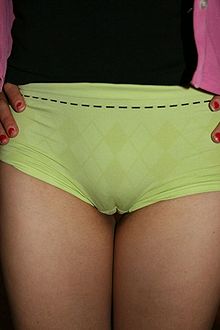 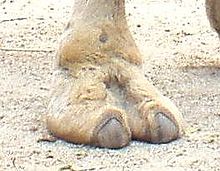 The forefoot of a camel, an even-toed ungulate
For the comedy album by The Bob & Tom Show, see Camel Toe (album).

Camel toe is a slang term that refers to the outline of a human female's labia majora, as seen through tightly fitting clothes.[1][2]

The causes of camel toe are not always obvious.[3][4] Camel toe commonly occurs as a result of wearing tight fitting clothes, such as shorts, hotpants, or swimwear.[4] Due to a combination of anatomical factors and the snugness of the fabric, the crotch and pudendal cleft may take on a resemblance to the forefoot of a camel.

Some fashion analysts have identified clothing design as a cause, rather than its size. Camel toe may thus be exacerbated by garments with a tight central seam that serves to divide the labia majora.[5][6]

Uncleft "bulges" are more often visible. The degree to which a woman's mons pubis protrudes depends on a number of factors, including body weight, distribution of adipose tissue and genetic variation in anatomy.[7]

For the city in Saskatchewan, see Moose Jaw.

Male organs showing through clothes at the crotch may be referred to as a "moose knuckle".[8]