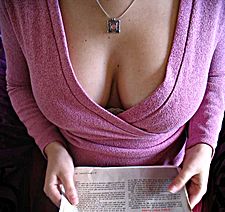 Cleavage, anatomically known as the intramammary cleft, is the space between a woman's breasts lying over the sternum. Cleavage is exposed by a garment with a low neckline, such as ball gowns, evening gowns, swimwear, casual tops and other garments.

When the lateral aspects of the breasts are uncovered, it is known as side cleavage, sidewinders or sideboob.[2][3]

Exposure of the underside of the breast, such as below an extremely short crop top, is known as neathage (a blend of underneath and cleavage), Australian cleavage (because of the reference to Australia as down-under), bottom cleavage, reverse cleavage or underboob.[2][3] 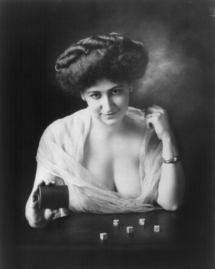 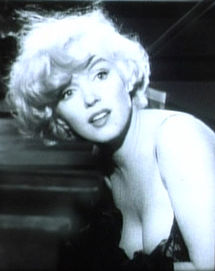 Marilyn Monroe displaying cleavage in Some Like it Hot

In European society, décolletage was often a feature of the dress of the late Middle Ages. This continued through the Victorian period. Ball or evening gowns especially featured décolletage designed to display and emphasize cleavage.[4][5]

In many European societies between the Renaissance and the 19th century, wearing low-cut dresses which exposed breasts was more acceptable than today; with a woman's bared legs, ankles, or shoulders being considered to be more risqué than exposed breasts.[6]

In aristocratic and upper-class circles the display of breasts was at times regarded as a status symbol, as a sign of beauty, wealth or social position.[7] The bared breast even invoked associations with nude sculptures of classical Greece that were exerting an influence on art, sculpture, and architecture of the period.[8]

In the French Enlightenment, there was a debate as to whether a woman's breasts were merely a sensual enticement or rather a natural gift to be offered from mother to child. In Alexandre Guillaume Mouslier de Moissy's 1771 play The True Mother (La Vraie Mère), the title character rebukes her husband for treating her as merely an object for his sexual gratification: "Are your senses so gross as to look on these breasts – the respectable treasures of nature – as merely an embellishment, destined to ornament the chest of women?"[9] Nearly a century later, also in France, a man from the provinces who attended a Court ball at the Tuilleries in Paris in 1855 was deeply shocked by the décolleté dresses and is said to have exclaimed in disgust: "I haven't seen anything like that since I was weaned!"[10]

For ordinary wear, high collars were, however, the norm for many years.

Lingerie has long been designed to emphasize cleavage.

Décolletage, which is the form of the neckline, is an aspect of woman's fashion. As such, popular necklines change over time and for different occasions. Women's swimsuits and bikinis commonly have very low necklines which result in the tops and sides of breasts being exposed. Evening dresses often have low to extremely low necklines. Such dresses are often considered a sign of elegance and sophistication on many formal social occasions. Also, modern Western fashions favour open neck styles.

Many women regard breasts as an important female secondary sex characteristic,[11] and a factor in their sexual attractiveness. They identify their femininity and sense of self with their breasts. Historically women have, in appropriate situations, displayed their breasts and femininity with pride, within the limits of community and personal standards of modesty.

Various methods have been used by women in history to accentuate breasts. For example, corsets that enhanced cleavage were introduced in the mid-16th century.[12] By the late 18th century cleavage enhancing corsets grew more dramatic in pushing the breasts upwards.[13] The tight lacing of corsets worn in the 19th and early 20th centuries emphasized both cleavage and the size of the bust and hips. Ball or evening gowns especially were designed to display and emphasize the décolletage.[14][15]

More recently, after corsets became unfashionable, brassieres and padding have served to project, display and emphasize the breasts. Several brassiere manufacturers, among them Wonderbra and Victoria's Secret, produce bras that enhance cleavage.

At times, some women seek to enhance their sexual attractiveness by remedying what they consider a deficiency in their breasts. This may be by the use of an artificial device or by surgery. Surgery may be for breast augmentation or reduction.

Low necklines usually result in the exposure of breasts or cleavage. Showing the nipples or areolae is almost always considered toplessness or partial nudity. In Western and some other societies, there are differences of opinion as to how much cleavage exposure is acceptable in public.[16] In contemporary Western society, the extent to which a woman may expose her breasts depends on social and cultural context. Though displaying cleavage can be permissible in many settings, it may be prohibited by dress codes in settings such as workplaces, churches and schools, where exposure of any part of female breasts may be considered inappropriate.

Some people became shocked when it became fashionable, around 1913, for dresses to be worn with a modest round or V-shaped neckline. In the German Empire, for example, all Roman Catholic bishops joined in issuing a pastoral letter attacking the new fashions.[17] Fashions became more restrained in terms of décolletage, while exposure of the leg became more accepted in Western societies, during World War I and remained so for nearly half a century.[18] From the 1960s onward, however, greater sexual permissiveness lead to increasing displays of cleavage in films, on television, and in everyday life, and low-cut dress styles became very common, even for casual wear.

In 1953, Hollywood film The French Line was found objectionable under the Hays Code because of Jane Russell's "breast shots in bathtub, cleavage and breast exposure" while some of her decollete gowns were regarded to be "intentionally designed to give a bosom peep-show effect beyond even extreme decolletage".[19]

In the United States, in two separate incidents in 2007, Southwest Airlines crews asked travelers to modify their clothing, to wear sweaters, or to leave the plane because they did not consider the amount of cleavage displayed to be acceptable.[20]

German Chancellor Angela Merkel created controversy when she wore a low-cut dress to the opening of the Oslo Opera House on 12 April 2008.[21][22]

I interviewed a young anthropologist working with women in Mali, in a country in Africa where women go around with bare breasts. They're always feeding their babies. And when she told them that in our culture men are fascinated with breasts there was an instant of shock. The women burst out laughing. They laughed so hard, they fell on the floor. They said, "You mean, men act like babies?"

Carolyn Latteier, Breasts, the women's perspective on an American obsession[23]

British zoologist and ethologist Desmond Morris theorizes that cleavage is a sexual signal that imitates the image of the cleft between the buttocks,[24] which according to Morris in The Naked Ape is also unique to humans, other primates as a rule having much flatter buttocks.

Evolutionary psychologists theorize that humans' permanently enlarged breasts, in contrast to other primates' breasts, which only enlarge during ovulation, allowed females to "solicit male attention and investment even when they are not really fertile",[25] though Morris notes that in recent years there has been a trend toward reversing breast augmentations.[26][27] According to social historian David Kunzle, waist confinement and the décolletage are the primary sexualization devices of Western costume.[28] Also, in South Africa, Wonderbra sponsors a National Cleavage Day during which women are encouraged to display their cleavage.[29] Art historian James Laver argued that the changing standards of revealing the cleavage is more prominent in the evening dress than the day dress of women in the Western world.[30]

This audio file was created from a revision of Cleavage (breasts) dated JAN-06-2010, and does not reflect subsequent edits to the article. (Audio help)
More spoken articles