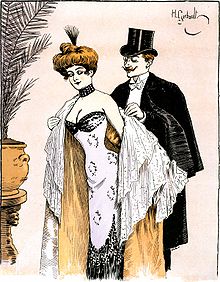 "Would you take offense if I had the gall to plant a kiss on this beautiful shoulder?"
"You'll figure that out soon enough after the deed."

Flirting (or coquetry) is a playful, romantic or sexual overture by one person to another subtly indicating an interest in a deeper relationship with the other person, and can involve verbal communication as well as body language. A female flirt, especially a young one, is sometimes called a coquette; but when a man flirts with a woman it is sometimes referred to as gallantry or chivalry.

Flirting usually involves speaking and behaving in a way that suggests a mildly greater intimacy than the actual relationship between the parties would justify, though within the rules of social etiquette, which generally disapproves of a direct expression of sexual interest. This may be accomplished by communicating a sense of playfulness or irony. Double entendres, with one meaning more formally appropriate and another more suggestive, may be used. Body language can include flicking the hair, eye contact, brief touching, open stances, proximity etc. Verbal communication of interest can include the vocal tone, such as pace, volume, intonation. Challenges (teasing, questions, qualifying, feigned disinterest) serve to increase tension, test intention and congruity.

Flirting behaviour varies across cultures due to different modes of social etiquette such as how closely people should stand (proxemics), how long to hold eye contact, and so forth.[1] However, ethologist Irenäus Eibl-Eibesfeldt found that in places as different as Africa and North America, women do exactly the same prolonged stare followed by a head tilt away with a little smile.[citation needed]

In order to bond or to express sexual interest, people flirt. According to Kate Fox, there are two main types of flirting: flirting for fun and flirting with intent.[2] Flirting for fun can take place between friends, co-workers, or total strangers that wish to get to know each other. This type of flirting does not intend to lead to sexual intercourse or romantic relationship, but increases the bonds between two people.

Flirting with intent plays a role in the mate-selection process. The person flirting will send out signals of sexual availability to another, and expects to see the interest returned in order to continue flirting. Flirting can involve non-verbal signs, such as an exchange of glances, hand-touching, hair-touching, or verbal signs, such as chatting up, flattering comments, and exchange of telephone numbers in order to initiate further contact.

Increasingly in the 21st century flirting is taking forms in instant messaging, and other social media. In 2011 Tagged conducted a summer-long survey based on "winks" by metro area, with the surprise leader being Pittsburgh [1]. 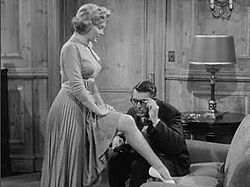 People flirt for a variety of reasons. Flirting can indicate an interest in a deeper personal relationship with another person. Some people flirt simply for amusement, with no intention of developing any further relationship. This type of flirting sometimes faces disapproval from others, either because it can be misinterpreted as more serious, or it may be viewed as cheating if either person is already in a committed relationship with someone else.

The origin of the word flirt is obscure. The Oxford English Dictionary (first edition) associates it with such onomatopoeic words as flit and flick, emphasizing a lack of seriousness; on the other hand, it has been attributed to the old French conter fleurette, which means "to (try to) seduce" by the dropping of flower petals, that is, "to speak sweet nothings". While old-fashioned, this expression is still used in French, often mockingly, but the English gallicism to flirt has made its way and has now become an anglicism. 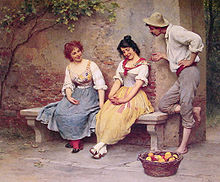 The Flirtation by Eugene de Blaas. A study of body language: a man flirting.

Flirting varies a great deal from culture to culture. For example, for many western cultures one very common flirting strategy includes eye contact. In these cultures, it is said that a look can say a million words.[3] It includes what is referred to as peacocking where a man wears attention grabbing and fancy clothes to attract women.[4] However, eye contact can have a very different meaning in some Asian countries. Men, however, may stare at Western women in such countries who might get in trouble if returning the glance. This act may mean that she is sexually interested instead of just flirting. Furthermore, Chinese and Japanese women are not expected to initiate eye contact which would be considered rude and disrespectful.[5][unreliable source?]

The distance between two people is also important when flirting. People from the "contact cultures", such as the Mediterranean or Latin America, may feel comfortable with closer distances whereas a British or Northern European person will need more space. Touching, especially of the hand or arm, is also part of flirting.[6]

During World War II, anthropologist Margaret Mead was working in Britain for the British Ministry of Information and later for the U.S. Office of War Information,[7][8] delivering speeches and writing articles to help the American soldiers better understand the British civilians,[9] and vice versa.[10] She observed in the flirtations between the American soldiers and British women a pattern of misunderstandings regarding who is supposed to take which initiative. She wrote of the Americans, "The boy learns to make advances and rely upon the girl to repulse them whenever they are inappropriate to the state of feeling between the pair", as contrasted to the British, where "the girl is reared to depend upon a slight barrier of chilliness... which the boys learn to respect, and for the rest to rely upon the men to approach or advance, as warranted by the situation." This resulted, for example, in British women interpreting an American soldier's gregariousness as something more intimate or serious than he had intended.[7]

Communications theorist Paul Watzlawick used this situation, where "both American soldiers and British girls accused one another of being sexually brash", as an example of differences in "punctuation" in interpersonal communications. He wrote that courtship in both cultures used approximately 30 steps from "first eye contact to the ultimate consummation", but that the sequence of the steps was different. For example, kissing might be an early step in the American pattern but a relatively intimate act in the English pattern.[11]

Japanese courtesans had another form of flirting, emphasizing non-verbal relationships by hiding the lips and showing the eyes, as depicted in much Shunga art, the most popular print media at the time, until the late 19th century.

The fan was extensively used as a means of communication and therefore a way of flirting from the 16th century onwards in some European societies, especially England and Spain. A whole sign language was developed with the use of the fan, and even etiquette books and magazines were published. Charles Francis Badini created the Original Fanology or Ladies' Conversation Fan which was published by William Cock in London in 1797. The use of the fan was not limited to women, as men also carried fans and learned how to convey messages with them. For instance, placing the fan near your heart meant "I love you", while opening a fan wide meant "Wait for me".[12]

In Spain, where the use of fans (called "abanicos") is still very popular today, ladies used them to communicate with suitors or prospective suitors without their family or chaperon finding out. This use was highly popular during the 19th and early 20th centuries.[13] 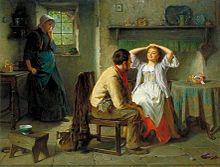 A study in body language: Haynes King's Jealousy and Flirtation

Flirting may consist of stylized gestures, language, body language, postures, and physiologic signs which act as cues to another person. Among these, at least in Western society, are:

The effectiveness of these several interactions has been subjected to detailed analysis by behavioral psychologists, and advice on their use is available from dating coaches.