NCR Corporation (NYSE: NCR) is an American technology company specializing in kiosk products for the retail, financial, travel, healthcare, food service, entertainment, gaming and public sector industries. Its main products are self-service kiosks, point-of-sale terminals, automated teller machines, check processing systems, barcode scanners, and business consumables. They also provide IT maintenance support services. From 1988 to 1997 they sponsored the NCR Book Award for non-fiction. NCR had been based in Dayton, Ohio, starting in 1884, but in June 2009, the company sold most of the Dayton properties and moved its headquarters to Metro Atlanta. Currently the headquarters are in unincorporated Gwinnett County, Georgia, near Duluth.[5][6]

The company was founded in 1884 and acquired by AT&T in 1991. A restructuring of AT&T in 1996 led to NCR's re-establishment on 1 January 1997 as a separate company, and involved the spin-off of Lucent Technologies from AT&T. NCR is the only AT&T acquisition that retained its original name – all the others have either been purchased or renamed following subsequent mergers. 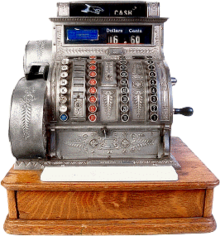 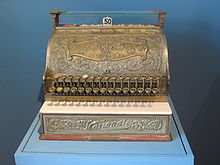 The company began as the National Manufacturing Company of Dayton, Ohio, which was established to manufacture and sell the first mechanical cash register, invented in 1879 by James Ritty. In 1884 the company and patents were bought by John Henry Patterson and his brother Frank Jefferson Patterson and the firm was renamed the National Cash Register Company. Patterson formed NCR into one of the first modern American companies, introducing new, aggressive sales methods and business techniques. He established the first sales training school in 1893, and introduced a comprehensive social welfare program for his factory workers.

Other significant figures in the early history of the company were Charles F. Kettering, Thomas J. Watson, Sr. and Edward A. Deeds. Deeds and Kettering went on to found Delco Electronics which became a division of General Motors. Watson eventually worked his way up to general sales manager. Bent on inspiring the dispirited NCR sales force, Watson introduced the motto "THINK!" Signs with this motto were erected in factory buildings, sales offices, and club rooms during the mid-1890s. "THINK" later became a widely-known symbol of IBM. Kettering designed the first cash register powered by an electric motor in 1906. Within a few years he developed the Class 1000 register which was in production for 40 years, and the O.K. Telephone Credit Authorization system for verifying credit in department stores.[citation needed]

When John H. Patterson and his brother took over the company, cash registers were expensive ($50 USD) and only about a dozen of "Ritty's Incorruptible Cashier" machines were in use. There was little demand for the expensive device, but Patterson believed the product would sell once shopkeepers understood it would drastically decrease theft by salesclerks. He created a sales force, called the "American Selling Force" which worked on commissions and followed a standard sales script, the "N.C.R. Primer." The philosophy was to sell a business function, rather than just a piece of machinery. Sale demonstrations were set up in hotels (away from the distractions of the buyer's business), depicting a store interior, complete with real merchandise and real cash. The sale prospect was described as the "P.P." or "Probable Purchaser." Once initial objections were swept aside and the P.P. admitted to internal theft losses, the product was demonstrated, along with large business charts and diagrams. The deal was sealed with a 25 cent cigar.[7]

NCR expanded quickly and became multi-national in 1888. Between 1893 and 1906 it acquired a number of smaller cash register companies.[8]

By 1911 it had sold one million machines and grown to almost 6,000 employees. Combined with rigorous legal attacks, Patterson's methods enabled the company to fight off, bankrupt or buy-out over 80 of its early competitors and achieve control of 95% of the U.S. market.

In 1912, the company was found guilty of violating the Sherman Antitrust Act. Patterson, Deeds, Watson, and 25 other NCR executives and managers were convicted for illegal anti-competitive sales practices and were sentenced to one year of imprisonment. Their convictions were unpopular with the public due to the efforts of Patterson and Watson to help those affected by the Dayton, Ohio floods of 1913, but efforts to have them pardoned by President Woodrow Wilson were unsuccessful. However, their convictions were overturned on appeal in 1915 on the grounds that important defense evidence should have been admitted.

Two million units were sold by 1922, the year John Patterson died. In 1925 the company went public with an issue of $55 million in stock, at that time the largest public offering in United States history. During World War I the company manufactured shell fuzes and aircraft instrumentation, and during World War II built aero-engines, bomb sights and code-breaking machines, including the American bombe designed by Joseph Desch. 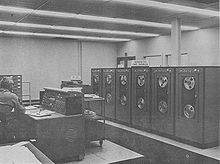 In 1962, NCR introduced the NCR-315 Electronic Data Processing System which included the CRAM storage device, the first automated mass storage alternative to magnetic tape libraries accessed manually by computer operators. The NCR 390 and 500 computers were also offered to customers who did not need the full power of the 315. The company's first all-integrated circuit computer was the Century 100 of 1968. The Century 200 was added in 1970. The line was extended through the Century 300, NCR's first multiprocessor system. The Century series was followed by the Criterion series in 1976, NCR's first virtual machine system.

During this period NCR also produced the 605 minicomputer for in-house use. It was the compute engine for the 399 and 499 accounting machines, several generations of in-store and in-bank controllers, and the 82xx/90xx IMOS COBOL systems. The 605 also powered peripheral controllers, including the 658 disk subsystem and the 721 communications processor.

By 1986 the number of mainframe makers had dropped from 8 (IBM and the "seven dwarfs") to 6 (IBM and the "BUNCH") to 4: IBM, Unisys, NCR, and Control Data Corporation.

The company adopted the name NCR Corporation in 1974.

In 1982, NCR became involved in open systems architecture. Its first such system was the UNIX-powered TOWER 16/32, the success of which (approximately 100,000 were sold) established NCR as a pioneer in bringing industry standards and open systems architecture to the computer market. These 5000-series systems were based on Motorola 680xx CPUs and supported NCR's proprietary transaction processing system TMX, which was mainly used by financial institutions.

In the 1980s, NCR sold various PC compatible AT-class computers, like the small form factor NCR-3390 (called an "intelligent terminal"). They proposed a customized version of MS-DOS, NCR-DOS, which for example offered support for switching the CPU between 6, 8 or 10 MHz speeds. The computers featured an improved CGA adapter, the NGA, which had a 640×400 text mode more suitable for business uses than the original 640x200 mode, with characters drawn using single-pixel-wide lines, giving an appearance similar to that of classic IBM 3270 terminals. The additional four-color 640×400 graphical mode was identical to CGA's 320×200 mode from a programming point of view.

In 1990, NCR introduced the System 3000, a seven-level family of computers based on Intel's 386 and 486 CPUs. The majority of the System 3000 range utilised IBM's Micro Channel architecture rather than the more prevalent ISA architecture, and utilised SCSI peripherals as well as the more popular parallel and serial port interfaces, resulting in a premium product with premium pricing.

Automated Teller Machines (ATMs) are now NCR's principal product line. NCR had made its first ATM in the late 1970s with widespread installations of the model 770 in National Westminster and Barclays Banks throughout the UK, but it was not until the Model 5070, developed at its Dundee plant in Scotland and introduced in 1983 that the company began to make more serious inroads into the ATM market. Subsequent models included the 5084, 56xx, and 58xx (Personas) series. In early 2008 the company launched its new generation of ATMs - the 662x/663x SelfServ series. NCR currently commands over a third of the entire ATM market, with an estimated $18 trillion being withdrawn from NCR ATMs every year. In addition, NCR's expertise in this field led the company to contract with the U.S. Military to support the Eagle Cash program with customized ATMs.[11]

The NCR 5xxx-series is the range of (ATM's) produced by NCR from the early 1980s. Most models were designed and initially manufactured at its Dundee factory in Scotland, but later produced at several other locations around the world.

There have been several distinct generations:

Enhanced functions such as colour displays and improved security and usability functions became available. The introduction of Media Entry Indicators (MEI) which highlight the card entry slot to the customer was also a part of this series. Some 56xx machines produced between 1994–1996 were badged as AT&T rather than NCR, mirroring the company's brief ownership under the telecoms giant in the mid 1990s. 56xx models have included the 5670 (interior lobby cash dispense only), 5675 (interior lobby multifunction - dispense & deposit), 5684 (exterior TTW dispense only), 5688 (exterior TTW drive-up multifunction) and 5685 (exterior TTW multifunction).

NCR's 6th generation of ATMs have been noted for the further move towards intelligent deposit and the expansion of secondary functions such as barcode reading.

This series is a complete redesign of both outlook and technological contents. It is also a cost down product.

On February 15th, 1995, the company sold its microelectronics division and storage systems division to Hyundai which named it Symbios Logic. At the time it was the largest purchase of an American company by a Korean company.

For a while, starting in 1994, the subsidiary was renamed AT&T Global Information Solutions, but in 1995, AT&T decided to spin off the company, and in 1996, changed its name back to NCR in preparation for the spin-off. The company outlined its reasons for the spin-off in an Information Statement sent to its stockholders, which cited, in addition to "changes in customer needs" and "need for focused management time and attention", the following:

The Montgomery County Historical Society and NCR Corporation joined in 1998 into an innovative partnership committed to preserving the voluminous NCR Archive. For more than three months in late 1999, trucks traveled between NCR's Building 28 and the Historical Society's Research Center, taking three million pieces of an extraordinary collection to their new home.

Today, NCR's R&D activity is split between its three major centres in Atlanta USA (Retail), Dundee, Scotland (Financial Industry), and Waterloo, Canada. It also has R&D centres in Puducherry and Hyderabad in India.[15] NCR also has a manufacturing facility at Puducherry in India, which is a regional manufacturing and export hub.

On January 8, 2007, NCR announced its intention to separate into two independent companies by spinning off Teradata to shareholders. Bill Nuti will continue in his current role as president and CEO of NCR, while Teradata Senior VP Mike Koehler will assume leadership of Teradata.[1]

On 1 October 2007, NCR Corporation and Teradata jointly announced the Teradata business unit spin-off was complete, with Michael Kohler as the first CEO of Teradata.[2]

On January 11, 2007, NCR announced plans to restructure its entire ATM manufacturing operations, with 650 jobs at its Dundee plant being cut [3] A further 450 jobs were cut in Waterloo, Ontario, Canada. In 2009 , the Dundee manufacturing facility was closed, citing global economic conditions as the reason. 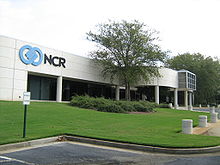 On June 2, 2009, NCR announced a plan to relocate its corporate headquarters from Dayton, OH to Duluth, GA. This news was shocking as Dayton served as NCR's home for 125 years. [6] "The decision to consolidate functions in Georgia and build a technology focused corporate headquarters campus is right in line with our business strategy to drive growth, improve our innovation output, increase productivity and continually upgrade our focus on the customer," said Bill Nuti, NCR’s chairman and chief executive officer.

On July 11, 2011, NCR agreed to purchase Radiant Systems, a hospitality and retail systems company, for US$1.2B. NCR plans to turn Radiant into a new business division that is focused hospitality and specialty retail. Several Radiant executives will remain on board and will be led by the company’s chief operating officer, Andrew Heyman. “Radiant Systems is a logical and strategic extension for NCR, moving us into attractive fast-growth adjacent markets,” Bill Nuti, NCR’s chairman and chief executive, said in a statement. “We will bring together two strong teams with Radiant Systems playing a vital role in enhancing our long-term growth, margin expansion and earnings appreciation.”[7]

On August 22, 2011, Radiant announced the completion of the tender offer by NCR Corporation. [16]

On August 24, 2011, NCR Corporation completed the acquisition of Radiant Systems. [17] 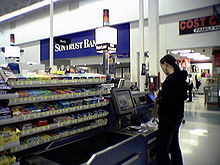