WaveLAN was originally designed by COMTEN, a subsidiary of NCR Corporation, (later the Network Products Division of NCR) in 1986-7, and introduced to the market in 1988 as a wireless alternative to Ethernet and Token-Ring. The next year NCR contributed the WaveLAN design to the IEEE 802 LAN/MAN Standards Committee.[citation needed] This led to the founding of the 802.11 Wireless LAN Working Committee which produced the original IEEE 802.11 standard, which eventually became known popularly as Wi-Fi. When NCR was acquired by AT&T in 1991, becoming the AT&T GIS (Global Information Solutions) business unit, the product name was retained, as happened two years later when the product was transferred to the AT&T GBCS (Global Business Communications Systems) business unit, and again when AT&T spun off their GBCS business unit as Lucent in 1995. The technology was also sold as WaveLAN under an OEM agreement by Epson, Hitachi,and NEC, and as the RoamAbout DS by DEC.[1] It competed directly with Aironet's non-802.11 ARLAN lineup, which offered similar speeds, frequency ranges and hardware.

During this time frame, networking professionals also realized that since Netware 3.x and 4.x supported the WaveLAN cards and came with a Multi Protocol Router module that supported the IP/IPX RIP and OSPF routing protocols, one could construct a wireless routed network using Netware servers and WaveLAN cards for a fraction of the cost of building a wireless bridged network using WaveLAN access points.[4] Many Netware classes and textbooks of the time included a Netware OS CD with a 2-person license, so potentially the only cost incurred came from hardware.[5]

When the 802.11 procotol was ratified, Lucent began producing chipsets to support this new standard under the name of WaveLAN IEEE, which it later renamed to ORiNOCO. Shortly thereafter, Lucent spun off the division that produced these chipsets as Agere, which was later acquired by Proxim. Proxim later renamed its entire 802.11 wireless networking lineup to ORiNOCO, including products based on Atheros chipsets.[6]

Classic WaveLAN operates in the 900 MHz or 2.4 GHz ISM bands. Being a proprietary pre-802.11 protocol, it is completely incompatible with the 802.11 standard.

The ISA and MCA cards were based on the Intel 82586 Ethernet PHY controller, which was a commonly used controller in its time and was found in many ISA and MCA Ethernet cards, such as the Intel EtherExpress 16 and the 3COM 3C523[7]. The PCMCIA cards used the Intel 82593 PHY controller. The radio modem section was hidden from the OS, thus making the WaveLAN card appear to be a typical Ethernet card, with the radio-specific features taken care of behind the scenes.[8]

While the 900 MHz models and the early 2.4 GHz models operated on one fixed frequency, the later 2.4 GHz cards as well as some 2.4 GHz WavePoint access points had the hardware capacity to operate over ten channels, ranging from 2.412 GHz to 2.484 GHz, with the channels available being determined by the region-specific firmware.[9]

For security, WaveLAN used a 16-bit NWID (NetWork ID) field, which yielded 65,536 potential combinations; the radio portion of the device could receive radio traffic tagged with another NWID, but the controller would discard the traffic. DES encryption (56-bit) was an option in some of the ISA and MCA cards and all of the WavePoint access points. The full-length ISA and MCA cards had a socket for an encryption chip, the half-length 915 MHz ISA cards had solder pads for a socket which was never added, and the 2.4 GHz half-length ISA cards had the chip soldered directly to the board.

There are two large holes in the WaveLAN security strategy, though:

Several open-source projects, such as NdisWrapper and Project Evil, currently exist that allow the use of NDIS drivers via a "wrapper". This allows non-Windows OS' to utilize the near-universal nature of drivers written for the Windows platform to the benefit of other operating systems, such as Linux, FreeBSD, and ZETA. 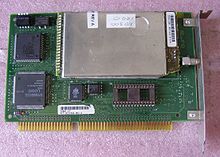