Culver’s is a privately owned and operated fast casual restaurant chain that operates primarily in the Midwestern United States. The first Culver’s opened in 1984 in Sauk City, Wisconsin. Since then, it has grown to over 425 restaurants stretching from Tennessee, Kentucky and Ohio to Wyoming, Colorado and Utah; from Arizona and Texas to North Dakota.[1]

In 1984, Sauk City restaurateur George Culver purchased the A&W on Phillips Boulevard (U.S. Highway 12) and began renovating it. On July 18, 1984, along with wife Ruth, son Craig, and daughter-in-law Lea, he opened the first Culver’s Frozen Custard and ButterBurgers. The restaurant struggled mightily at the beginning, losing money the first year but breaking even the second. As Craig Culver recalls it, “It was pretty lonely, to tell you the truth. If I were a smarter business man, I’d have gotten out of it.”[citation needed] However, by the third year, the concept seemed to have caught on, and Culver’s showed its first profit.[citation needed]

With the success of the new restaurant,[citation needed] it didn’t take long before someone wanted to copy it. In 1987, the Culvers were approached about franchising a restaurant in nearby Richland Center. More flattered than anything else, the Culvers quickly agreed, granting the franchisee a loose licensing agreement, charging no fees or royalties. Because the franchisee had invested very little of his own money, it was a simple matter for him to walk away a year later when he decided he no longer wanted to be in the restaurant business.

The Culvers quickly learned a number of important lessons from their only franchising failure. They established a set of standard franchising procedures which form the base for those currently used by Culver Franchising System, Inc. Three years later, they tried again in Baraboo and business quickly doubled. Soon after, the increased recognition that the second store earned this small-town chain prompted expansion into the Madison and Milwaukee areas. At the end of 2009, 413 Culver's restaurants were open in 17 states.

As Culver’s expanded throughout Wisconsin, they began receiving applications for franchises outside of the state. At the time, Culver's was still a small, local chain, with only 14 restaurants across southern Wisconsin as of 1993. However, despite initial trepidation about how these stores would fare outside of the Badger State, Culver’s eventually acquiesced. The first restaurant in Buffalo, Minnesota, opened in September 1995 and Illinois in December 1995, and one in Dubuque, Iowa, in November 1996.

February 1997 was also important for another reason. It was in that month that Craig’s sister, Georgia, helped open the first Culver’s in Texas. The leapfrog down to Texas was significant in a number of respects. Firstly, Texans had had little exposure to this Wisconsin chain. There were no Culver’s on its borders as had been the case with Illinois, Iowa, and Minnesota, and it was hundreds of miles away from corporate headquarters. The distance also affected the supply situation, making it more expensive to get products to the restaurants. Thirdly, the distance between Texas and the other four states meant that advertising was limited and largely ineffective. The thousand miles between Austin and the nearest Culver’s market meant that for the first few years, television advertising was completely out of the picture.

Number of Culver’s per state, as of February 2011.

However, the Texas leapfrog represents the proverbial “exception that proves the rule”. According to Vice President in Charge of Franchise Development, Gary Rudsinski, “If it hadn’t been Craig [Culver]’s sister, we wouldn’t have gone into Texas like we did.” This quote belies the current franchising strategy of contiguous growth at a pace of about 40 new stores per year as is evidenced by the concentrically expanding swath of ‘blue states’. This strategy was evident in the chain's cautious contiguous expansion into Colorado Springs, Colorado, Cheyenne, Wyoming, and Mason, Ohio in 2005, followed by a new opening in Bowling Green, Kentucky in July 2006. While Culver's is still regarded as a small regional chain, this expansion into new states and new areas of the U.S. represents an important development in franchising strategy as Culver's shifts its attention to developing markets beyond the Midwest.

Culver’s has recently expanded to the Phoenix metropolitan area. According to a March 2007 article in The Arizona Republic, Culver's hopes that the two restaurants opened in north Phoenix and the eastern suburb of Mesa in the Fall of 2007 would be the first of "up to 30" such franchises in the Phoenix Valley.[2] As of February 2011, Arizona has 10 Culver's locations.

While Arizona technically shares a border with Colorado, before the Deer Valley and Mesa locations opened, Phoenix was over 800 miles away from the nearest Culver’s in Colorado Springs. The expansion is also significant in that it brings Culver’s into direct competition with In-n-Out Burger, a California-based burger chain with a reputation on the West Coast rivaling that of Culver’s in the Midwest.

The same article in The Arizona Republic also mentions that Arizona was chosen as an expansion site over the state of Florida. The large number of snowbirds who have relocated permanently or temporarily to Florida from the Midwest (similar to what also occurs in Arizona), in conjunction with the estimated 70 or so calls that Culver's receives annually from prospective franchisees in the Sunshine State suggests that it is extremely likely that Culver's will be expanding there as well in the near future.

In 2011, Culver's expanded into Utah, when Kristin and Tom Davis of Wisconsin relocated to Utah and opened a 100 seat Culver's franchise in Midvale. The couple signed a development agreement for four locations in the southern half of Salt Lake County and "can do more after that" if wanted.[3]

The company website lists Idaho, Arkansas, North Carolina, and South Carolina as new states in which it is looking to establish a presence.[4]

One important aspect of Culver's future expansion strategy hinges on the success of the Metro-98 prototype. Developed in 2006 and first constructed in Fort Dodge, Iowa, the Metro-98 is much more compact than the traditional 120-seater commonly built through much of Culver's expansion. While the Metro-98 has less seating to offer guests, it also reduces the amount of land needed for construction by around 20%. Culver's hopes that the smaller size and lower startup costs will enable them to penetrate urban markets such as Chicago, St. Louis, Dallas, and Denver where space is at a premium. Another significant departure from the traditional design is the flat roof in place of the sloped blue roof that has become iconic of Culver's throughout the Midwest. Additionally, Culver's is considering the development of an even smaller 75-seat option at this time.[5]

Culver's Blue Spoon Cafe, opened its first store in Prairie du Sac, Wisconsin in 2000 as a soup-sandwich-salad restaurant. At one point it was called Blue Spoon Creamery Cafe.[6] The name Blue Spoon comes from the color of the spoons used at the Culver's fast-food restaurants.[7] A second store in Middleton, Wisconsin had been open for a couple years, but was closed in August 2010 due to finances.[8] 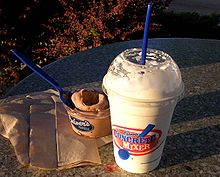 Chocolate custard and a Concrete Mixer at the West Milwaukee location.

Culver’s has an expansive menu that features Culver’s trademark ButterBurgers and frozen custard (which is also sold in bulk). The rest of the menu runs the gamut from pork and fish, fried chicken to salads and specialty sundaes. The menu can be divided up into seven separate sections: sandwiches, sides, drinks, kids meals, dinners, salads, and desserts. Items are made to order and are served at tableside.

Culver's also features its own brand of root beer.