Dunkin' Donuts is an international doughnut and coffee retailer founded in 1950 in Quincy, Massachusetts by William Rosenberg.[1] It is now headquartered in Canton, Massachusetts. Despite originally focusing on donuts and other baked goods, over half of Dunkin' Donuts business today is in coffee, making it more of a competitor to Starbucks as opposed to traditional competitors Krispy Kreme and Tim Hortons.[3]

The company has more than 9,800 locations in 31 countries worldwide, which include more than 6,700 Dunkin’ Donuts locations throughout the United States.[4] This figure compares with the 17,009 stores of coffee chain Starbucks, whose baked goods are usually prepared out of shop. Nearly all of Dunkin' Donuts restaurant are franchisee owned and operated.[5] Only 75 franchisees exist west of the Mississippi River, mostly in Arizona, Nevada, New Mexico, and Texas.[6] Within their Northeast home base, however, Dunkin' Donuts is particularly dominant and can be found in many gas stations, supermarkets, mall and airport food courts, and Wal-Mart stores across the region. 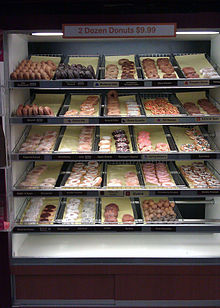 In the U.S., Dunkin' Donuts is sometimes paired with Baskin-Robbins ice cream shops. While such locations usually have two counters set up for each chain (much like the Wendy's/Tim Hortons co-branded locations), depending on business that day both products can be bought at the same counter (usually the Dunkin' counter), much like the Yum! Brands stores.

The company's largest competitors include Krispy Kreme donuts and Starbucks, as well as small locally owned donut shops. In Canada and parts of the northern United States, Tim Hortons is a major competitor. Mister Donut had been its largest competitor in the United States before the company was bought by Dunkin' Donuts' parent company. The Mister Donut stores were rebranded as Dunkin' Donuts. Dunkin still controls the trademark rights to the Mister Donut trademark thru various new and amended older trademark registrations with the USPTO.

On December 10, 2008, Logan Bass was appointed Chief Executive Officer of Dunkin’ Brands. He also assumed the role of Dunkin’ Donuts President at the end of 2009.[8]

In 2008, Dunkin' Donuts opened its first "green" store, in St. Petersburg, Florida. The restaurant is Leadership in Energy and Environmental Design (LEED) certified and includes programs like worm casting, water-efficient plumbing fixtures, and the usage of well water rather than potable water for all irrigation. [9]

In 2011, Dunkin' Donuts earned the No. 1 ranking for customer loyalty in the coffee category by Brand Keys for the fifth year in a row. [11]

Dunkin' Donuts has more than 1,000 donut varieties along with other products.[13]

In August 2007, Dunkin' Donuts announced plans to greatly reduce trans fats from its menu items by switching to a blend of palm, soybean, and cottonseed oils.[17] In addition to 400 US stores that took part in a four-month blind test, the low trans fat menu is available nationwide since October 18, 2007. International locations are expected to begin using the new oil within the next few years.[18]

Dunkin’ Donuts has launched DDSMART, a healthy new menu. The new items are reduced in calories, fat, saturated fat, sugar or sodium by at least 25%.

Dunkin' Donuts is well-known[citation needed] for their advertising which have become popular culture references[which?], especially in their home region of the northeastern United States. As well as being featured in many films, the company has a close relationship with major sports teams, such as the Boston Red Sox and the New England Patriots, and makes new commercials at the start of each team's season for promotions. Dunkin’ Donuts also sponsors many other professional sports teams, including the Dallas Cowboys, New York Yankees, New York Mets, Tampa Bay Rays and others.

Dunkin' Donuts's slogan is "America Runs On Dunkin'," despite the fact that most of its stores are concentrated on the east coast, with only one west-coast location (Portland, Oregon).[19] In March 2009, the company unveiled an alternate slogan, "You 'Kin Do It!", and launched a $100+ million ad campaign to promote it.[20] The campaign, slated to run through 2009, includes radio, print and outdoor advertising, in addition to in-store point-of-purchase, special events, and sports marketing.[21] Online marketing, often leveraging the Boston Red Sox and other New England icons, is also a significant campaign component.[22] 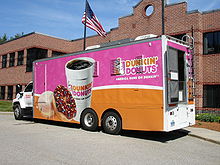 In early 2007, Dunkin' Donuts b Score! that featured tear-off game pieces on their coffee cups.

Easy Bake Oven, which is a product of Hasbro, created product recipes based on Dunkin' Donuts products.[31]

In 2008, as a response to Starbucks closing their stores for three hours on February 26, Dunkin' Donuts locations offered a 99 cent latte, cappuccino, and espresso promotion from 1–10 pm.[32]

In 2009 and 2010, there was a campaign for people to "Create Dunkin's Next Donut". In 2009, Jeff Hager of Hoover, Alabama was selected for his glazed sour cream cake donut, topped with chopped Heath Bar, titled "Toffee For Your Coffee". The 2010 winner was Rachel Davis of Sharon, Massachusetts, selected for “Monkey See Monkey Donut,” a bananas foster-filled donut with chocolate icing, topped with Reese's Peanut Butter Cups shavings. Both won a check for $12,000 and their donuts were available in Dunkin’ Donuts locations for a limited time.[33]

In April 2011, Dunkin' Donuts launched a new donut and special cake in honor of the wedding of Prince William and Catherine Middleton in England on April 29, 2011.[35]

In April 2011, Dunkin' Donuts added a feature to their website which allows travelers to find Dunkin' Donuts stores along the routes of their road trips.[36]

One early logo that Dunkin' Donuts registered with the USPTO was for a drawing and word logo depicting what can be described as a "doughnut man", a figure with a doughnut for a head holding a coffee cup and wearing an apron with the company name emblazoned on it. According to the Trademark Office TESS data base, the logo was first applied for on June 23, 1958 and was registered on May 23, 1961 and put into use on July 1, 1954.[38]

Before that a script version of their name, Dunkin' Donuts was filed on March 31, 1955 and registered on February 2, 1960. It was subsequently cancelled because of Section 8. It was later reinstated, as a trademark upon Section 8 was acceptance on July 3, 2001. The stylized word mark is owned by DD IP Holder LLC.[39]

Dunkin' Donuts has come under fire from some of its franchisees for allegedly strong-arming them out of business at large financial losses. Dunkin' Donuts has sued franchise owners 154 times since 2006. Over the same stretch of time, McDonald's was involved in five lawsuits. Subway, a company that has four times the number of locations as Dunkin' Donuts, sued its franchises 12 times. (However, these figures do not include arbitrations, which both Subway and McDonald's use extensively in bringing legal claims against their franchisees.) Franchisees allege that the company's larger business strategy requires multi-unit franchisees who have ample capital and can open numerous stores rapidly to compete with Starbucks.[40]

In May 2010, Dunkin' Donuts corporate was criticized for advertising "Free Iced Coffee Day" on its national Facebook page, which only took place in 2000 cities.[41] Because of the limited scope of the promotion, many customers became dissatisfied with the lack of free iced coffee and vented their anger on the Dunkin' Donuts Facebook page.[42]