The aardvark (Orycteropus afer, from Greek ορυκτερόπους (orykterópous) meaning "digging footed" and afer: from Africa) is a medium-sized, burrowing, nocturnal mammal native to Africa.[2] It is the only living species of the order Tubulidentata,[3] although other prehistoric species and genera of Tubulidentata are known.

It is sometimes colloquially called "antbear", "anteater", or the "Cape anteater" after the Cape of Good Hope. The name comes from the Afrikaans/Dutch[4] for "earth pig" or "ground pig" (aarde earth/ground, varken pig), because of its burrowing habits (similar origin to the name groundhog). The aardvark is not related to the pig; rather, it is the sole recent representative of the obscure mammalian order Tubulidentata, in which it is usually considered to form one variable species of the genus Orycteropus, the sole surviving genus in the family Orycteropodidae. The aardvark is not closely related to the South American anteater, despite sharing some characteristics and a superficial resemblance.[5] The closest living relatives of the aardvark are the elephant shrews, along with the sirenians, hyraxes, tenrecs, and elephants. With their extinct relatives, these animals form the superorder Afrotheria. 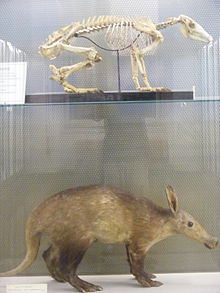 The aardvark is vaguely pig-like in appearance. Its body is stout with an arched back and is sparsely covered with coarse hairs. The limbs are of moderate length. The front feet have lost the pollex (or 'thumb'), resulting in four toes, while the rear feet have all five toes. Each toe bears a large, robust nail which is somewhat flattened and shovel-like, and appears to be intermediate between a claw and a hoof. The ears are disproportionately long, and the tail is very thick at the base and gradually tapers. The greatly elongated head is set on a short, thick neck, and the end of the snout bears a disc, which houses the nostrils. The mouth is small and tubular, typical of species that feed on termites. The aardvark has a long, thin, snakelike, protruding tongue and elaborate structures supporting a keen sense of smell.[citation needed]

An aardvark's weight is typically between 40 and 65 kilograms (88 and 140 lb). An aardvark's length is usually between 1 and 1.3 metres (3.3 and 4.3 ft), and can reach lengths of 2.2 metres (7 ft 3 in) when its tail (which can be up to 70 centimetres (28 in))[2] is taken into account. It is the largest member of the proposed clade Afroinsectiphilia. The aardvark is pale yellowish-gray in color and often stained reddish-brown by soil. The aardvark's coat is thin, and the animal's primary protection is its tough skin. The aardvark has been known to sleep in a recently excavated ant nest, which also serves as protection from its predators.[citation needed]

One of the most distinctive characteristics of the Tubulidentata is their teeth. Instead of having a pulp cavity, each tooth has a cluster of thin, upright, parallel tubes of vasodentin (a modified form of dentine), with individual pulp canals, held together by cementum. The teeth have no enamel coating and are worn away and regrow continuously. The aardvark is born with conventional incisors and canines at the front of the jaw, which fall out and are not replaced. Adult aardvarks only have cheek teeth at the back of the jaw, and have a dental formula of:

Genetically speaking, the aardvark is a living fossil, as its chromosomes are highly conserved, reflecting much of the early eutherian arrangement before the divergence of the major modern taxa.[6] 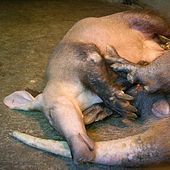 Aardvarks live in sub-Saharan Africa, where there is suitable habitat for them to live, such as savannas, grasslands, woodlands and bushland, and available food (i.e., ants and termites).[5] The aardvark is nocturnal and is a solitary creature that feeds almost exclusively on ants and termites (formicivore);[7] the only fruit eaten by aardvarks is the aardvark cucumber. An aardvark emerges from its burrow in the late afternoon or shortly after sunset, and forages over a considerable home range encompassing 10 to 30 km,[2] swinging its long nose from side to side to pick up the scent of food. When a concentration of ants or termites is detected, the aardvark digs into it with its powerful front legs, keeping its long ears upright to listen for predators, and takes up an astonishing number of insects with its long, sticky tongue—as many as 50,000 in one night have been recorded. It can dig 2 feet in 15 seconds,[8] but otherwise moves fairly slowly. Its claws enable it to dig through the extremely hard crust of a termite or ant mound quickly, avoiding the dust by sealing the nostrils. When successful, the aardvark's long (up to 30 centimetres (12 in))[2] tongue licks up the insects; the termites' biting, or the ants' stinging attacks are rendered futile by the tough skin. Its keen hearing warns it of predators: lions, leopards, hyenas, and pythons.[citation needed]

Aside from digging out ants and termites, the aardvark also excavates burrows in which to live; temporary sites are scattered around the home range as refuges, and a main burrow is used for breeding. Main burrows can be deep and extensive, have several entrances and can be as long as 13 metres (43 ft).[7] The aardvark changes the layout of its home burrow regularly, and from time to time moves on and makes a new one; the old burrows are then inhabited by smaller animals like the African wild dog.[2] Only mothers and young share burrows. If attacked in the tunnel, it will seal the tunnel off behind itself or turn around and attack with its claws.[citation needed]

Aardvarks only pair during the breeding season; after a gestation period of seven months, one cub weighing around 2 kilograms (4.4 lb) is born, and is able to leave the burrow to accompany its mother after only two weeks, and is eating termites at 14 weeks and is weaned by 16 weeks.[2][7] At six months of age it is able to dig its own burrows, but it will often remain with the mother until the next mating season, and is sexually capable by the season after that.[citation needed]

Aardvarks live for up to 24 years in captivity.[2]

The aardvark's main predators are lions, leopards, hunting dogs and pythons. Some African tribes also hunt aardvarks for meat.[citation needed] Aardvarks can dig fast or run in zigzag fashion to elude enemies, but if all else fails, they will strike with their claws, tail and shoulders, sometimes flipping onto their backs to lash with all fours. Their thick skin also protects them to some extent.[citation needed]

In African folklore, the aardvark is much admired because of its diligent quest for food and its fearless response to soldier ants. Hausa magicians make a charm from the heart, skin, forehead, and nails of the aardvark, which they then proceed to pound together with the root of a certain tree. Wrapped in a piece of skin and worn on the chest, the charm is said to give the owner the ability to pass through walls or roofs at night. The charm is said to be used by burglars and those seeking to visit young girls without their parents' permission.[9]

The Egyptian god Set is said, by some, to have the head of an aardvark,[10] or part aardvark.[11]

The main antagonist (Cyril Sneer)[12] and one of the protagonists (Cedric Sneer)[12] of the 1980s Gemini Award[13] winning animated television series The Raccoons were aardvarks.

The main character of Arthur, an animated television series for children produced by WGBH, shown in more than 180 countries, is an aardvark.[14]

One of the main characters of the 1969-1971 animated cartoon The Ant and the Aardvark is a blue aardvark voiced by John Byner, doing an impersonation of Jackie Mason. It depicts the Aardvark attempting, and failing, to catch and eat his antagonist, the Ant, also voiced by Byner impersonating Dean Martin.