This article is about vegetation and landscape. For other uses, see Grassland (disambiguation).
"Greensward" redirects here. For park plan, see Central Park. 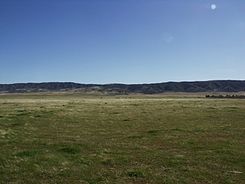 A grassland in the Antelope Valley, California 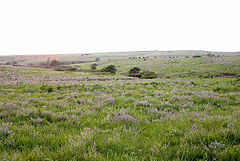 The Konza tallgrass prairie in the Flint Hills of northeastern Kansas 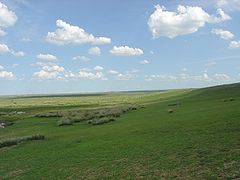 An Inner Mongolian grassland in the People's Republic of China

Grasslands are areas where the vegetation is dominated by grasses (Poaceae) and other herbaceous (non-woody) plants (forbs). However, sedge (Cyperaceae) and rush (Juncaceae) families can also be found. Grasslands occur naturally on all continents except Antarctica. In temperate latitudes, such as northwestern Europe and the Great Plains and California in North America, native grasslands are dominated by perennial bunch grass species, whereas in warmer climates annual species form a greater component of the vegetation.[1]

Grasslands are found in most ecoregion of the Earth. For example there are five terrestrial ecoregion classifications (subdivisions) of the temperate grasslands, savannas, and shrublands biome ('ecosystem'), which is one of eight terrestrial ecozones of the Earth's surface.

Grassland vegetation can vary in height from very short, as in chalk where the vegetation may be less than 30 cm (12 in) high, to quite tall, as in the case of North American tallgrass prairie, South American grasslands and African savanna.

Woody plants, shrubs or trees, may occur on some grasslands - forming savannas, scrubby grassland or semi-wooded grassland, such as the African savannas or the Iberian dehesa. Such grasslands are sometimes referred to as wood-pasture or woodland.[2]

As flowering plants, grasses grow in great concentrations in climates where annual rainfall ranges between 500 and 900 mm (20 and 35 in).[1] The root systems of perennial grasses and forbs form complex mats that hold the soil in place.

The appearance of mountains in the western United States during the Miocene and Pliocene epochs, a period of some 25 million years, created a continental climate favorable to the evolution of grasslands. Existing forest biomes declined, and grasslands became much more widespread. Following the Pleistocene Ice Ages, grasslands expanded in range in the hotter, drier climates, and began to become the dominant land feature worldwide.[2]

Natural grasslands primarily occur in regions that receive between 250 and 900 mm (9.8 and 35 in) of rain per year, as compared with deserts, which receive less than 250 mm (9.8 in) and tropical rainforests, which receive more than 2,000 mm (79 in).[2] Anthropogenic grasslands often occur in much higher rainfall zones, as high as 200 cm (79 in) annual rainfall. Grassland can exist naturally in areas with higher rainfall when other factors prevent the growth of forests, such as in serpentine barrens, where minerals in the soil inhibit most plants from growing.

Average daily temperatures range between -20 and 30 °C.[3] Temperate grasslands have warm summers and cold winters with rain or some snow.

Grasslands dominated by unsown wild-plant communities ("unimproved grasslands") can be called either natural or 'semi-natural' habitats. The majority of grasslands in temperate climates are 'semi-natural'. Although their plant communities are natural, their maintenance depends upon anthropogenic activities such as low-intensity farming, which maintains these grasslands through grazing and cutting regimes. These grasslands contain many species of wild plants - grasses, sedges, rushes and herbs - 25 or more speerican prairie grasslands or lowland wildflower meadows in the UK are now rare and their associated wild flora equally threatened. Associated with the wild-plant diversity of the "unimproved" grasslands is usually a rich invertebrate fauna; also there are many species of birds that are grassland "specialists", such as the snipe and the Great Bustard. Agriculturally improved grasslands, which dominate modern intensive agricultural landscapes, are usually poor in wild plant species due to the original diversity of plants having been destroyed by cultivation, the original wild-plant communities having been replaced by sown monocultures of cultivated varieties of grasses and clovers, such as Perennial ryegrass and White Clover. In many parts of the world "unimproved" grasslands are one of the least threatened habitats, and a target for acquisition by wildlife conservation groups or for special grants to landowners who are encouraged to manage them appropriately. 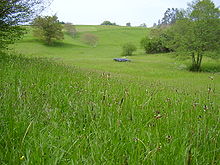 A restored grassland ecosystem at Morton Arboretum in Illinois.

Grasslands are of vital importance for raising livestock for human consumption and for milk and other dairy products.

Grassland vegetation remains dominant in a particular area usually due to grazing, cutting, or natural or manmade fires, all discouraging colonisation by and survival of tree and shrub seedlings. Some of the world's largest expanses of grassland are found in African savanna, and these are maintained by wild herbivores as well as by nomadic pastoralists and their cattle, sheep or goats.

Grasslands may occur naturally or as the result of human activity. Grasslands created and maintained by human activity are called anthropogenic grasslands. Hunting peoples around the world often set regular fires to maintain and extend grasslands, and prevent fire-intolerant trees and shrubs from taking hold. The tallgrass prairies in the American Midwest may have been extended eastward into Illinois, Indiana, and Ohio by human agency. Much grassland in northwest Europe developed after the Neolithic Period, when people gradually cleared the forest to create areas for raising their livestock.

Mid-latitude grasslands, including the Prairie and Pacific Grasslands of North America, the Pampas of Argentina, Brazil and Uruguay, calcareous downland, and the steppes of Europe. They are classified with temperate savannas and shrublands as the temperate grasslands, savannas, and shrublands biome. Temperate grasslands are the home to many large herbivores, such as bison, gazelles, zebras, rhinoceroses, and wild horses. Carnivores like lions, wolves and cheetahs and leopards are also found in temperate grasslands. Other animals of this region include: deer, prairie dogs, mice, jack rabbits, skunks, coyotes, snakes, fox, owls, badgers, blackbirds (both Old and New World varieties), grasshoppers, meadowlarks, sparrows, quails, hawks and hyenas. 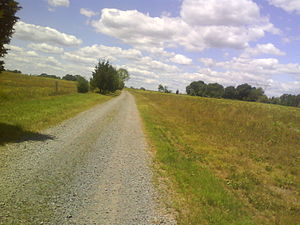 Grasslands that are flooded seasonally or year-round, like the Everglades of Florida, the Pantanal of Brazil, Bolivia and Paraguay or the Esteros del Ibera in Argentina.They are classified with flooded savannas as the flooded grasslands and savannas biome and occur mostly in the tropics and subtropics.

Watermeadows are grasslands that are deliberately flooded for short periods.

High-altitude grasslands located on high mountain ranges around the world, like the Páramo of the Andes Mountains. They are part of the montane grasslands and shrublands biome and also constitute tundra.

Similar to montane grasslands, polar arctic tundra can have grasses, but high soil moisture means that few tundras are grass-dominated today. However, during the Pleistocene ice ages, a polar grassland known as steppe-tundra occupied large areas of the Northern hemisphere. These are in the tundra biome.

Also called desert grasslands, this is composed of sparse grassland ecoregions located in the deserts and xeric shrublands biome.

Mites, insect larvae, nematodes and earthworms inhabit deep soil, which can reach 6 metres (20 ft) underground in undisturbed grasslands on the richest soils of the world. These invertebrates, along with symbiotic fungi, extend the root systems, break apart hard soil, enrich it with urea and other natural fertilizers, trap minerals and water and promote growth.[4] Some types of fungi make the plants more resistant to insect and microbial attacks.

Grassland in all its form supports a vast variety of mammals, reptiles, birds, and insects. Typical large mammals include the Blue Wildebeest, American Bison, Giant Anteater and Przewalski's Horse.

While grasslands in general support diverse wildlife, given the lack of hiding places for predators, the African savanna regions support a much greater diversity in wildlife than do temperate grasslands.[5]

There is evidence for grassland being much the product of animal behaviour and movement;[6] some examples include migratory herds of antelope trampling vegetation and African Bush Elephants eating Acacia saplings before the plant has a chance to grow into a mature tree.