Biologists that study plant morphology use a number of different terms to describe plant organs and parts that can be observed with the human eye using no more than a hand held magnifying lens. These terms are used to identify and classify plants.

Duration of individual plant lives are described using these terms:

Roots generally do not offer many characters used in plant identification and classification but are important in determining plant duration though in some groups they very important for proper identification including the grasses. 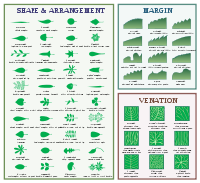 Leaf Parts: – A complete leaf is composed of a blade, petiole and stipules and in many plants one or more might be lacking or highly modified.

Fruits are the matured ovary of seed bearing plants and they include the contents of the ovary, which can be floral parts like the receptacle, involucre, calyx and others that are fused to it. Fruits are often used to identify plant taxa and help to place the species in the correct family or differentiate different groups with in the same family.

Scheme of a drupe.

Scheme of a pome.

Fruits are divided into different types depending on how they form, were or how they open and what parts they are composed of.