Pinnate is a term used to describe feather-like or multi-divided features arising from both sides of a common axis in plant or animal structures, and comes from the Latin word pinna meaning "feather", "wing", or "fin". A similar term is pectinate, which refers to a comb-like arrangement of parts (arising from one side of an axis). The term contrasts somewhat with palmate, in which the parts or structures radiate out from a common point. 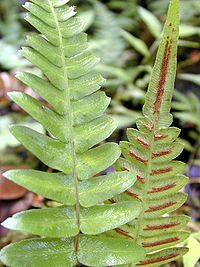 A pinnate frond of the fern, Blechnum appendiculatum.

Botanically, the term describes an arrangement of discrete structures (such as leaflets, veins, lobes, branches, or appendages) arising at multiple points along a common axis. For example, once-divided leaf blades having leaflets arranged on both sides of a rachis are pinnately compound leaves. Many palms (notably the feather palms) and most cycads and grevilleas have pinnately divided leaves. Most species of ferns have pinnate or more highly divided fronds, and in ferns the leaflets or segments are typically referred to as "pinnae" (singular "pinna"). Plants with pinnate leaves are sometimes colloquially called "feather-leaved".

pinnatifid and pinnatipartite: leaves with pinnate lobes that are not discrete, remaining sufficiently connected to each other that they are not separate leaflets.

pinnatisect: cut all the way to the midrib or other axis, but with the bases of the pinnae not contracted to form discrete leaflets.

pinnate-pinnatifid: pinnate, with the pinnae being pinnatifid.

paripinnate: pinnately-compound leaves in which leaflets are born in pairs along the rachis without a single terminal leaflet; also called "even-pinnate".

imparipinnate: pinnately-compound leaves in which there is a lone terminal leaflet rather than a terminal pair of leaflets; also called "odd-pinnate".

bipinnate: pinnately compound leaves in which the leaflets are themselves pinnately-compound; also called "twice-pinnate".

tripinnate: pinnately compound leaves in which the leaflets are themselves bipinnate; also called "thrice-pinnate".

tetrapinnate: pinnately compound leaves in which the leaflets are themselves tripinnate.

unipinnate: solitary compound leaf with a row of leaflets arranged along each side of a common rachis.

In animals, pinnate is used to describe feather-like structures:

The term is also used to describe certain waterway systems in which all major tributary streams enter the main channels by flowing in one direction at an oblique angle.