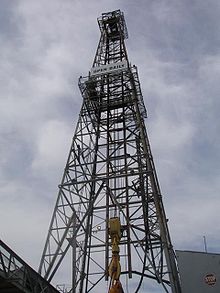 A derrick is a lifting device composed of one tower, or guyed mast such as a pole which is hinged freely at the bottom. It is controlled by lines (usually four of them) powered by some means such as man-hauling or motors, so that the pole can move in all four directions. A line runs up it and over its top with a hook on the end, like with a crane. It is commonly used in docks and onboard ships. Some large derricks are mounted on dedicated vessels, and are often known as "floating derricks".

The device was named for its resemblance to a type of gallows from which a hangman's noose hangs. The derrick type of gallows in turn got its name from Thomas Derrick, an English executioner from the Elizabethan era. 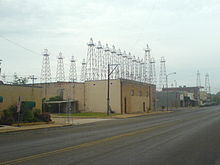 Another kind of derrick is used over oil wells and other drilled holes. This is generally called an oil derrick and is a complex set of machines specifically designed for optimum efficiency, safety and low cost. This is used on some offshore oil and gas rigs.

The centerpiece is the archetypical derrick tower, used for lifting and positioning the drilling string and piping above the well bore, and containing the machinery for turning the drilling bit around in the hole. As the drill string goes deeper into the underlying soil or rock, new piping has to be added to the top of the drill to keep the connection between drill bit and turning machinery intact, to create a filler to keep the hole from caving in, and to create a conduit for the drilling mud. The drilling mud is used to cool the drilling bit and to blow rock debris clear from the drill bit and the bottom of the well. The piping joints sections—usually each about 10 meters (30 ft) long—have threaded ends, so they can be screwed together. The piping is hollow to allow for the mud to be pumped down into the drilling hole, where it flushes out at the drilling bit. The mud then proceeds upwards towards the surface on the outside of the piping, carrying the debris with it.

The derrick also controls the weight on the drilling bit, because the drill bit works at an optimum rate only when it is pushed with a precise degree of pressure relative to the rock beneath it. Too much weight can break the drilling bit, and not enough weight will prolong drilling time. At the start of drilling extra heavy piping collars are used to create enough weight to drill. Since the weight of the pipes above the drill bit will increase the pressure on it as it goes deeper, the derrick will apply less pressure as piping sections are added. It will eventually lift the nearly entire drill string-and-piping complex to prevent too much weight as the well goes deeper.

The boom is connected with the lower part of the mast which is shaped like a “Y” or a bipod and therefore it is a single swinging derrick. On the cross trees, two guys are fastened using swivel outriggers which are stayed vertically and horizontally. In order to maintain a good controlling angle between guys and derrick, the outriggers cannot pass the inboard parallel of the centerline. Looking at the illustration, one can easily see that the right outrigger stays in the centerline and the left outrigger has moved outboard. This derrick will lower or heave cargo as both guys are veered or hauled. Three winches, controlled by joystick, are necessary to operate the Hallen Derrick; two for the guys and one for the purchase. To avoid an over-topping or over-swinging limit-switches are used. However, the limits can be modified if a different working range or a special vertical stowage is required. The safe working load (SWL) of the Hallen is between 10 and 80 tonnes. In a Hallen Universal derrick, which has no Hallen D-Frame, the halyard has an extended length since it runs through further blocks on the centerline. The Universal Hallen derrick, replacing the D-frame option, is a kind of traditional topping lift. The Hallen D-Frame is a steel bracket welded on the mast in the centerline. For an observer standing a beam, the frame has a “D”-shape. The D-Frame supersedes the outriggers and provides a good controlling angle on the guys. The Hallen derrick has a good purpose for e.g. containers, logs, steel rail, sawn timber and heavy lifts and doesn't lend itself for small, general cargo. It keeps the deck clear of guy ropes and preventors. Only one winchman is needed and within a few minutes the Hallen is brought into use. It is less expensive than a crane. A disadvantage is the low working range of the Hallen Derrick, it is able to swing 75° from the centerline and can work against a list of up to 15°.

The Velle derrick is quite similar to the Hallen but without use of outriggers. On top of the boom is a T-shaped yoke assembled. Also here, the guys serve for topping and lowering the boom but they are fastened on the yoke with four short, steel-wire hanger-ropes. The ends of the topping and lowering ends of the halyard are secured to half-barrels on one winch. In this way the boom moves in the same speed as the winch veers the topping end of the halyard and hauls the lowering end of the halyard, and vice versa. The slewing ends are also wound on to another half-barrel. For hoisting the cargo, there is a third winch to hoist to cargo on the yoke. Runners decrease swing and rotation of the cargo. A joystick duplex controller steers the Velle derrick. 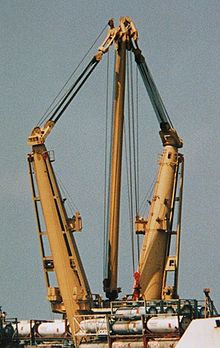 The patent Stülcken derrick is used for very heavy cargo. It stems from the German shipyard HC Stülcken & Sohn which has been taken over later by neighboring yard Blohm & Voss. This derrick can handle up to 300 tonnes. The Stülcken can be made ready in few minutes, which is a lot faster than a traditional heavy derrick, doesn't require lots of space and is operated by four winches. Between two v-shaped, unstayed Samson-posts is the Stülcken secured. This makes it possible to let the derrick swing through the posts to reach another hatch. For each post is a hoisting winch, a span winch and a lever that is run by one man only. Bearings, swivels, sheaves and the gooseneck can be unattended for up to four years and create only a friction of about 2%. The span tackles are independent and the halyard is endless. With the revolving suspension heads on the posts it takes ten minutes to swing all the way through. In the double-pendulum block type, half of the cargo tackle can be anchored to the base of the boom. In order to double the hook speed, the halyard passes through the purchases since one end is secured which reduces the SWL to its half. Typical dimensions of a 275 tonne Stülcken are: 25.5 m length, 0.97 m diameter, 1.5 m to 3.4 m diameter of posts, 18 m apart the posts (upper end) and 8.4 m apart the posts (lower end). The hook of a full-loaded 275 tonne Stülcken can move 2.3 m per minute. If only one purchase is secured and the derrick is loaded with 137 tonnes the hook gains velocity to 4.6 m per min. Even more speed can be gained when the winch ratios are reduced to 100 tonnes (triple speed) and 68 tonnes (quadruple speed). Detaching the union table the double-pendulum block type of Stülcken is able to swing through which allows the lower blocks to swing freely to each side of the boom. In this way the derrick reaches a vertical position. A bullrope easily pulls the derrick to the other side until the weight of the cargo tips the derrick over. The span tackles now have the weight on the other side. The union table is fixed again and the derrick can start its work on the other side. There are also Stülcken with single-pendulum blocks. At this type the cargo hook is detached and the lower and upper cargo block are hauled into the center of the Stülcken. To tip the derrick over the gravity is here used again. A derrick helps pump oil in most offshore rigs. 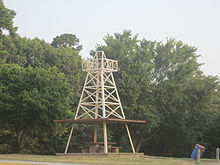 Replica of an oil derrick atop picnic tables at a roadside stop along Interstate 20 west of Tyler, Texas