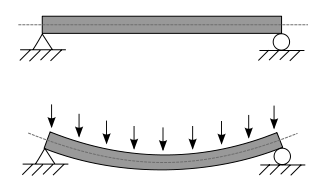 A beam is a horizontal structural element that is capable of withstanding load primarily by resisting bending. The bending force induced into the material of the beam as a result of the external loads, own weight, span and external reactions to these loads is called a bending moment.

Beams generally carry vertical gravitational forces but can also be used to carry horizontal loads (i.e., loads due to an earthquake or wind). The loads carried by a beam are transferred to columns, walls, or girders, which then transfer the force to adjacent structural compression members. In light frame construction the joists rest on the beam.

Beams are characterized by their profile (the shape of their cross-section), their length, and their material. In contemporary construction, beams are typically made of steel, reinforced concrete, or wood. One of the most common types of steel beam is the I-beam or wide-flange beam (also known as a "universal beam" or, for stouter sections, a "universal column"). This is commonly used in steel-frame buildings and bridges. Other common beam profiles are the C-channel, the hollow structural section beam, the pipe, and the angle.

Beams are also described by how they are supported. Supports restrict lateral and/or rotational movements so as to satisfy stability conditions as well as to limit the deformations to a certain allowance. A simple beam is supported by a pin support at one end and a roller support at the other end. A beam with a laterally and rotationally fixed support at one end with no support at the other end is called a cantilever beam. A beam simply supported at two points and having one end or both ends extended beyond the supports is called an overhanging beam.

The moment of inertia of an object about a given axis describes how difficult it is to change its angular motion about that axis. Therefore, it encompasses not just how much mass the object has overall, but how far each bit of mass is from the axis. The farther out the object's mass is, the more rotational inertia the object has, and the more force is required to change its rotation rate. 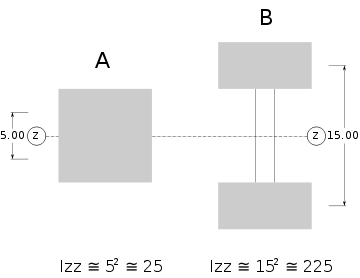 Internally, beams experience compressive, tensile and shear stresses as a result of the loads applied to them. Typically, under gravity loads, the original length of the beam is slightly reduced to enclose a smaller radius arc at the top of the beam, resulting in compression, while the same original beam length at the bottom of the beam is slightly stretched to enclose a larger radius arc, and so is under tension. The same original length of the middle of the beam, generally halfway between the top and bottom, is the same as the radial arc of bending, and so it is under neither compression nor tension, and defines the neutral axis (dotted line in the beam figure). Above the supports, the beam is exposed to shear stress. There are some reinforced concrete beams in which the concrete is entirely in compression with tensile forces taken by steel tendons. These beams are known as prestressed concrete beams, and are fabricated to produce a compression more than the expected tension under loading conditions. High strength steel tendons are stretched while the beam is cast over them. Then, when the concrete has cured, the tendons are slowly released and the beam is immediately under eccentric axial loads. This eccentric loading creates an internal moment, and, in turn, increases the moment carrying capacity of the beam. They are commonly used on highway bridges.

The primary tool for structural analysis of beams is the Euler–Bernoulli beam equation. Other mathematical methods for determining the deflection of beams include "method of virtual work" and the "slope deflection method". Engineers are interested in determining deflections because the beam may be in direct contact with a brittle material such as glass. Beam deflections are also minimized for aesthetic reasons. A visibly sagging beam, even if structurally safe, is unsightly and to be avoided. A stiffer beam (high modulus of elasticity and high second moment of area) produces less deflection.

Mathematical methods for determining the beam forces (internal forces of the beam and the forces that are imposed on the beam support) include the "moment distribution method", the force or flexibility method and the direct stiffness method.

Most beams in reinforced concrete buildings have rectangular cross sections, but the most efficient cross section for a simply supported beam is an I or H section. Because of the parallel axis theorem and the fact that most of the material is away from the neutral axis, the second moment of area of the beam increases, which in turn increases the stiffness.

Efficiency means that for the same cross sectional area (volume of beam per length) subjected to the same loading conditions, the beam deflects less.

Other shapes, like L (angles), C (channels) or tubes, are also used in construction when there are special requirements.