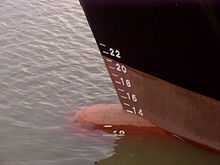 As weight is added to a ship, it submerges. Designated displacement is the ship's weight when fully loaded and submerged to her load lines.

A ship's displacement is its weight[1] at any given time, generally expressed in metric tons or long tons. The term is often used to mean the ship's weight when it is loaded to its maximum capacity. A number of synonymous terms exist for this maximum weight, such as loaded displacement, full load displacement and designated displacement.[2] Displacement is a measurement of weight, and should not be confused with similarly named measurements of volume or capacity such as net tonnage, gross tonnage, or deadweight tonnage.

The density (weight per unit of volume) of water can vary. For example, the average density of seawater at the surface of the ocean is 1025 kg/m³ (10.25 lb/ga, 8.55 lb/US gallon), fresh water on the other hand has a density of about 1000 kg/m³ (10.00 lb/ga, 8.35 lb/US gallon).[2] Consider a 100-ton ship passing from a saltwater sea into a freshwater river. It always displaces exactly 100 tons of water, but it has to displace a greater volume of fresh water to amount to 100 tons. Therefore it would sit slightly lower in the water in the freshwater river than it would in the saltwater sea.

It can be useful to know a ship's displacement when it is unloaded or partially loaded. Terms for these measurements include light displacement, standard displacement, and normal displacement. These terms are defined fully below.

The traditional method for determining a ship's actual displacement is by use of draft marks.[4] A merchant vessel has six sets of draft marks: forward, midships, and astern on both the port and starboard sides.[4] These drafts can allow the determination of a ship's displacement to an accuracy of 0.5%.[4] First, the individual drafts are averaged to find a mean draft.[5] Then the mean draft is entered into the ship's hydrostatic tables, giving a displacement.[6]

Computers have been used to assist in hydrostatic calculations, such as determining displacement, since the 1950s.[7] The first were mechanical computers, similar to slide rules which could convert cargo levels to values such as deadweight tonnage, draft, and trim.[7] Since the 1970s, personal computer-based programs have been developing to meet these needs.[7]

Loaded displacement is defined as the weight of the ship including cargo, passengers, fuel, water, stores, dunnage and such other items necessary for use on a voyage, which brings the ship down to her load draft.[9]

The standard displacement, also known as Washington disp, is a term defined in the Washington Naval Treaty.[10] It is defined as the displacement of the ship complete, fully manned, engined, and equipped ready for sea, including all armament and ammunition, equipment, outfit, provisions and fresh water for crew, miscellaneous stores, and implements of every description that are intended to be carried in war, but without fuel or reserve boiler feed water on board.[10] The omission of fuel and water was to avoid penalizing the British who had greater global reach and required higher fuel loads.

Light displacement is defined as the weight of the ship excluding cargo, fuel, ballast, stores, passengers, crew, but with water in boilers to steaming level.[9]

This rare term has been used to mean the ship's displacement "with all outfit, and two-thirds supply of stores, ammunition, etc., on board."[11]