The gallon is a measure of volume. Historically it has had many different definitions, but there are three definitions in current use. There is the imperial gallon (≈ 4.546 l) which is used in the United Kingdom[1] and is in semi-official use within Canada.[2] In United States customary units there are the liquid (≈ 3.79 l) and the lesser used dry gallons (≈ 4.40 l). The gallon, be it the imperial or US gallon, is sometimes found in other English-speaking[citation needed] countries. 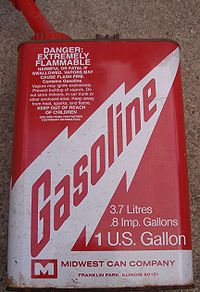 A one US gallon gas can purchased near the US–Canada border. It shows equivalences in imperial gallons and litres.

The imperial gallon is used colloquially (and in advertising) in Canada, and used in the United Kingdom for fuel economy figures (i.e. miles per gallon)—elsewhere in Europe, the effective fuel consumption is advertised in litres per 100 km. The Imperial gallon also continues to be used as a unit of measure for fuel in Antigua and Barbuda,[5] Belize,[6][7] Burma (Myanmar),[8][9][10] Cayman Islands, Grenada,[11][12] and Guyana. The United Arab Emirates switched from imperial gallons to litres on 1 January 2010[13]. Sierra Leone switched to selling fuel by the litre in May 2011.[14]. Antigua and Barbuda will convert to litres before 2015[15].

Relationship to other units

The gallon originated as the base of systems for measuring wine, and ale and beer in England. The sizes of gallon used in these two systems were different from each other: the first was based on the wine gallon (equal in size to the US gallon), and the second on either the ale gallon or the smaller imperial gallon. The only vestige of this system still operating in the United Kingdom is that draught beer and cider must still be sold in thirds of UK pints, halves of UK pints, or full UK pints (and multiples thereof). Wine in the United Kingdom has been sold in metric quantities since the early 1990s.

By the end of the 18th century, three definitions of the gallon were in common use:[citation needed]

The wine, fluid, or liquid gallon has been the standard US gallon since the early 19th century. The wine gallon, which some sources relate to the volume occupied by eight medieval merchant pounds of wine, was at one time defined as the volume of a cylinder six inches deep and seven inches in diameter, i.e. 6 × (3 1⁄2)2 × π ≈ 230.907 06 cubic inches. It had been redefined during the reign of Queen Anne, in 1706, as 231 cubic inches exactly (3 × 7 × 11 in), which is the result of the earlier definition with π approximated to 22⁄7. Although the wine gallon had been used for centuries for import duty purposes there was no legal standard of it in the Exchequer and a smaller gallon (224 cu in) was actually in use, so this statute became necessary. It remains the US definition today.

In 1824, Britain adopted a close approximation to the ale gallon known as the imperial gallon and abolished all other gallons in favour of it. Inspired by the kilogram-litre relationship, the imperial gallon was based on the volume of 10 pounds of distilled water weighed in air with brass weights with the barometer standing at 30 inches of mercury and at a temperature of 62 °F. In 1963, this definition was refined as the space occupied by 10 pounds of distilled water of density 0.998859 g/mL weighed in air of density 0.001217 g/mL against weights of density 8.136 g/mL. This works out at approximately 4.5460903 L (277.4416 cu in). The metric definition of exactly 4.54609 cubic decimetres (also 4.54609 L after the litre was redefined in 1964, ≈ 277.419433 cu in) was adopted shortly afterwards in Canada; for several years, the conventional value of 4.546092 L was used in the United Kingdom, until the Canadian convention was adopted in 1985.