6 inch (15 cm) outside diameter, oil-cooled cables, traversing the Grand Coulee Dam throughout. An example of a heavy cable for power transmission. 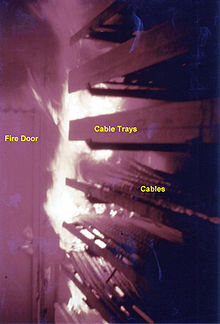 A cable is two or more wires running side by side and bonded, twisted or braided together to form a single assembly. In mechanics cables, otherwise known as wire ropes, are used for lifting, hauling and towing or conveying force through tension. In electrical engineering cables are used to carry electric currents. An optical cable contains one or more optical fibers in a protective jacket that supports the fibers.

Ropes made of multiple strands of natural fibers such as hemp, sisal, manila, and cotton have been used for millennia for hoisting and hauling. By the 19th century, deepening of mines and construction of large ships increased demand for stronger cables. Invention of improved steelmaking techniques made high quality steel available at lower cost, and so wire ropes became common in mining and other industrial applications. By the middle of the 19th century, manufacture of large submarine telegraph cables was done using machines similar to those used for manufacture of mechanical cables.

Electrical cables may be made more flexible by stranding the wires. In this process, smaller individual wires are twisted or braided together to produce larger wires that are more flexible than solid wires of similar size. Bunching small wires before concentric stranding adds the most flexibility. Copper wires in a cable may be bare, or they may be plated with a thin layer of another metal, most often tin but sometimes gold, silver or some other material. Tin, gold, and silver are much less prone to oxidation than copper, which may lengthen wire life, and makes soldering easier. Tinning is also used to provide lubrication between strands. Tinning was used to help removal of rubber insulation. Tight lays during stranding makes the cable extensible (CBA - as in telephone handset cords).

Cables can be securely fastened and organized, such as by using trunking, cable trays, cable ties or cable lacing. Continuous-flex or flexible cables used in moving applications within cable carriers can be secured using strain relief devices or cable ties.

At high frequencies, current tends to run along the surface of the conductor. This is known as the skin effect. 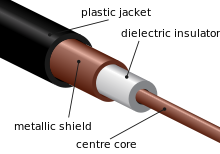 Any current-carrying conductor, including a cable, radiates an electromagnetic field. Likewise, any conductor or cable will pick up energy from any existing electromagnetic field around it. These effects are often undesirable, in the first case amounting to unwanted transmission of energy which may adversely affect nearby equipment or other parts of the same piece of equipment; and in the second case, unwanted pickup of noise which may mask the desired signal being carried by the cable, or, if the cable is carrying power supply or control voltages, pollute them to such an extent as to cause equipment malfunction.

The first solution to these problems is to keep cable lengths in buildings short, since pick up and transmission are essentially proportional to the length of the cable. The second solution is to route cables away from trouble. Beyond this, there are particular cable designs that minimize electromagnetic pickup and transmission. Three of the principal design techniques are shielding, coaxial geometry, and twisted-pair geometry.

Shielding makes use of the electrical principle of the Faraday cage. The cable is encased for its entire length in foil or wire mesh. All wires running inside this shielding layer will be to a large extent decoupled from external electric fields, particularly if the shield is connected to a point of constant voltage, such as earth. Simple shielding of this type is not greatly effective against low-frequency magnetic fields, however - such as magnetic "hum" from a nearby power transformer. A grounded shield on cables operating at 2.5 kV or more gathers leakage current and capacitive current, protecting people from electric shock and equalizing stress on the cable insulation.

Coaxial design helps to further reduce low-frequency magnetic transmission and pickup. In this design the foil or mesh shield is perfectly tubular - i.e. with a circular cross section - and the inner conductor (there can only be one) is situated exactly at its center. This causes the voltages induced by a magnetic field between the shield and the core conductor to consist of two nearly equal magnitudes which cancel each other.

The twisted pair is a simple expedient where two wires of a cable, rather than running parallel to each other, are twisted around each other, forming a pair of intertwined helices. This can be achieved by putting one end of the pair in a hand drill and turning while maintaining moderate tension on the line.

In building construction, electrical cable jacket material is a potential source of fuel for fires. To limit the spread of fire along cable jacketing, one may use cable coating materials or one may use cables with jacketing that is inherently fire retardant. The plastic covering on some metal clad cables may be stripped off at installation to reduce the fuel source for accidental fires. In Europe in particular, it is often customary to place inorganic wraps and boxes around cables in order to safeguard the adjacent areas from the potential fire threat associated with unprotected cable jacketing. However, this fire protection also traps heat generated from conductor losses, so the protection must be thin.

There are two methods of providing fire protection to a cable:

Basic cable types are as follows:

Based on construction and cable properties, they can be sorted into the following: 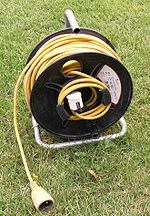