Admiralty Courts in England and Wales 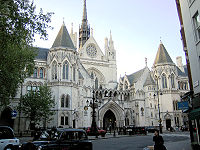 Royal Courts of Justice, The Strand

Today Admiralty jurisdiction is exercised by the High Court of England and Wales. The admiralty laws which are applied in this court is based upon the civil law-based Law of the Sea, as well as statutory and common law additions.

The jurisdiction of the High Court with respect to admiralty concern salvage and other legal issues.

Role in the American Revolution

During the period after the French and Indian War, Admiralty Courts became an issue that was a part of the rising tension between the British Parliament and their American Colonies. Starting with the Proclamation of 1763, these courts were given jurisdiction over a number of laws affecting the colonies. The jurisdiction was expanded in later acts of the Parliament, such as the Stamp Act of 1765.

The colonists' objections were based on several factors. The courts could try a case anywhere in the British Empire. Cases involving New York or Boston merchants were frequently heard in Nova Scotia and sometimes even in England. The fact that judges were paid based in part on the fines that they levied and naval officers were paid for bringing 'successful' cases led to abuses. There was no trial by jury, and evidence standards were weaker than in criminal courts. The government's objective was to improve the effectiveness of revenue and excise tax laws. In many past instances, smugglers would avoid taxes. Even when they were caught and brought to trial, local judges frequently acquitted the popular local merchants whom they perceived as being unfairly accused by an unpopular tax collector. Cases were decided by judges rather than juries.

Maritime jurisdiction in the United States

In the United States, the federal district courts have jurisdiction over all admiralty and maritime actions; see 28 U.S.C. § 1333.

In recent years, a conspiracy argument used by tax protesters is that an American court displaying an American flag with a gold fringe is in fact an "admiralty court" and thus has no jurisdiction. Courts have repeatedly dismissed this as frivolous.[2] [This reference is a criminal case with no reference to the IRS.]

Vice admiralty courts were juryless courts located in British colonies that were granted jurisdiction over local legal matters related to maritime activities, such as disputes between merchants and seamen. Judges were given 5% of confiscated cargo, if they found a smuggling defendant guilty. This gave judges financial incentive to find defendants guilty.

A vice admiralty court was formed in Nova Scotia to try smugglers and to enforce the Sugar Act of 1764 throughout British North America. From 1763–1765, when American smugglers were caught, they were tried by corrupt judges who received a percentage of the confiscated goods if the defendants were found guilty; therefore, defendants were more than likely to be found guilty.