The auditory system is the for the sense of hearing.

The folds of cartilage surrounding the ear canal are called the pinna. Sound waves are reflected and attenuated when they hit the pinna, and these changes provide additional information that will help the brain determine the direction from which the sounds came.

The sound waves enter the , a deceptively simple tube. The ear canal amplifies sounds that are between 3 and 12 . At the far end of the ear canal is the (or tympanic membrane), which marks the beginning of the .

Sound waves traveling through the ear canal will hit the tympanum, or . This wave information travels across the air-filled middle ear cavity via a series of delicate bones: the (hammer), (anvil) and (stirrup). These act as a lever and a teletype, converting the lower-pressure eardrum sound vibrations into higher-pressure sound vibrations at another, smaller membrane called the oval (or elliptical) window. Higher pressure is necessary because the inner ear beyond the oval window contains liquid rather than air. The sound is not amplified uniformly across the ossicular chain. The of the middle ear muscles helps protect the inner ear from damage. The middle ear still contains the sound information in wave form; it is converted to nerve impulses in the cochlea. 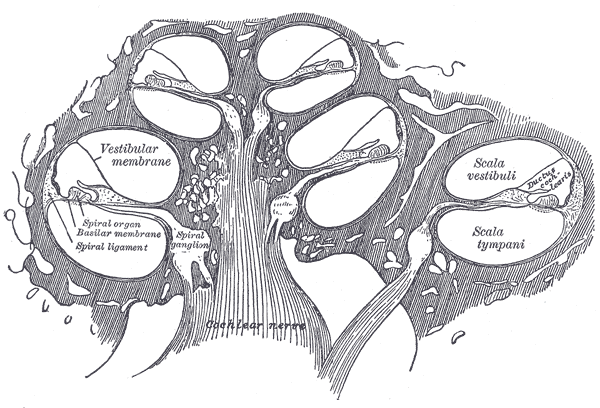 Caption = Diagrammatic longitudinal section of the cochlea. is labeled as "ductus cochlearis" at right.
Width = 350px
The inner ear consists of the and several non-auditory structures. The cochlea has three fluid-filled sections, and supports a fluid wave driven by pressure across the separating two of the sections. Strikingly, one section, called the cochlear duct or , contains an extracellular fluid similar in composition to , which is usually found inside of cells. The organ of Corti is located at this duct, and transforms mechanical waves to electric signals in neurons.

The organ of Corti forms a ribbon of sensory epithelium which runs lengthwise down the entire cochlea. The hair cells of the organ of Corti transform the fluid waves into nerve signals. The journey of a billion nerves begins with this first step; from here further processing leads to a panoply of auditory reactions and sensations.

Hair cells are columnar cells, each with a bundle of 100-200 specialized at the top, for which they are named. These cilia are the mechanosensors for hearing. Lightly resting atop the longest cilia is the tectorial membrane, which moves back and forth with each cycle of sound, tilting the cilia and allowing electric current into the hair cell.

Hair cells, like the photoreceptors of the eye, show a graded response, instead of the spikes typical of other neurons. These graded potentials are not bound by the “all or none” properties of an action potential.

At this point, one may ask how such a wiggle of a hair bundle triggers a difference in membrane potential. The current model is that cilia are attached to one another by “tip links”, structures which link the tips of one cilium to another. Stretching and compressing the tip links may open an ion channel and produce the receptor potential in the hair cell. Recently it has been shown that cdh23 and pchh15 are the adhesion molecules associated with these tip links. It is thought that a calcium driven motor causes a shortening of these links to regenerate tensions. This regeneration of tension allows for apprehension of prolonged auditory stimulation.

Afferent neurons innervate cochlear inner hair cells, at synapses where the neurotransmitter communicates signals from the hair cells to the dendrites of the primary auditory neurons.

There are far fewer inner hair cells in the cochlea than afferent nerve fibers. The neural dendrites belong to neurons of the , which in turn joins the to form the , or cranial nerve number VIII. [ [http://www.meddean.luc.edu/lumen/meded/GrossAnatomy/h_n/cn/cn1/cn8.htm Meddean - CN VIII. Vestibulocochlear Nerve] ]

Efferent projections from the brain to the cochlea also play a role in the perception of sound. Efferent synapses occur on outer hair cells and on afferent (towards the brain) dendrites under inner hair cells.

This sound information, now re-encoded, travels down the , through intermediate stations such as the and of the and the of the , being further processed at each waypoint. The information eventually reaches the , and from there it is relayed to the cortex. In the , the is located in the .

The is the first site of the neuronal processing of the newly converted “digital” data from the inner ear. This region is anatomically and physiologically split into two regions, the (DCN), and (VCN).

The is a bundle of decussating fibers in the ventral pons that carry information used for binaural computations in the brainstem.

The is located in the , and receives projections predominantly from the ventral cochlear nucleus, although the posterior cochlear nucleus projects there as well, via the ventral acoustic stria. Within the lies the lateral superior olive (LSO) and the medial superior olive (MSO). The former is important in detecting interaural level differences while the latter is important in distinguishing interaural time difference.

The lateral lemniscus is a tract of s in the that carries information about sound from the to various brainstem nuclei and ultimately the contralateral of the .

The IC are located just below the visual processing centers known as the superior colliculi. The central nucleus of the IC is a nearly obligatory relay in the ascending auditory system, and most likely acts to integrate information (specifically regarding sound source localization from the and ) before sending it to the thalamus and cortex.

The is part of the thalamic relay system.

is the first region of to receive auditory input.

Perception of sound is associated with the right posterior (STG). The superior temporal gyrus contains several important structures of the brain, including 41 and 42, marking the location of the , the cortical region responsible for the sensation of basic characteristics of sound such as pitch and rhythm.

The auditory association area is located within the of the brain, in an area called the , or area 22. This area, near the , is an important region for the processing of acoustic signals so that they can be distinguished as speech, music, or noise.