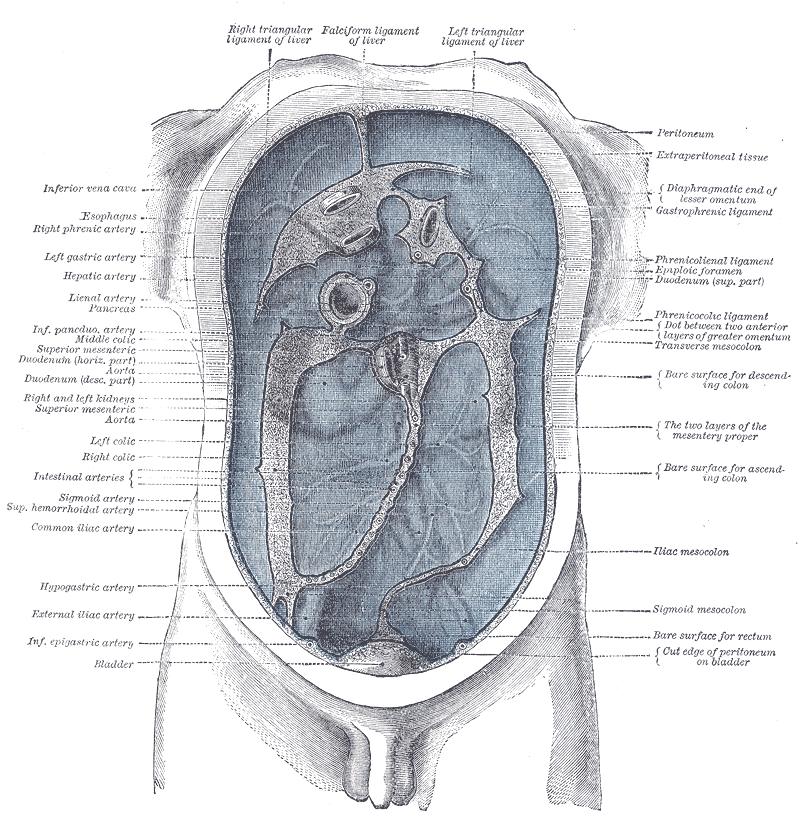 Caption = The peritoneum, coloured in blue

Caption2 = The , or general cavity (red) and , or omental bursa (blue). (Areas outlined in blue and red correspond to above diagram.)
System =
MeshName = Peritoneum
MeshNumber = A01.047.025.600
DorlandsPre = p_14
DorlandsSuf = 12629236
In higher s, the peritoneum is the that forms the lining of the abdominal cavity &mdash; it covers most of the intra-abdominal organs. It is composed of a layer of supported by a thin layer of .The peritoneum both supports the abdominal organs and serves as a for their and vessels and .

Although they ultimately form one continuous sheet, two types or layers of peritoneum and a potential space between them are referenced:
* The outer layer, called the parietal peritoneum, is attached to the .
* The inner layer, the visceral peritoneum, is wrapped around the internal organs that are located inside the intraperitoneal cavity.
* The potential space between these two layers is the ; it is filled with a small amount (about 50 ml) of slippery that allows the two layers to slide freely over each other.
* The term is often used to refer to a double layer of visceral peritoneum. There are often blood vessels, nerves, and other structures between these layers. It should be noted that the space between these two layers is technically outside of the peritoneal sac, and thus not in the peritoneal cavity.

There are two main regions of the peritoneum, connected by the :

* the (or "general cavity of the abdomen"), represented in red in the diagrams above.
* the (or "omental bursa"), represented in blue. The lesser sac is divided into two "omenta":
** The (or "gastrohepatic") is attached to the and the .
** The (or "gastrocolic") hangs from the and loops down in front of the before curving back upwards to attach to the transverse colon. In effect it is draped in front of the intestines like an apron and may serve as an insulating or protective layer.

The is the part of the peritoneum through which most abdominal organs are attached to the and supplied with and vessels and nerves.

"Peritoneum" is derived from Greek. "Peri-" means "around", while "-ton-" refers to stretching. Thus, peritoneuum means "stretched around" or "stretched over".

*
* [http://arbl.cvmbs.colostate.edu/hbooks/pathphys/misc_topics/peritoneum.html Overview and diagrams at colostate.edu]