The United Nations list of Non-Self-Governing Territories is a list of countries that, according to the United Nations, are non-decolonized. The list was initially prepared in 1946 pursuant to Chapter XI of the United Nations Charter, and has been updated by the General Assembly on recommendation of the Special Committee on Decolonization and its predecessors. Only permanently inhabited territories are considered for inclusion in this list, excluding many remote atolls (e.g., Clipperton Island and Kingman Reef) and Southern Ocean territories (e.g., French Southern and Antarctic Lands and Heard Island and McDonald Islands). The list currently contains 16 entries.[1]

The United Nations Charter contains a Declaration Concerning Non-Self-Governing Territories.[2] In Article 73e of the Charter, member States agree to report to the United Nations annually on the development of non-self-governing territories under their control. The initial List of Non-Self-Governing Territories was created by compiling lists of dependent territories submitted by the administering States themselves. In several instances, administering States were allowed to remove dependent territories from the list, either unilaterally (as in the case of many French overseas departments and territories), or by vote of the General Assembly (as in the cases of Puerto Rico, Greenland, the Netherlands Antilles, and Suriname).

The list draws its origins from the period of colonialism and the Charter's concept of non-self-governing territories. As an increasing number of formerly colonized countries became UN members, the General Assembly increasingly asserted its authority to place additional territories on the List and repeatedly declared that only the General Assembly had the authority to authorize a territory's being removed from the list upon attainment of any status other than full independence. For example, when Portugal joined the United Nations, it contended that it controlled no non-self-governing territories (because areas such as Angola and Mozambique were purported to be an integral part of the Portuguese state), but the General Assembly rejected this position. Similarly, Western Sahara was added in 1963 when it was a Spanish colony. The same can be said about the situation of Namibia (removed upon its independence in 1990), which was seen, due to its former status as a mandate territory, as a vestige of German colonial legacy in Africa. A set of criteria for determining whether a territory is to be considered "non-self-governing" was established in General Assembly Resolution 1541 (XV) of 1960. 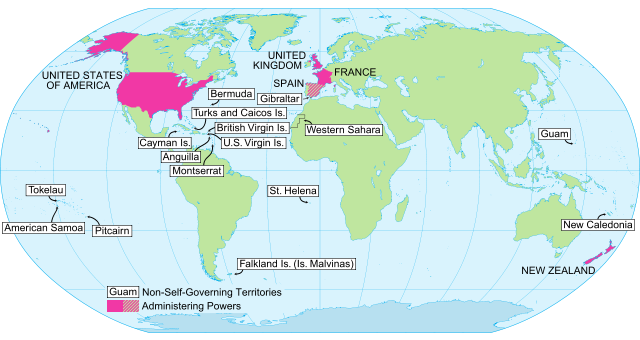 Choosing to remain a territory

One reason for the remaining controversy is the fact that the list includes many dependencies that have democratically chosen to maintain their territorial status, and rejected independence (or in some cases the territory periodically organizes referenda, as in the United States Virgin Islands, but there is insufficient voter participation). Other non-self-determining areas are excluded.

Another example is Tokelau. In response to attempts at decolonizing Tokelau, New Zealand journalist Michael Field wrote in 2004: "The UN [...] is anxious to rid the world of the last remaining vestiges of colonialism by the end of the decade. It has a list of 16 territories around the world, virtually none of which wants to be independent to any degree".[3] Tokelau is seen by some as a case in point. Field further notes that Patuki Isaako, who was head of Tokelau's government at the time of a UN seminar on decolonization in 2004, informed the United Nations that his country had no wish to be decolonized, and that Tokelauans had opposed the idea of decolonization ever since the first visit by UN officials in 1976. In 2006, a UN-supervised referendum on decolonization was held in Tokelau, where voters rejected the offer of self-government. When the first referendum failed, a second was held in 2007, and Tokelauans rejected it again. This led New Zealand politician and former diplomat John Hayes, on behalf of the National Party, to state that "Tokelau did the right thing to resist pressure from [the New Zealand government] and the United Nations to pursue self-government".[4] The United Nations most likely supported there being a referendum because clear majorities of Tokelauans support self-government in association with New Zealand. This was reinforced by the results of the referendum, which show that over 60% (60.07% in the first referendum, and 64.40% in the second) voted for self-government. However, the terms of the referendum required a two-thirds majority to vote in favor of self-government. On the second occasion, the proposition failed by just 16 votes. In May 2008, the United Nations' Secretary General Ban Ki-moon urged colonial powers "to complete the decolonization process in every one of the remaining 16 Non-Self-Governing Territories".[5] This led the New Zealand Herald to comment that the United Nations was "apparently frustrated by two failed attempts to get Tokelau to vote for independence from New Zealand".[6]

Gibraltar is another prime example of resident desires to remain with the status quo. Gibraltar, a largely self-governing British territory on the tip of the Iberian Peninsula whose territory is claimed by Spain, has twice held referenda to resolve their status. In the first referendum, held in 1967, the choices in the ballot were either to retain their current status or to become part of Spain. The status quo was favoured by 12,138 votes to 44. In the second referendum, held in 2002, a proposal for a joint Anglo-Spanish administration of the territory was proposed, and was voted down by 17,900 votes to 187 - the "no" vote accounting for more than 85% of Gibraltar's entire voting population.[7]

Population (or lack thereof) is also an issue regarding at least one territory included on the list: the British colony Pitcairn Islands, with a total population of 48 (many of whom are related), has simply too small a population base (and habitable landmass for expansion), to be realistically viable as an independent state.

Another criticism is that a number of the listed territories, such as Bermuda, consider themselves completely autonomous and self-governing, with the "administering power" retaining limited oversight over matters such as defence and diplomacy.[citation needed] In past years, there were ongoing disputes between some administering powers and the Decolonization Committee over whether territories such as pre-independence Brunei and the West Indies Associated States should still be considered "non-self-governing," particularly in instances where the administering country was prepared to grant full independence whenever the territory requested it. These disputes became redundant as those territories eventually received full independence.

Removed under other circumstances

Territories that have achieved a status described by the administering countries ("the colonizing power") as internally self-governing — such as Puerto Rico, the Netherlands Antilles, and the Cook Islands — have been removed from the list by vote of the General Assembly, often under pressure of the colonizing power or similar circumstances. In 1972, for example, Hong Kong (then administered by the United Kingdom) and Macau (then administered by Portugal) were removed from the list at the request of the People's Republic of China, which had just been recognized as holding China's seat at the United Nations.

Some territories that have been annexed and incorporated into the legal framework of the controlling state (such as the overseas departments of France) are considered by the UN to have been decolonized, since they then no longer constitute "non-self-governing" entities; their populations are assumed to have agreed to merge with the former parent state. However, in 1961, the General Assembly voted to end this treatment for the then-"overseas provinces" of Portugal such as Angola and Mozambique, which were active foci of United Nations attention until they attained independence in the mid-1970s.

On December 2, 1986, New Caledonia, then an overseas territory, was reinstated on the list of non-self-governing territories, an action that France protested. New Caledonia is the only French-administered territory now on the list; it has enjoyed the status of a collectivité sui generis, or a one-of-a-kind community, since 1999. Under the 1998 Nouméa Accord, its Territorial Congress has the right to call for a referendum on independence after 2014.

Main articles: Special Committee on Decolonization and Declaration on the Granting of Independence to Colonial Countries and Peoples

Another point of controversy is the criteria set down in 1960 by General Assembly Resolution 1541 (XV), 4 Principle 12 of the Annex,[8] which only focused on colonies of the Western World, namely Australia, Belgium, Denmark, France, Italy, Netherlands, New Zealand, Portugal, South Africa, Spain, United Kingdom, and United States. This list of administering states wasn't expanded afterwards.

Nevertheless some of the 111 members who joined the UN after 1960 gained independence from countries not covered by Resolution 1541 and were themselves not classified as "Non-Self-Governing Territories" by the UN. Of these that joined the UN between 1960 and 2008, 11 were independent before 1960 and 71 were included on the list (some as a group). Out of the other 29, seven (mostly Arab) were colonies or protectorates of the "Western" countries, six were part of Yugoslavia, two were part of Czechoslovakia, 12 were part of the Soviet Union (Russia, Ukraine, and Belarus already had UN seats before the dissolution of the USSR) and one each was part of Ethiopia and Pakistan.

^a The Spanish colony of the Spanish Sahara up to 1976, 85% of the territory of Western Sahara is now occupied and administered by Morocco. The rest of the territory is under the control of the Polisario Front and administered by the Sahrawi Arab Democratic Republic. The UN however still considers Spain as administrating country of the whole territory,[11] awaiting the outcome of the ongoing Manhasset negotiations and resulting election to be overseen by the United Nations Mission for the Referendum in Western Sahara.

The following Territories were once listed by the General Assembly as Non-Self-Governing. Dates show the year of independence or other change in a Territory's status that resulted in its removal from the list[12]

Removed due to a status other than independence

Territories that joined another state

Territories that have become independent