Flag of the Netherlands

Flag of the Netherlands 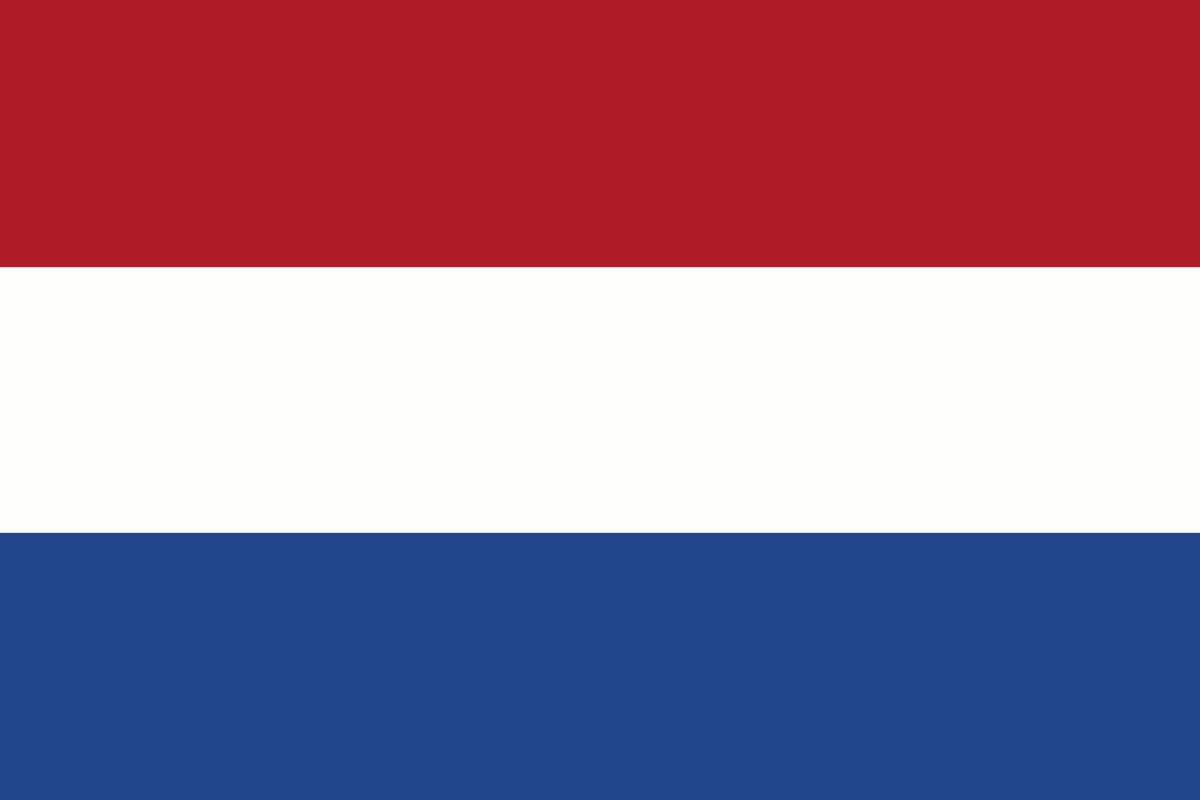 The of the is a horizontal of , , and . Introduced in 1572, it is one of the first tricolours and the oldest still in use today. Since 1937, the flag has officially been the of the and of the .

The of the is a flag. The horizontal es are bands of equal size in the colours, from top to bottom, (bright ), (), and (). The flag proportions (width:length) are 2:3.The first Stadtholder, or ruler, of the Dutch Republic was William of Orange, who joined with Dutch nationalists and led the struggle for independence from Spain. Partly out of respect for him, the first flag adopted by the Dutch was a horizontal tricolor of orange, white, and blue. It became known as the Prinsvlag and was based on the livery of William of Orange. The orange dye was particularly unstable and tended to turn red after a while, so in the mid-17th century, red was made the official color. The flag has flown since then, but was confirmed by Royal Decree only in 1937. As the first revolutionary flag, it has had a seminal influence throughout the world, particularly on the Pan-Slavic colors of Russia. Until about 1800, in the case of both the orange- and the red-striped versions, the number of stripes and their order frequently varied.

The current flag was not the country's first flag. When, at the end of the 15th century, the majority of the Netherlands provinces were united under one lord, one common flag came into use for joint expeditions. This was the banner of the Lord of , which consisted of a white field charged with two bundles of red laurel branches in the form of an X, with flames issuing from the intersection: the Cross of Burgundy. Under the later , this flag remained in use.

The provinces of the Low Countries, however, rose in revolt against King , and the Prince of Orange placed himself at the head of the rebels. The "Watergeuzen" (pro-independence privateers), acting on his instructions, harassed the enemy everywhere they could and they did this under a tricolour "Orange White Blue" ("Orange Blanche Blue", or in Dutch: "Oranje Wit Blauw"/"Oranje Blanje Bleu"), the colours of the Prince's coat of arms. It was thus a flag easily associated with the leader of the rebellion, and the association was also expressed in the name: "the Prince's Flag." In an atlas of Kittensteyn, the first Red White and Blue flag can be seen on a painting imaging a battle between the "Watergeuzen" and the Spaniards. This date was early on in the , the Dutch war of independence. Hence 1572 is the official year of the introduction of this banner. This was commemorated in the Netherlands by the issue of a post stamp in 1972. [ [http://dutchrevolt.leidenuniv.nl/Nederlands/symbolen/rood%20wit%20blauw.htm Symbolen ] ]

The flag had three, sometimes six or even nine horizontal stripes, but also took the form of rays projecting from a circle. The colours were used without any fixed order and it was only towards the end of the 16th century that any degree of uniformity appeared. After 1630, the orange stripe was gradually replaced by a red one, as paintings of that time indicate. Since there was likely no political reason for introducing a non-orange motive in the flag, the probable reason is that orange and blue are faint colors and more difficult to distinguish than red and dark blue, especially at sea. Another explanation is that the orange was originally made of natural/herbal yellow and red. The yellow colour faded out first, leaving a red strip.

The orange-white-blue flag, however, continued to be flown as well and in later times formed the basis for the former South African flag. It is also the basis for the . In addition to the two main flags, a third official flag, that of the States-General, came into being, although it never assumed the importance of the tricolour. Originally it consisted of the red lion of the province of , taken from its coat of arms, on a gold field, holding a sword and seven arrows, and later, of a gold lion on a red field.(See the page on the Coat of arms of the Netherlands.) It marked no contradistinction to the Prince's flag and, in old paintings of ships and sea battles, both flags may be seen flying harmoniously side by side, thus illustrating the complex form of government with its two centres of authority: the (who was always a member of the ) and the States General.

Flag of the Batavian Republic

The revolution in the Netherlands, in the last decade of the 18th century, and the conquest by the French also resulted in another flag. The name "Prince's Flag" was forbidden. There came no change in the red-white-blue (colours to which the French "liberators" were kindly disposed, analogous as they were to their own tricolour), but in 1796 the red division of the flag was embellished with the figure of a Netherlands maiden, with a lion at her feet, in the upper left corner. In one hand she bore a shield with the Roman fasces and in the other a lance crowned with the . This flag had a life as short as that of the for which it was created.

, made king of Holland by his brother the Emperor , wished to pursue a purely Dutch policy and to respect national sentiments as much as possible. He removed the maiden of freedom from the flag and restored the old tricolour. His pro-Dutch policies led to conflicts with his brother, however, and the Netherlands were incorporated into the French Empire. Its flag was replaced by the imperial emblems.

In 1813, the Netherlands regained its independence and the Prince of Orange returned to the country from . In order to demonstrate the attachment of the people to the House of Orange, the orange-white-blue and the red-white-blue fluttered together on the roofs. Which of the two flags should be the national flag was left undecided. Until recently, both had the same rights, although the red-white-blue was generally given precedence. This is apparent from the fact that it was not only hoisted on public buildings but also chosen by the first King as his personal standard, showing the national coat of arms on the white stripes. (Dutch: "Koninginnedag", April 30) or other festive occasions related to the Royal Family.

On , a Royal Decree issued by Queen Wilhelmina finally laid down the red, white and blue colours as the national flag (heraldic colours of bright vermilion, white and cobalt blue).