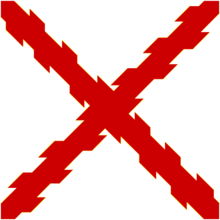 The Cross of Burgundy (Spanish: Cruz de Borgoña) flag was used by Spain 1506-1701 as a naval ensign, and up to 1843 as the land battle flag, and still appears on regimental colours, badges, shoulder patches and company guidons. The year 1506 should be considered its theoretical earliest use in Spain (that is, it made appearance on the standards carried by Philip the Handsome's Burgundian life guards), although about 1525 might be perhaps a more likely estimate. The banner strictly speaking dates back to the early 15th century (allegedly 1408 at the earliest), when the Duke of Burgundy, claimant to the French throne, backed up the English in the Hundred Years' War. The design is a red saltire resembling two crossed, roughly-pruned (knotted) branches, on a white field. In heraldic language, it may be blazoned argent, a saltire ragulée gules.

It represents the cross on which Saint Andrew was crucified. It was chosen by Philip the Handsome of Burgundy after his marriage to Joanna of Castile, as it was the symbol of the house of his mother, Mary of Burgundy. Since Emperor Charles V (King Charles I of Spain), the different armies used the flag with the Cross of Burgundy over different fields. Nevertheless, the official field was still white. Eventually, in 1785 Charles III of Spain decided to change this flag due to the similarities with the English Cross of Saint George, which had brought some dissension in the Spanish navy. Under the new Bourbon king Philip V (1700–1746) and up to Charles III's 1785 new red-yellow-red naval ensign, it seems that the Spaniard naval ensign was white and bore a royal coat of arms in the centre. Allegedly the Burgundian flag was still flown as a jack ensign, that is, as a secondary flag.

It was re-taken by the Carlists, a traditionalist-legitimist movement which fought three wars of succession against Isabella II of Spain, claiming the throne of Spain for Carlos (who would have been the legal heir under the Salic Law, which had been controversially abolished by Ferdinand VII). In the First Carlist War (1833–1840) the Burgundian banner, however, was a banner of the Regent Queen's standing Army rather than Carlist. After 1843 the red Burgundian saltire kept on appearing on the new brand red-yellow army flag under a four-quartered Castilian and Leonese coat of arms on the central yellow fess. Eventually, under the leadership of Manuel Fal Conde, the Cross of Burgundy became the Carlist badge in 1934. 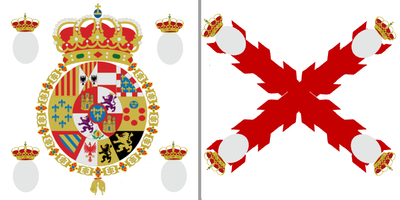 During the Spanish colonization of the Americas the Cross of Burgundy served as the flag of the Viceroyalties of the New World (Bandera de Ultramar). Nations that were once part of the Spanish Empire consider "las aspas de Borgoña" to be a historical flag, particularly appropriate for museum exhibits and the remains of the massive harbor-defense fortifications built in the 17th-18th centuries. At both San Juan National Historic Site in Puerto Rico, and at Castillo de San Marcos National Monument in St. Augustine, Florida, the Cross of Burgundy is daily flown over the historic forts, built by Spain to defend their lines of communication between the territories of their New World empire. The flying of this flag reminds people today of the impact Spain and its military had on world history for over 400 years. 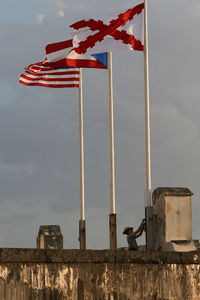 Cross of Burgundy alongside Puerto Rico and U.S. flags at Fort San Cristóbal

The Cross of Burgundy has appeared throughout its history, and continues to appear at present, on numerous flags and coats of arms of bodies having no connection to each other—in various colours and in combination with other symbols. Users mostly have some direct or indirect relation to the historical Burgundy, though such connection can be very vague and lost in the mists of time.

According to some scholars and aviation buffs, however, the Spanish rudder marking (a black saltire on white) derives from the National Air Force deletion of the Republican Air Force red yellow and purple flag, as a result of having lost some warplanes to friendly fire in the summer of 1936.[dubious – discuss]

In Belgium and the Austrian Netherlands