"Vagar is also the old name of " 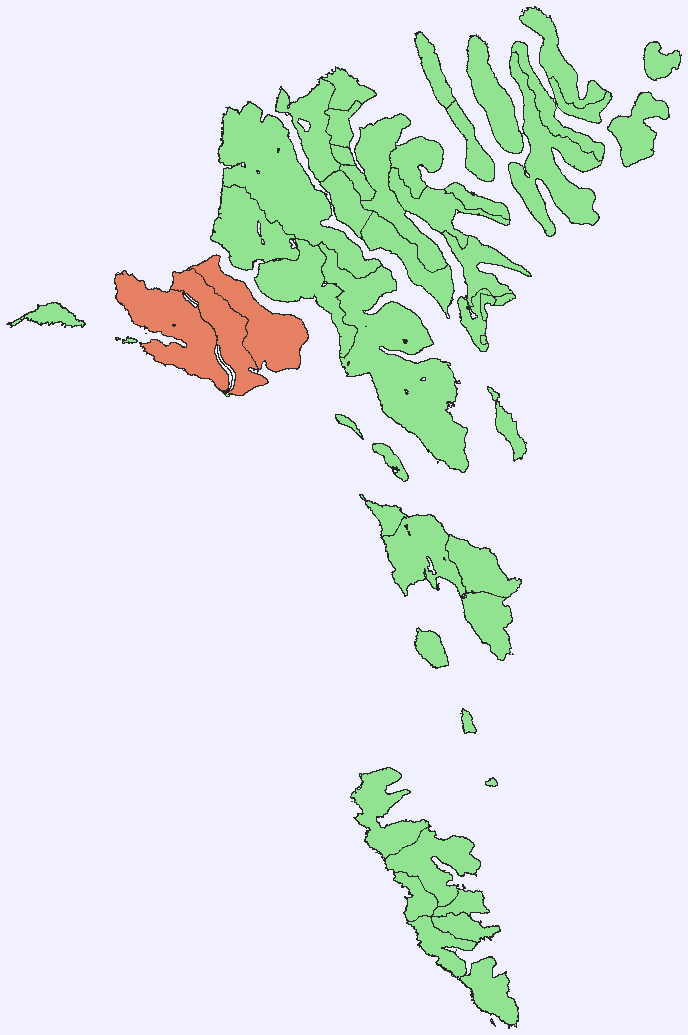 Vágar is one of the 18 islands in the archipelago of the and the most westerly of the "large islands". With a size of 178 km² (about 70 sq. miles), it ranks number three, behind and .

The shape of the island is very distinct, since it resembles a dogs head. is the mouth and is the eye.

Vágar is the first port of call for most foreigners travelling to the Faroe Islands, as it is home to the islands’ only airport, . An airfield was built there during by the British, who occupied the Faroe Islands in a friendly manner. After the war it lay unused for about 20 years, but was then put back into service and expanded/modernised as required. It handles about 170,000 passengers a year. Such large numbers by Faroese standards put a considerable strain on transport facilities, with the result that a road tunnel () measuring 5 km in length and running under the sea now connects Vágar with the two largest islands in the Faroes and therefore the capital .

The tourist attractions on Vágar are excellent and perhaps the best in the Faroe Islands. The country’s two largest lakes - and - are to be found there, and the tourist association organises excursions throughout the summer.

Vágar has three large villages and three small ones, but a hundred years ago there were seven.

The largest is , which has 1025 inhabitants (2003). It is in the middle of the island and so has naturally become a centre, with a police station, doctor’s surgery, co-op and vicarage. It is also a historic village and was home to , a clergyman’s wife who was dubbed “Wicked Beinta”. Jørgen Frantz Jacobsen told the story of her life in his famous novel “Barbara” by , which was filmed in 1997 by . The farmhouse, Kálvalíð to the north is the oldest house in the village and possibly in the Faroe Islands too. It is now the village museum.

To the east of Miðvágur lies , which has a population of 716 (2003). It too is a historic village. It was home to the law speaker of the Faroe Islands until 1816, when the office was abolished and the islands became a Danish administrative district. The clergyman , who was born in Sandavágur in 1819 and became the father of the Faroese written language, was the son of the last law speaker. A dating back to around 1200 was found there in 1917 and can now be seen in Sandavágur church.

The third large village is , which is on the western side of the island, near the airport, and has 980 inhabitants (2003). During World War II, when the airfield was being built in 1942-1944, 5,000 British soldiers lived in Sørvágur, but now few traces remain of their camp to the south of the village. , and the two “drangar” (freestanding cliffs) belong to the village. The view out to them is among the most beautiful in the Faroe Islands.

Vágar has two other old villages: , which lies 4 km west of Sørvágur and has 69 inhabitants (2003), and , which lies further west on and has just 16 inhabitants (2003). Many people have moved away from this village, but it now has a road link in the form of a tunnel through the mountain and it is hoped that the village will start to grow again.

A new village, , which has 41 inhabitants, appeared on Vágar in 1921. It was founded by three men, each of whom was given a plot of land to farm and set up home there with his family. The village is in the upland pastures belonging to Miðvágur and so forms part of Miðvágur District. When the British occupied the Faroe Islands and built the airfield on Vágar, Vatnsoyrar was their headquarters. The local population was evacuated, but was able to return home when the war ended.

At the northernmost point of the island, in the upland pastures belonging to Sandavágur, lay the village of , which was founded in 1835. It grew for a time and at its largest was home to around 70 people. It also had a school, which can be seen on the left on the stamp. The last residents left in 1964.

Another new village, Víkar, was founded in the upland pastures belonging to Gásadalur on the north side of the island in 1833. The area was good for farming, but the settlement was very isolated, and getting to the next village was a difficult business. The last few inhabitants moved away in 1910.

The river's beautiful little bridge forms part of a road that was built to facilitate peat cutting.

If you carry on along this road and then follow the path through the valley, you arrive at lake. There are no motorways or other modern conveniences, but you can enjoy the tranquillity, which is accentuated by the murmuring of the river, the lapping of the waves and the twittering of the birds.

The 41 mountains on Vágar, the major ones are:

Islets and rocks in the sea