The Corps' Combat Development Command, which develops strategies for Marine combat and makes up most of the community of over 12,000 military and civilian personnel (including families) is based here. It has a budget of around $300 million and is the home of the Marine Corps Officer Candidates School. The Marine Corps Research Center at Quantico pursues equipment research and development, especially telecommunications, for the Marine Corps. The Marine Corps Brig, a military prison, is also located at Quantico.

The base as designated as part of the Quantico Marine Corps Base Historic District by the National Register of Historic Places in 2001.[2][3][4] This district includes 122 buildings, two landscapes, a sculpture, and a water tower located within the Mainside area of the base.[5] The contributing properties with separate entries include Tennessee Camp, Camp French, Commanding General's Quarters, and Rising Hill Camp.

Before the Establishment of the Marine Base

The Quantico base is close to the Potomac River. The area was originally inhabited by the Patowomacks (Algonquian) in the 16th century. The name "Quantico" is credited to come from a Native American term, and has been translated to mean "by the large stream." Accounts show that the area was first visited by European explorers in the summer of 1608 with settlement beginning later that year.

After the turn of the century, the area became popular because of tobacco trade in Aquia Harbor. Because traveling on muddy roads in those days was slow, many villages sprung up along the river and its inlets. Additionally, the area was a bustling stopping point on the north-south routes between New York and Florida.

Early settlements and plantations rooted along the flatlands bordering the Potomac. The hills west of the river remained essentially uninhabited until the early 18th century. Prince William County was organized in 1731, when the "Quantico Road" was also opened. This road gave vital access from the western part of the county to this area. By 1759, the road stretched across the Blue Ridge Mountains into the Shenandoah Valley.

The first military presence at Quantico came during the American Revolutionary War, when the Quantico Creek village became a main naval base for the Commonwealth of Virginia's 72-vessel fleet on which many state militia served.

The land was first visited by the Marine Corps in 1816, when a group of Marines traveling by ship to Washington were stopped when their vessel was halted by ice in the Potomac, forcing them to debark and march to the town of Dumfries, Virginia. Here they met a young Captain Archibald Henderson who lived close by. A generous-natured man, Henderson hired a wagon for them and sent them on their way.

During the Civil War, control of the Potomac River became very important to both sides of the two armies. The Confederates picked the Quantico Creek area on the Potomac to set up their gun batteries. This enabled them to make full use of several points where their artillery could reach anything on the water, thus deterring Union use of the water highway. One of these sites included "Shipping Point," the present day site of the Marine Corps Systems Command.

While battles took place in Manassas, Virginia and Fredericksburg, Virginia, the gun positions around Quantico were used until the end of the war. After a 12-day battle at the Spotsylvania Courthouse where the Union lost about 25,000 soldiers, the war moved out of the Quantico area.

Following the war, railroads became a more integral part of transportation. In 1872, the Richmond, Fredericksburg and Potomac Railroad was formed when several railroads north and south met at Quantico Creek. This railroad still runs through the Base and is used daily.

The village came to be called "Quantico" and was built by the Quantico Company. This was the start of a thriving tourist and fishing town that would later be encompassed by Marine Corps Base Quantico. 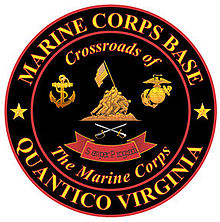 Prior to the base's establishment, the land was owned by the Town of Quantico. At the turn of the century, the Quantico Company was formed on Quantico Creek. The company, which promoted the town as a tourist and excursion center, set up tourist sites, such as refreshment stands, boats, and beaches with dressing rooms to promote business.

By 1916, the Quantico Company began advertising Quantico as "The New Industrial City," and pushed for industry to come to the area. At the same time, the Quantico Shipyards were established on Hospital Point (the land that formerly held the Naval Medical Clinic but is now home to Marine Corps Systems Command) to build ocean freighters and oil tankers. With growing tensions of war in Europe, the construction of U.S. Navy ships was a major money-maker for the Quantico Shipyards. While the Town of Quantico was rapidly growing as a fishing village, excursion center and a shipbuilding center in early 1917, the town was not large or significant, and was suffering many financial difficulties.

Around the same time, Major General George Barnett, then Commandant of the Marine Corps, sent a board to find possible sites for a new Marine Corps base in the Washington, D.C., vicinity.

In 1917, Marine Barracks, Quantico was established on the land currently occupied by today's base. Marine Barracks personnel consisted of 91 enlisted men and four officers. Thousands of Marines were trained here during World War I. By 1920, the Marine Corps schools were founded, as Colonel Smedley Butler put it, "to make this post and the whole Marine Corps a great university."

A soldier accused of disclosing classified information was detained in the Quantico brig in 2010-2011. Demonstrators blocked a gate on Sunday, March 20, 2011. 30 were arrested.[6]

It is the site of the Marine Corps Combat Development Command and Marine Helicopter 1 HMX-1. HMX-1 was the first helicopter squadron to provide rapid transportation of U.S. Presidents, a mission they have continued to carry out to the present day.

The base is the home of major training institutions for both the Marine Corps and federal law enforcement agencies, including: 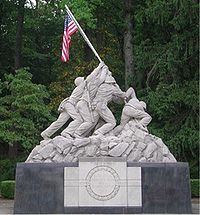 Marine Memorial at the front gate of MCB Quantico.

A replica of the USMC War Memorial, depicting the flag-raising at Iwo Jima, stands at the entrance to the base. (The original stands at the north end of Arlington National Cemetery.)

Marine Corps Base Quantico and the Potomac River surround the town of Quantico. Access to the town is possible only through the base, the Amtrak train station or from the river.