The Marine Corps War Memorial (also called the Iwo Jima Memorial) is a military memorial statue outside the walls of the Arlington National Cemetery and next to the Netherlands Carillon, in Arlington, Virginia, in the United States. The memorial is dedicated to all personnel of the United States Marine Corps who have died in the defense of their country since 1775. The design of the massive sculpture by Felix de Weldon was based on the iconic photo Raising the Flag on Iwo Jima, taken during the Battle of Iwo Jima by Associated Press photographer Joe Rosenthal. 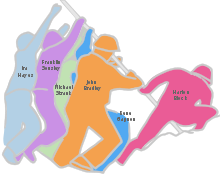 Identity of the six men depicted in the statue.

In 1951, work commenced on creating a cast bronze memorial based on the photo, with the figures 32 feet (9.8 m) tall and the flagpole 60 feet (18 m) long. The granite base of the memorial bears two inscriptions:

The location and date of every major Marine Corps engagement up to the present are inscribed around the base of the memorial. The base is made entirely in the deep black diabase of Lönsboda, a small town and a quarry in the southernmost province of Sweden.[1]

The memorial was officially dedicated by President Dwight D. Eisenhower on November 10, 1954, the 179th anniversary of the Marine Corps. In 1961, President John F. Kennedy issued a proclamation that a Flag of the United States should fly from the memorial 24 hours a day, one of the few official sites where this is required.

The Marines of Marine Barracks, Washington, D.C. use the memorial as a centerpiece of the weekly Sunset Parade featuring the Drum and Bugle Corps and by the Silent Drill Platoon. 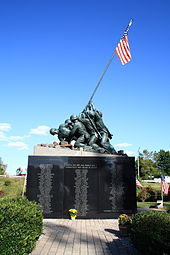 The original plaster working model of the statue currently stands in Harlingen, Texas at the Marine Military Academy, a private Marine Corps-inspired youth military academy. The Academy is also the final resting place of Corporal Block, who was killed in action on Iwo Jima.

The National Iwo Jima Memorial in Newington, Connecticut uses a similar design and is dedicated to the 6,821 US servicemen who died in the battle.

Another statue is located at Fall River Bicentennial Park in Massachusetts.

Another statue is located in Cape Coral, Florida.

A version of the memorial dedicated in commemoration of the 50th anniversary of World War II stands in Knoebels Amusement Resort in Elysburg, Pennsylvania.

There are twelve hands in the memorial corresponding to the six figures depicted. A persistent rumor has attributed the existence of a thirteenth hand to the sculptor's wish to symbolize either all the other Marines who made the flag raising possible, or the hand of God. When informed of the rumor, de Weldon exclaimed, "Thirteen hands. Who needed 13 hands? Twelve were enough."[2]