Shrine of Remembrance in Melbourne, Australia. 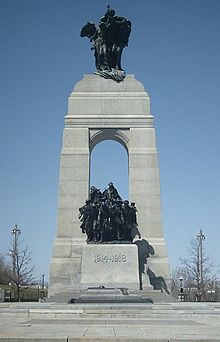 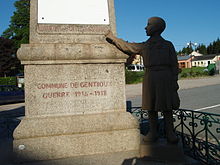 Pacifist memorial at Gentioux, France with the inscription 'Cursed be war' 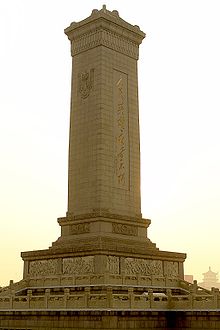 The Monument to the People's Heroes in Beijing, China. 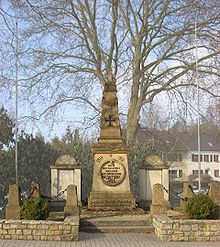 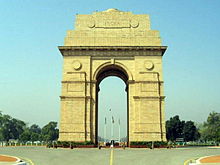 The Yasukuni Shrine in Japan.

The Auckland War Memorial Museum in New Zealand with the Cenotaph out front. 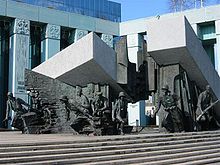 Monument to the Heroes of the Warsaw Uprising in Poland. 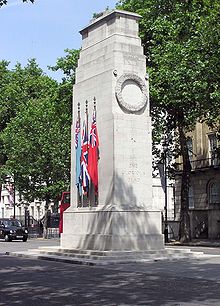 Monument to the Women of World War II in London 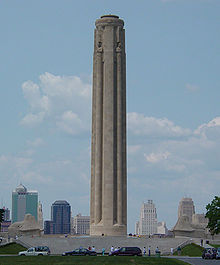 The Liberty Memorial, National World War I Memorial of the USA in Kansas City, Missouri.

A war memorial is a building, monument, statue or other edifice to celebrate a war or victory, or (predominating in modern times) to commemorate those who died or were injured in war.

For most of human history war memorials were erected to commemorate great victories. Remembering the dead was a secondary concern. Indeed in Napoleon's day the dead were shoveled into mass, unmarked graves. The Arc de Triomphe in Paris or Nelson's Column in London contain no names of those killed. By the end of the nineteenth century it was common for regiments in the British Army to erect monuments to their comrades who had died in small Imperial Wars and these memorials would list their names. By the early twentieth century some towns and cities in the United Kingdom raised the funds to commemorate the men from their communities who had fought and died in the Second Anglo-Boer War. However it was after the great losses of the First World War that commemoration took center stage and most communities erected a war memorial listing those men and women who had gone to war and not returned.

In modern times the main intent of war memorials is not to glorify war, but to honor those who have died. Sometimes, as in the case of the Warsaw Genuflection of Willy Brandt, they may also serve as focal points of increasing understanding between previous enemies.

During the First World War, many nations saw massive devastation and loss of life. More people lost their lives in the east than in the west, but the outcome was different. In the west, and in response to the victory there obtained, most of the cities in the countries involved in the conflict erected memorials, with the memorials in smaller villages and towns often listing the names of each local soldier who had been killed in addition (so far as the decision by the French and British in 1916 to construct governmentally designed cemeteries was concerned) to their names being recorded on military headstones, often against the will of those directly involved, and without any opportunity of choice in the British Empire (Imperial War Graves Commission). Massive British monuments commemorating thousands of dead with no identified war grave, such as the Menin Gate at Ypres and the Thiepval memorial on the Somme, were also constructed. The Liberty Memorial, located in Kansas City, Missouri, is a memorial dedicated to all Americans who served in the Great War. For various reasons connected with their character, the same may be said to apply to certain governmental memorials in the United Kingdom (the Cenotaph in London, relating to the Empire in general, and the Scottish National War Memorial in Edinburgh, also with a reference to the Empire, but with particular connections to the United Kingdom, having been opened by the Prince of Wales in 1927 and with the King and the Queen the first visitors and contributors of a casket of the Scottish names for addition within the Shrine).

Pacifist war memorials and those relating to war and peace

After World War I, some towns in France set up pacifist war memorials. Instead of commemorating the glorious dead, these memorials denounce war with figures of grieving widows and children rather than soldiers. Such memorials provoked anger among veterans and the military in general. The most famous is at Gentioux-Pigerolles in the department of Creuse. Below the column which lists the name of the fallen, stands an orphan in bronze pointing to an inscription ‘Maudite soit la guerre’ (Cursed be war). Feelings ran so high that the memorial was not officially inaugurated until 1990 and soldiers at the nearby army camp were under orders to turn their heads when they walked past. Another such memorial is in the small town of Équeurdreville-Hainneville (formerly Équeurdreville) in the department of Manche. Here the statue is of a grieving widow with two small children.[1][2] There seems to be no exact equivalent form of memorial within the United Kingdom but evidently sentiments were in many cases identical. Thus, and although it seems that this has never been generally recognized, it can be argued that there was throughout the United Kingdom a construction of war memorials with reference to the concept of peace (e.g. a war memorial in what is now known as Hartlepool (previously West Hartlepool) with the inscription 'Thine O Lord is the Victory' relating to amongs other architecture the 1871 Royal Albert Hall of Arts and Sciences with a frieze including the same words and concluding 'Glory be to God on high and on earth peace'). It seems also to be the case that relatives were after the First World War (and possibly after other subsequent wars) in the United Kingdom and possibly also in France given the option, presumably on the basis that the issue was historically somewhat controversial, of not having the names of their military casualties included on war memorials, notwithstanding that this approach was arguably either in clear parallel with or in support of the form of the memorials erected in the Russian Soviet Socialist Republic, these questions being at the time (the First World War) therefore reflected in political controversy.

In many cases, World War I memorials were later extended to show the names of locals who died in the World War II in addition. Since that time memorials to the dead in other conflicts such as the Korean War and Vietnam War have also noted individual contributions, at least in the West.

They shall grow not old, as we that are left grow old.
Age shall not weary them, nor the years condemn.
At the going down of the sun and in the morning
We will remember them.

Blow out, you bugles, over the rich Dead.
There are none of these so lonely and poor of old,
But dying has made us rarer gifts than gold.

I have fought the good fight,
I have finished my course,
I have kept the faith.

When You Go Home, Tell Them Of Us And Say,
For Their Tomorrow, We Gave Our Today

Many cemeteries tended by the Commonwealth War Graves Commission have an identical war memorial called the Cross of Sacrifice designed by Sir Reginald Blomfield that varies in height from 18 ft to 32 ft depending on the size of the cemetery. If there are one thousand or more burials, a Commonwealth cemetery will contain a Stone of Remembrance, designed by Sir Edwin Lutyens with words from the Wisdom of Sirach: "Their name liveth for evermore"; all the Stones of Remembrance are 11 ft 6 ins long and 5 ft high with three steps leading up to them.

Arlington National Cemetery has a Canadian Cross of Sacrifice with the names of all the citizens of the USA who lost their lives fighting in the Canadian forces during the Korean War and two World Wars.

Unsurprisingly, war memorials can be politically controversial. A notable example are the controversies surrounding Yasukuni Shrine in Japan, where a number of convicted World War II war criminals are interred. Chinese and Korean representatives have often protested against the visits of Japanese politicians to the shrine. The visits have in the past led to severe diplomatic conflicts between the nations, and Japanese businesses were attacked in China after a visit by former Japanese Prime Minister Junichiro Koizumi to the shrine was widely reported and criticized in Chinese and Korean media.[3]

In a similar case, former German chancellor Helmut Kohl was criticised by writers Günter Grass and Elie Wiesel for visiting the war cemetery at Bitburg (in the company of Ronald Reagan) which also contained the bodies of SS troops.[4] Unlike the case of the Yasukuni Shrine, there was no element of intentional disregard of international opinion involved, as is often claimed for the politician visits to the Japanese shrine.

Soviet World War II memorials included quotes of Joseph Stalin's texts, frequently replaced after his death. Such memorials were often constructed in city centres and now are sometimes regarded as symbols of Soviet occupation and removed, which in turn may spark protests (see Bronze Soldier of Tallinn).

The memorial arch to the Royal Dublin Fusiliers who fought in the Boer War, erected at 1907 in St. Stephen's Green, Dublin, was called "Traitors' Gate" by the Redmondites and later Irish Republicans, from whose point of view Irish soldiers going off to fight the British Empire's wars were traitors to Ireland. The sharpness of the controversy gradually faded, and while the term "Traitors' Gate" is still in occasional colloquial use in Dublin daily life, it has mostly lost its pejorative meaning.

In Australia, in 1981, historian Henry Reynolds raised the issue of whether war memorials should be erected to Indigenous Australians who had died fighting against British invaders on their lands.

"How, then, do we deal with the Aboriginal dead? White Australians frequently say that 'all that' should be forgotten. But it will not be. It cannot be. Black memories are too deeply, too recently scarred. And forgetfulness is a strange prescription coming from a community which has revered the fallen warrior and emblazoned the phrase 'Lest We Forget' on monuments throughout the land. [...] [D]o we make room for the Aboriginal dead on our memorials, cenotaphs, boards of honour and even in the pantheon of national heroes? If we are to continue to celebrate the sacrifice of men and women who died for their country can we deny admission to fallen tribesmen? There is much in their story that Australians have traditionally admired. They were ever the underdogs, were always outgunned, yet frequently faced death without flinching. If they did not die for Australia as such they fell defending their homelands, their sacred sites, their way of life. What is more the blacks bled on their own soil and not half a world away furthering the strategic objectives of a distant Motherland whose influence must increasingly be seen as of transient importence in the history of the continent."[5]

Reynolds' suggestion proved controversial.[6] Occasional memorials have been erected to commemorate Aboriginal people's resistance to colonisation, or to commemorate white massacres of Indigenous Australians. These memorials have often generated controversy. For example, a 1984 memorial to the Kalkadoon people's "resistance against the paramilitary force of European settlers and the Queensland Native Mounted Police" was "frequently shot at" and "eventually blown up".[7]

With the advent of long war, some memorials are constructed before the conflict is over, leaving space for extra names of the dead. For instance, the Northwood Gratitude and Honor Memorial in Irvine, CA, memorializes an ongoing pair of US wars, and has space to inscribe the names of approximately 8,000 fallen servicemembers,[8] while the UK National Memorial Arboretum near Lichfield in England hosts the UK's National Armed Forces Memorial which displays the names of the more than 16,000 people who have already died on active service in the UK armed forces since World War Two, with more space available for future fatalities. Newly added names are dedicated each year at a special eucumenical service in the presence of a family members, veterans and invited dignitaries.