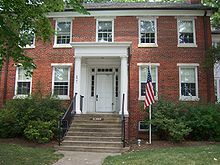 For the 1898 Camp Meade[6] at Middletown PA and the "Meadeboro" camp near the Pickett's Charge field, see Harrisburg ANGB and 1913 Gettysburg reunion.

Initially called Camp Annapolis Junction, the post was opened as "Camp Admiral" in 1917 on 29.7 sq mi (77 km2) acquired for a training camp. The post was renamed[when?] Camp George Gordon Meade after construction of 1,460 buildings,[citation needed] and in 1919, the Camp Benning tank school--formed from the WWI Camp Colt and Tobyhanna schools--was transferred to the fort before the Tank Corps was disbanded.[7] Renamed to Fort Leonard Wood (February 1928[8]-March 5, 1929),[9] the fort's Experimental Motorized Forces in the summer and fall of 1928 tested vehicles and tactics in expedition convoys (Camp Meade observers had joined the in-progress 1919 Motor Transport Corps convoy). In 1929, the fort's 1st Tank Regiment encamped on the Gettysburg Battlefield;[3] and Fort Meade was used as a WWII recruit training post and prisoner of war camp. The Second U.S. Army Headquarters transferred to the post on June 15, 1947;[9] and in the 1950s,[specify] the post became headquarters of the National Security Agency.

Cold War air defense
From the 1950s until the 1970s, the Fort Meade radar station had various radar equipment and control systems for air defense (e.g., the 1st Martin AN/FSG-I Antiaircraft Defense System).[10] Fort Meade also had the first Nike Ajax surface-to-air missiles in December 1953 (operational May 1954),[4] and an accidental firing occurred in 1955 with Battery C, 36th AAA Missile Battalion). In 1962, the Army's Headquarters and Headquarters Battery, 13th Air Defense Artillery Group, transferred from Meade to Homestead AFB for initial deployment of MIM-23 Hawk missiles, and during the Cuban Missile Crisis, the 6th Battalion (HAWK), 65th Artillery at Fort Meade (a United States Strike Command unit) was deployed to the Miami/Key West area[5] (the 8th Battalion (Hawk) was at the fort in late 1964.)[6] Fort Meade bomb disposal experts were dispatched to secure nuclear bombs in the 1964 Savage Mountain B-52 crash.

In 1977, a merger organized the fort's U.S. Army Intelligence Agency as part of the United States Army Intelligence and Security Command. On 1 October 1991, a wing of the Air Force Intelligence Command transferred to Fort Meade, and the organization was replaced by[not in citation given] the 70th Operations Group on May 1, 2005.[11] In the early 1990s, 12.7 sq mi (33 km2) was transferred from the post to the Patuxent Research Refuge.[12] A planned closure of the post in the 1990s was not implemented,[when?] and the Defense Information School moved to the fort in 1995.[7] The 311th Signal Command headquarters was at Fort Meade from 1996-September 2006. The 70th Intelligence Wing headquarters was established at Fort Meade on July 17, 2000, and the Base Realignment and Closure, 2005, designated Fort Meade to gain ~5,700 positions making it the 3rd largest workforce of any Army installation.[13]

After United States Cyber Command was established at the post in 2009; on April 15, 2011, the Defense Information Systems Agency ribbon-cutting for the move from Arlington, Virginia, was at the agency's Fort Meade complex of 95 acres (38 ha).[5]

The Fort George G. Meade Museum exhibits the Post's historical artifacts, including uniforms, insignia and equipment. The Museum also a small collection of vehicles, including an FT-17, a MK VIII Liberty Tank, an M3A1 Stuart, an M4A3E8 Sherman, an M41 Walker Bulldog, an M47 Patton, armored personnel carriers such as an M113, M114 and M84, a Nike Ajax missile, and a UH-1H helicopter.

For the NSA-related museum outside of this post, see National Cryptologic Museum.