Fort Detrick is the largest employer in Frederick County, Maryland.

Five farms originally constituted what is today known as “Area A” with 800 acres (320 ha), or the main post area of Fort Detrick, where most installation activities are located. ("Area B" — known as "The Farm" and consisting of nearly 400 acres (160 ha) — was purchased in 1946 to provide a test area west of Rosemont Avenue, then called Yellow Springs Pike. In addition, the post's water and waste water treatment plants comprise about 16 acres (6.5 ha) on the banks of the Monocacy River.)

Fort Detrick traces its roots to a small municipal airport established at Frederick, Maryland in 1929. It was operated by a single person and the field was one of a string of emergency airfields between Cleveland, Ohio, and Washington, DC until 1938. The field was named in honor of squadron flight surgeon Major Frederick L. Detrick who served in France during World War I and died in June 1931 of a heart attack. The first military presence there was the encampment, on 10 August 1931 (two months after the Major's death), of his unit: the 104th Observation Squadron of the 29th Division, Maryland National Guard. The Squadron flew de Havilland observation biplanes and Curtiss JN-4 "Jennies".[1]

A concrete and tarmac airfield replaced the grass field in 1939, and an upgraded Detrick Field served as a Cadet Pilot Training Center until the country's entry into World War II. Detrick Field was formally leased from the City of Frederick in 1940 (having previously been leased from the state for just 2 weeks per year). The last airplanes departed Detrick Field in December 1941 and January 1942 after the Japanese attack on Pearl Harbor. All aircraft and pilots in the 104th and the cadet program were reassigned after the Declaration of War to conduct antisubmarine patrols off the Atlantic Coast. The 2nd Bombardment Squadron, U.S. Army Air Corps was reconstituted at Detrick Field between March and September 1942, when it deployed to England to become the nucleus of the new Eighth Air Force headquarters. Thereafter, the base ceased to be an aviation center.

On 9 March 1943, the government purchased 154 acres (62 ha) encompassing the original 92 acres (37 ha) and re-christened the facility "Camp Detrick". The same year saw the establishment of the U.S. Army Biological Warfare Laboratories (USBWL), responsible for pioneering research into biocontainment, decontamination, gaseous sterilization, and agent purification. The first commander, Lt. Col. William S. Bacon, and his successor, Col. Martin B. Chittick, oversaw the initial $1.25 million renovation and construction of the base.

During World War II, Camp Detrick and the USBWL became the site of intensive biological warfare (BW) research using various pathogens. This research was originally overseen by pharmaceuticals executive George W. Merck and for many years was conducted by Ira L. Baldwin, professor of bacteriology at the University of Wisconsin. Baldwin became the first scientific director of the labs. He chose Detrick Field for the site of this exhaustive research effort because of its balance between remoteness of location and proximity to Washington, DC — as well as to Edgewood Arsenal, the focal point of U.S. chemical warfare research. Buildings and other facilities left from the old airfield — including the large hangar — provided the nucleus of support needed for the startup. The 92 acres (37 ha) of Detrick Field were also surrounded by extensive farmlands that could be procured if and when the BW effort was expanded.[2]

The Army's Chemical Warfare Service was given responsibility and oversight for the effort that one officer described as "cloaked in the deepest wartime secrecy, matched only by ... the Manhattan Project for developing the Atomic Bomb".[3] Three months after the start of construction, an additional $3 million was provided for five additional laboratories and a pilot plant. Lt. Col. Bacon was authorized 85 officers, 373 enlisted personnel, and 80 enlisted Women's Army Auxiliary Corps (WAAC) members under two WAAC officers. At its peak strength in 1945, Camp Detrick had 240 officers and 1,530 enlisted personnel including WAACs.[4]

The elaborate security precautions taken at Camp Detrick were so effective that it was not until January 1946, 4 months after VJ Day that the public learned of the war-time research in biological weapons.[5]

In 1952, the Army purchased over 500 acres (200 ha) more of land located between West 7th Street and Oppossumtown Pike to expand the permanent research and development facilities.

Two workers at the base died from exposure to anthrax in the 1950s. (Another also died in 1964 from viral encephalitis.[6])

There was a building on the base, Building 470 locally referred to as "Anthrax Tower". Building 470 was a pilot plant for testing optimal fermentor and bacterial purification technologies. The information gained in this pilot plant shaped the fermentor technology that was ultimately used by the pharmaceutical industry to revolutionize production of antibiotics and other drugs. Building 470 was torn down in 2003 without any adverse effects on the demolition workers or the environment. The facility acquired the nickname "Fort Doom" while offensive biological warfare research was undertaken there. 5,000 bombs containing anthrax spores were produced at the base during World War II.[6]

From 1945 to 1955 under Project Paperclip and its successors, the U.S. government recruited over 1,600 German and Austrian scientists and engineers in a variety of fields such as aircraft design, missile technology and biological warfare. Among the specialists in the latter field who ended up working in the U.S. were Walter Schreiber, Erich Traub and Kurt Blome, who had been involved with medical experiments on concentration camp inmates to test biological warfare agents. Since Britain, France and the Soviet Union were also engaged in recruiting these scientists, the Joint Intelligence Objectives Agency (JIOA) wished to deny their services to other powers, and therefore altered or concealed the records of their Nazi past and involvement in war crimes.[7]

The U.S. General Accounting Office issued a report on September 28, 1994, which stated that between 1940 and 1974, DOD and other national security agencies studied hundreds of thousands of human subjects in tests and experiments involving hazardous substances.

The quote from the study:

Many experiments that tested various biological agents on human subjects, referred to as Operation Whitecoat, were carried out at Fort Detrick, Maryland, in the 1950s. The human subjects originally consisted of volunteer enlisted men. However, after the enlisted men staged a sitdown strike to obtain more information about the dangers of the biological tests, Seventh-day Adventists [SDAs] who were conscientious objectors were recruited for the studies.[8]

The Army purchased an additional 147 acres (59 ha) in 1946 to increase the size of the original "Area A" as well as 398 acres (161 ha) located west of Area A, but not contiguous to it, to provide a test area known as Area B. In 1952, another 502.76 acres (203.5 ha) were purchased between West 7th Street and Oppossumtown Pike to expand the permanent research and development facilities.

Jeffrey Alan Lockwood finds that the biological warfare program at Ft. Detrick began to research the use of insects as disease vectors going back to World War II and also employed German and Japanese scientists after the war who had experimented on human subjects among POWs and concentration camp inmates. Scientists used or attempted to use a wide variety of insects in their biowar plans, including fleas, ticks, ants, lice and mosquitoes—especially mosquitoes that carried the yellow fever virus. They also tested these in the United States. Lockwood thinks that it is very likely that the U.S. did use insects dropped from aircraft during the Korean War to spread diseases, and that the Chinese and North Koreans were not simply engaged in a propaganda campaign when they made these allegations, since the Joint Chiefs of Staff and Secretary of Defense had approved their use in the fall of 1950 at the "earliest practicable time". At that time, it had five bio warfare agents ready for use, three of which were spread by insect vectors. By 1952, the U.S. had dropped insects carrying a wide variety of diseases over China and North Korea, including plague, anthrax, encephalitis, cholera, dysentery, neurotropic viruses, and plant and livestock pathogens.[9]

Camp Detrick was designated a permanent installation for peacetime biological research and development shortly after World War II, but that status was not confirmed until 1956, when the post became Fort Detrick. Its mandate was to continue its previous mission of biomedical research and its role as the world’s leading research campus for biological agents requiring specialty containment.

On Veterans Day, November 11, 1969, President Richard M. Nixon asked the Senate to ratify the 1925 Geneva Protocol prohibiting the use of chemical and biological weapons. Nixon assured Fort Detrick its research would continue. On November 25, 1969, Nixon made a statement outlawing offensive biological research in the United States. Since that time any research done at Fort Detrick has been purely defensive in nature,[citation needed] focusing on diagnostics, preventives and treatments for BW infections. This research is undertaken by the U.S. Army Medical Research Institute of Infectious Diseases (USAMRIID) which transitioned from the previous U.S. Army Medical Unit (USAMU) and was re-named in 1969.

Many former laboratories and some land made available by the disestablishment of the offensive biological warfare program were ultimately transferred to the U.S Department of Health and Human Services during the 1970s and later. The National Cancer Research and Development Center (now the National Cancer Institute-Frederick) was established in 1971 on a 69-acre (28 ha) parcel in Area A ceded by the installation.

In 1989 base researchers identified the Ebola virus in a monkey imported to the area from the Philippines.[6]

In 2009, author H.P. Albarelli published the documented book A Terrible Mistake: The Murder of Frank Olson and the CIA's Secret Cold War Experiments about Frank Olson's death and the experiments conducted at Fort Detrick. The book is based on documents released under FOIA and numerous other documents and interviews to the police and investigators.[10][11]

In the 1980s and '90s, Jakob Segal, claimed that Fort Detrick was the site where the United States government invented HIV.

USAMRIID had been the principal consultant to the FBI on scientific aspects of the 2001 Anthrax Attacks, which had infected 22 people and killed five.[12] While assisting with the science from the beginning, it also soon became the focus of the FBI's investigation of possible perpetrators (see Steven Hatfill). In July 2008, a top U.S. biodefense researcher at USAMRIID committed suicide just as the FBI was about to lay charges relating to the incidents. The scientist, Bruce Edwards Ivins, who had worked for 18 years at USAMRIID, had been told about the impending prosecution. The FBI's identification of Ivins in August 2008 as the Anthrax Attack perpetrator remains controversial and several independent government investigations which will address his culpability are ongoing. Although the anthrax preparations used in the attacks were of different grades, all of the material derived from the same bacterial strain. Known as the Ames strain, it was first researched at USAMRIID. The Ames strain was subsequently distributed to at least fifteen bio-research labs within the U.S. and six locations overseas.

In June, 2008 the Environmental Protection Agency said it planned to add the base to the Superfund list of the most polluted places in the country.[6]

About 7,900 people work at Fort Detrick. The base is the largest employer in Frederick County and contributes more than $500 million into the local economy annually.[13]

The following units and organizations (military and otherwise) are located on the Fort Detrick installation:

In addition, Fort Detrick is the support facility for the Raven Rock Mountain Complex[3]. 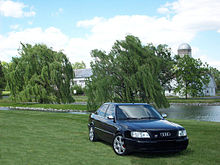 Fort Detrick has three sites (and four structures) on the National Register of Historic Places:

In addition, the following sites on the installation are of historic interest: