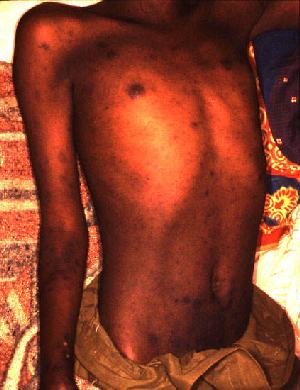 Typhus is any of several similar diseases caused by -borne bacteria.Fact|date=September 2008 The name comes from the Greek "typhos", meaning smoky or lazy, describing the state of mind of those affected with typhus. The causative organism "" is an obligate and cannot live long outside living cells. Rickettsia is in rodent hosts, including mice and rats, and spreads to humans through mites, fleas and body lice. The vector flourishes under conditions of poor hygiene, such as those found in prisons, concentration camps, or refugee camps, amongst the homeless, or until the middle of the 20th century, in armies in the field. In developed countries, typhus is primarily transmitted by common fleas. In countries, typhus is often mistaken for .

Epidemic typhus (also called "Camp Fever", "Jail Fever", "Hospital Fever", "Ship Fever", "Famine Fever", "Petechial Fever", and "louse-borne typhus") [cite web |url=http://www.sedgleymanor.com/diseases/diseases_p-t.html |title=Diseases P-T at sedgleymanor.com |accessdate=2007-07-17 |format= |work=] is so named because the disease often causes epidemics following wars and natural disasters. The causative organism is "", transmitted by the ("Pediculus humanus corporis"). [Gray, Michael W. [http://www.nature.com/nature/journal/v396/n6707/full/396109a0.html Rickettsia, typhus and the mitochondrial connection] Nature 396, 109 - 110 ( )] .] [Jan O. Andersson, Siv G.E. Andersson, “A century of typhus, lice, and Rickettsia” , Res. Microbiol. 151 (2000) 143–150.] Feeding on a human who carries the bacillus infects the louse. "R. prowazekii" grows in the louse's gut and is excreted in its . The disease is then transmitted to an uninfected human who scratches the louse bite (which itches) and rubs the feces into the wound. The is one to two weeks. "R. prowazekii" can remain viable and virulent in the dried louse feces for many days. Typhus will eventually kill the louse, though the disease will remain viable for many weeks in the dead louse.

Symptoms include severe headache, a sustained high fever, cough, , severe , , falling , , , and . A rash begins on the chest about five days after the fever appears, and spreads to the trunk and extremities but does not reach the face, palms and soles. A symptom common to all forms of typhus is a fever which may reach 39°C (102°F).

The infection is treated with . Intravenous fluids and may be needed to stabilize the patient. The mortality rate is 10% to 60%, but is vastly lower if antibiotics such as are used early. Infection can also be prevented via vaccination. Brill-Zinsser disease, first described by in 1913 at Mount Sinai Hospital in , is a mild form of epidemic typhus which recurs in someone after a long period of latency (similar to the relationship between and ). This type of recurrence can also occur in immunosuppressed patients.

Epidemic typhus is found most frequently during times of war and privation. For example, typhus killed many thousands of prisoners in s during . The abysmally low standards of hygiene enforced in camps such as Theresienstadt and Bergen-Belsen created conditions where diseases such as typhus flourished. A possible scenario for typhus epidemics in the 21st Century would be in refugee camps during a major famine or natural disaster.

Endemic typhus (also called "flea-borne typhus" and "murine typhus" or "rat flea typhus") is caused by the bacteria "", and is transmitted by the s that infest s.

(also called "chigger-borne typhus") is caused by "" and transmitted by chiggers, which are found in areas of heavy scrub vegetation. This variety of typhus was known in Japan as "tsutsugamushi disease", hence the formal name, and was also prevalent in and . According to J. R. Audy, severe epidemics of the disease occurred among troops in what was then known as and during . [Audy, J. R. "Red Mites and Typhus." London: The Athlone Press. 1968. ISBN 0485263181 ] Symptoms include fever, headache, muscle pain, cough, and symptoms. More virulent strains of "O. tsutsugamushi" can cause and . Contact with species related to the chigger mite, found in many parts of the world, can also cause an intense irritation of the human skin.

The first major step in the development of the was 's 1909 discovery that were the vectors for epidemic typhus. This made it possible to isolate the bacteria causing the disease and develop a vaccine; he was awarded the 1928 for this work. Nicolle attempted a vaccine but was not successful in making one that worked on a large enough scale. [Gross, Ludwik (1996) [http://www.pnas.org/cgi/reprint/93/20/10539.pdf "How Charles Nicolle of the Pasteur Institute discovered that epidemic typhus is transmitted by lice: reminiscences from my years at the Pasteur Institute in Paris"] Proc. Natl. Acad. Sci. Vol. 93, pp. 10539-10540.]

in 1916 then proved that the bacteria "Rickettsia prowazekii" was the agent responsible for typhus; he named bacteria after and , two zoologists who died investigating a typhus epidemic in a prison camp in 1915. Once these crucial facts were recognized, in 1930 was able to fashion a practical and effective vaccine production method [* [http://www.lwow.home.pl/Weigl/krynski/teoria.html Weigl's method of intrarectal inoculation of lice in production of typhus vaccine and experimental works with Rickettsia Prowazeki] ] by grinding up the insides of infected lice that had been drinking blood. It was, however, very dangerous to produce, and carried a high likelihood of infection to those who were working on it.

A safer mass-production-ready method using s was developed by Herald R. Cox in 1938.

The first description of typhus was probably given in 1083 at a convent near , . [ [http://www.lwow.home.pl/Weigl.html Maintenance of human-fed live lice in the laboratory and production of Weigl's exanthematous typhus vaccine] by Waclaw Szybalski (1999)] In 1546, , a physician, described typhus in his famous treatise on viruses and contagion, "De Contagione et Contagiosis Morbis". [Fracastoro, Girolama, "De Contagione et Contagiosis Morbis" (1546).]

Before a vaccine was developed in World War II, typhus was a devastating disease for humans and has been responsible for a number of throughout history.

During the second year of the (), the of Athens in ancient was hit by a devastating epidemic, known as the , which killed, among others, and his two elder sons. The plague returned twice more, in 429 BC and in the winter of 427/6 BC. Epidemic typhus is a strong candidate for the cause of this disease outbreak, supported by both medical and scholarly opinions. [At a January 1999 medical conference at the University of Maryland, Dr. David Durack, consulting professor of medicine at notes: "Epidemic typhus fever is the best explanation. It hits hardest in times of war and privation, it has about 20 percent mortality, it kills the victim after about seven days, and it sometimes causes a striking complication: gangrene of the tips of the fingers and toes. The Plague of Athens had all these features." see also: http://www.umm.edu/news/releases/athens.html] [Gomme, A. W., edited by A. Andrewes and K. J. Dover. "An Historical Commentary on Thucydides, Volume 5. Book VIII" Oxford University Press, 1981. ISBN 0-19-814198-X.]

Typhus also arrived in Europe with soldiers who had been fighting on . The first reliable description of the disease appears during the Spanish siege of in 1489. These accounts include descriptions of fever and red spots over arms, back and chest, progressing to delirium, gangrenous sores, and the stink of rotting flesh. During the siege, the Spaniards lost 3,000 men to enemy action but an additional 17,000 died of typhus.

Typhus was also common in prisons (and in crowded conditions where lice spread easily), where it was known as "Gaol fever" or "Jail fever". Gaol fever often occurs when prisoners are frequently huddled together in dark, filthy rooms. Imprisonment until the next term of court was often equivalent to a death sentence. It was so infectious that prisoners brought before the court sometimes infected the court itself. Following the Assize held at in 1577, later deemed the , over 300 died from , including Sir Robert Bell Lord Chief Baron of the Exchequer. The outbreak that followed, between 1577 to 1579, killed about 10% of the English population. During the Lent held at (1730) typhus caused the death of the Lord Chief Baron, as well as the High Sheriff, the sergeant, and hundreds of others. During a time when there were 241 capital offenses--more prisoners died from 'gaol fever' than were put to death by all the public executioners in the realm. In 1759 an English authority estimated that each year a quarter of the prisoners had died from Gaol fever. [Ralph D. Smith, Comment, Criminal Law -- Arrest -- The Right to Resist Unlawful Arrest, 7 NAT. RESOURCES J. 119, 122 n.16 (1967) (hereinafter Comment) (citing John Howard, The State of Prisons 6-7 (1929)) (Howard's observations are from 1773 to 1775). Copied from State v. Valentine May 1997 132 Wn.2d 1, 935 P.2d 1294] In , typhus frequently broke out among the ill-kept prisoners of and then moved into the general city population.

Epidemics occurred throughout Europe from the 16th to the 19th centuries, and occurred during the , the and the . During 's retreat from in 1812, more French soldiers died of typhus than were killed by the ns. A major epidemic occurred in between 1816-19, and again in the late 1830s, and yet another major typhus epidemic occurred during the between 1846 and 1849. The Irish typhus spread to England, where it was sometimes called "Irish fever" and was noted for its virulence. It killed people of all social classes, since lice were endemic and inescapable, but it hit particularly hard in the lower or "unwashed" social strata.

In America, a typhus epidemic killed the son of in in 1843 and struck in in 1837. Several epidemics occurred in Baltimore, Memphis and between 1865 and 1873. Typhus fever was also a significant killer during the US Civil War, although fever was the more prevalent cause of US Civil War "camp fever". Typhoid is a completely different disease from typhus.

During typhus caused three million deaths in Russia and more in and . De-lousing stations were established for troops on the Western front but the disease ravaged the armies of the Eastern front, with over 150,000 dying in Serbia alone. Fatalities were generally between 10 to 40 percent of those infected, and the disease was a major cause of death for those nursing the sick. Between 1918 and 1922 typhus caused at least 3 million deaths out of 20&ndash;30 million cases. In Russia after World War I, during a civil war between the White and Red armies, typhus killed three million, largely civilians. Even larger epidemics in the post-war chaos of Europe were only averted by the widespread use of the newly discovered to kill the lice on millions of refugees and displaced persons.

During typhus struck the as it invaded Russia in 1941.

Following the development of a vaccine during World War II, epidemics have usually occurred in , the and parts of Africa.

* (1847) In "" by , an outbreak of typhus occurs in Jane's school Lowood, highlighting the unsanitary conditions the girls live in.

* (1862) In "" by , Evgeny Bazarov dissects a local peasant and dies due to contracting typhus.

* (c. 1974) In "" (TV series), an outbreak of typhus hits killing several. It is traced to below market cost residents had been purchasing to avoid the high cost of the local mill. The corn meal had been infested by rats.

* (1978) O'Brian, Patrick. "" Fictional presentation of typhus - while sailing aboard the "Leopard" an outbreak of 'gaol-fever' strikes the crew.

* (1935/2000) , "" although a touch outdated on the science, contains many useful cross-references to classical and historical impact of typhus.