The Airco DH.4 was a British two-seat biplane day-bomber of the First World War. It was designed by Geoffrey de Havilland (hence "DH") for Airco, and was the first British two seat light day-bomber to have an effective defensive armament. It first flew in August 1916 and entered service with the Royal Flying Corps (RFC) in March 1917. The majority of DH.4s were actually built as general purpose two-seaters in the USA, for service with the American forces in France.

The DH.4 was designed by Geoffrey de Havilland as a light two-seat day bomber powered by the new BHP engine. The prototype first flew in August 1916, powered by a prototype BHP engine rated at 230 hp (170 kW).[2] While the DH.4 trials were promising, the BHP engine required major redesign before entering production, and the Rolls-Royce Eagle engine was selected as the DH.4's powerplant. The first order for 50 DH.4s, powered by 250 hp (186 kW) Eagle III engines was placed at the end of 1916.[3]

The aircraft was a conventional tractor biplane, of all wooden construction and with two bay wings. The crew of two were accommodated in widely spaced cockpits, separated by the fuel tank.[3] The observer was armed with one or two .303 in (7.7 mm) Lewis Guns fitted on a Scarff ring, while a synchronised Vickers machine gun was fitted to the nose. A bombload of 460 lb (210 kg) could be fitted to external racks. While the crew arrangement gave good fields of view for the pilot and observer, it caused communication problems between the two crew members, particularly in combat, where the speaking tube linking the cockpits was of limited use.[4]

As production continued, DH.4s were fitted with Eagle engines of increasing power, settling on the 375 hp (280 kW) Eagle VIII, which powered the majority of front line DH.4s by the end of 1917. Because of the chronic shortage of Rolls-Royce aero engines in general, and Eagles in particular, alternative engines were also investigated, with the BHP (230 hp/170 kW), the Royal Aircraft Factory RAF3A (200 hp/150 kW), the Siddeley Puma (230 hp/170 kW) and the 260 hp (190 kW) Fiat, all being used in production aircraft.[3] None of these engines could match the Rolls-Royce Eagle, however there were simply not enough Eagles available.

In American production, the new Liberty engine proved suitable as a DH.4 powerplant although the engine produced a slightly inferior performance to the Eagle. The Liberty was also to eventually power the British DH.9A.

Production was by Airco, F.W. Berwick and Co, Glendower Aircraft Company, Palladium Autocars, Vulcan Motor and Engineering, and the Westland Aircraft Works in the UK. A total of 1,449 aircraft (from orders for 1,700 aircraft) were made in the UK for the RFC and RNAS.[5] SABCA of Belgium made a further 15 in 1926.[6]

In the United States, the Boeing Airplane Corporation, Dayton-Wright Airplane Company, the Fisher Body Corporation, and the Standard Aircraft Corporation produced the DH-4 with the Liberty L-12 engine for the American air services. A total of 9,500 DH-4s were ordered from American manufacturers, of which 1,885 actually reached France during the war.[1]

After the war a number of firms, most significantly Boeing, were contracted by the US Army to re-manufacture surplus DH-4s to DH-4B standard. Known by Boeing as the Model 16, deliveries of 111 aircraft from this manufacturer took place between March and July 1920, with 50 of them returned for further refurbishments three years later.[7]

In 1923, the Army ordered a new DH-4 variant from Boeing, distinguished by a fuselage of fabric-covered steel tube in place of the original plywood structure. These three prototypes were designated DH-4M-1 (M for modernized) and were ordered into production alongside the generally similar DH-4M-2 developed by Atlantic Aircraft. A total of 22 of the 163 DH-4M-1s were converted by the Army into dual-control trainers (DH-4M-1T) and a few more into target tugs (DH-4M-1K). Thirty of the aircraft ordered by the Army were diverted to the Navy for Marine Corps use, these designated O2B-1 for the base model, and O2B-2 for aircraft equipped for night and cross-country flying.[8]

The DH.4 entered service with the RFC in January 1917, first being used by No. 55 Squadron.[3] More squadrons were equipped with the type to increase the bombing capacity of the RFC, with two squadrons re-equipping in May, and a total of six squadrons by the end of the year.[3] As well as the RFC, the RNAS also used the DH.4, both over France and over Italy and the Aegean front.[3] The DH.4 was also used for coastal patrols by the RNAS, one, crewed by the pilot Major Egbert Cadbury and Captain Robert Leckie (later Air Vice-Marshal) as gunner shot down Zeppelin L70 on 5 August 1918.[9] Four RNAS DH.4 were credited with sinking the German U-boat UB 12 on 19 August 1918.[9]

The DH.4 proved a huge success and was often considered the best single-engined bomber of the First World War.[N 1] Even when fully loaded with bombs, with its reliability and impressive performance, the type proved highly popular with its crews. The Airco DH.4 was easy to fly, and especially when fitted with the Rolls-Royce Eagle engine, its speed and altitude performance gave it a good deal of invulnerability to German fighter interception,[11] so that the D.H.4 often did not require a fighter escort on missions - a concept furthered by de Havilland in the later Mosquito in the Second World War. One design drawback was the distance between pilot and observer, caused by the fuel tank placed between the pilot and observer, making communication between the crew members difficult, and therefore making the aircraft vulnerable if it was caught by enemy fighters.[12] There was some controversy (especially in American service) that this placement of the fuel tank was inherently unsafe.[13] In fact most contemporary aircraft were prone to catching fire in the air.[N 2]The fire hazard was reduced, however, when the pressurised fuel system was replaced by one using wind driven fuel pumps late in 1917,[12] although this was not initially adopted by American built aircraft.[15] In any case, the arrangement of fuel tank and cockpits was rectified in the otherwise inferior D.H.9.

Despite its success, numbers in service with the RFC actually started to decline from spring 1918, mainly due to a shortage of engines, and production switched to the D.H.9, which turned out to be disappointing, being inferior to the D.H.4 in most respects. It was left to the further developed D.H.9A, with the American Liberty engine, to satisfactorily replace the D.H.4.

When the Independent Air Force was set up in June 1918 to carry out strategic bombing of targets in Germany, the DH.4s of 55 Squadron formed part of it, being used for daylight attacks.[4] 55 Squadron developed tactics of flying in wedge formations, bombing on the leader's command and with the massed defensive fire of the formation deterring attacks by enemy fighters.[16] Despite heavy losses, 55 Squadron continued in operation, the only one of the day bombing squadrons in the Independent Force which did not have to temporarily stand down owing to aircrew losses.[17]

After the Armistice, the RAF formed No. 2 Communication Squadron, equipped with DH.4s to carry important passengers to and from the Paris Peace Conference. Several of the DH.4s used for this purpose were modified with an enclosed cabin for two passengers at the request of Andrew Bonar Law.[18] These aircraft were designated DH.4A, with at least seven being converted for the RAF, and a further nine for civil use.[19]

At the time of its entry into the war, the United States Army Air Service lacked any aircraft suitable for front line combat. They therefore procured various aircraft from the British and French, one being the DH.4. As the DH-4, it was manufactured mostly by Dayton-Wright and Fisher Body for service with the United States from 1918, the first American built DH-4 being delivered to France in May 1918, with combat operations commencing in August 1918.[20] The powerplant was a Liberty L-12 of 400 hp (300 kW) and it was fitted with two .30 in (7.62 mm) Marlin machine guns in the nose and two .30 in (7.62 mm) Lewis guns in the rear and could carry 322 lb (146 kg) of bombs. it could also be equipped with various radios like the SCR-68 for artillery spotting missions. The heavier engine reduced performance a little compared with the Rolls-Royce powered version, but as the "Liberty Plane" it became the Americans' standard general purpose two-seater, and on the whole was fairly popular with its crews. 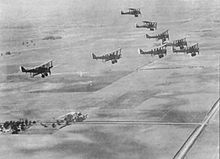 A formation of DH-4s in flight.

Aircrew operating the DH-4 were awarded four of the six Medals of Honor awarded to American aviators, with First Lieutenant Harold Ernest Goettler and Second Lieutenant Erwin R. Bleckley receiving posthumous awards after being killed on 12 October 1918 attempting to drop supplies to the Lost Battalion of the 77th Division, cut off by German troops during the Meuse-Argonne Offensive,[20] while Second Lieutenant Ralph Talbot and Gunnery Sergeant Robert G. Robinson of the US Marines were awarded the Medal of Honor for beating off attacks from 12 German fighters during a bombing raid over Belgium on 8 October 1918.[21][22] The type flew with 13 U.S. squadrons by the end of 1918.[23]

Following the end of the First World War, America had a large surplus of DH-4s, with the improved DH-4B becoming available, although none had been shipped to France. It was therefore decided that there was no point in returning aircraft across the Atlantic, so those remaining in France, together with other obsolete observation and trainer aircraft were burned in what became known as the "Billion Dollar Bonfire".[24] With limited funds available to develop and purchase replacements, the remaining DH-4s formed a major part of American air strength for several years, using them for many roles, with as many as 60 variants produced.[25] DH-4s were also widely used for experimental flying, being used as engine testbeds and fitted with new wings. They were used for the first trials of air-to-air refueling on 25 June 1923, and carried out an endurance flight of 37 hours, 15 minutes on 27–28 August, being refueled 16 times and setting 16 new world records for distance, speed and duration.[26] The DH-4 remained in service with the United States Army until 1932.[27]

DH-4s were also used by the United States Navy and Marine Corps, both during the First World War and postwar. The Navy and Marines received 51 DH-4s during the First World War, followed by 172 DH-4B and DH-4B-1 aircraft postwar and 30 DH-4M-1s with welded steel-tube fuselages (redesignated O2B) in 1925.[28] They remained in service with the Marines until 1929, being used against rebel factions in Nicaragua in 1927.[28] The US Navy converted some DH-4M-1s into primitive air ambulances which could carry one stretcher causality in an enclosed area behind the pilot.[29]

DH.4s were also used by the Australian airline QANTAS, flying its first airmail service in 1922.[33] Twelve DH.4s forming part of the Imperial Gift to Canada were used for forestry patrol and survey work, spotting hundreds of forest fires and helping to save millions of dollars worth of timber, with the last example finally being withdrawn in 1927.[34]

The U.S. Post Office also adopted the DH-4 to carry airmail.[35] In 1919, the DH-4B was standardised by the US Post Office, being modified to be flown from the rear cockpit with a 400 lb (180 kg) watertight mail compartment replacing the forward cockpit. The airmail DH-4B were later modified with revised landing gear and an enlarged rudder.[36] DH-4s were used to establish a coast-to-coast, transcontinental airmail service, between San Francisco and New York, a distance of 2,680 mi (4,310 km), involving night flight, the first services starting on 21 August 1924.[35] The DH-4 continued in Post Office service until 1927, when the last airmail routes were passed to private contractors.

XCO-8
Was a designation of one Atlantic DH.4M-2 fitted with Loening COA-1 wings and powered by a Liberty 12A engine.

The DH-4B on display at the National Museum of the United States Air Force.