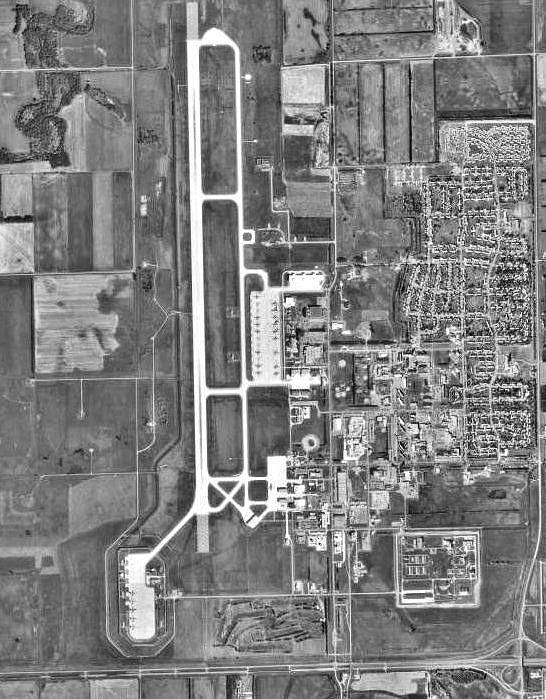 It is the home of the (319 ARW), which consists of the aircraft under the (AMC).

Due to the continuance of the between the U.S. and the , Grand Forks AFB was originally built as an (ADC) fighter-interceptor air base. The site for the base was chosen in 1954 and the land was paid for by the citizens of Grand Forks, the site was located convert|15|mi|km west of the city. The beginning of the convert|5400|acre|km2|sing=on air base started in 1956 with the construction of a convert|12300|ft|m|sing=on runway. In 1957, the air base brought the 478th Fighter Group into service. Between 1957 and 1959, the Grand Forks Air Defense Sector of and SAGE became operational, which was able to cover three U.S. states and one Canadian province.

In 1962, GFAFB accepted the 30th Bombardment Squadron with B-52Gs from , and incorporated it into the 4133d Strategic Wing. In 1963, the 319th Bombardment Wing (319 BW) activated, replacing the inactived 4133rd Strategic Wing. In the same year, the Grand Forks Air Defense Sector and the 478th Fighter Wing were also deactivated, as the base's host switched to the (SAC). The 321st Strategic Missile Wing (321 SMW) was also established in November 1963 as the first II intercontinental ballistic missile wing in SAC. In 1971, the 18th Fighter-Interceptor Squadron was inactivated and the 460th Fighter-Interceptor Squadron replaced the unit. The 804th Combat Support group was soon inactivated in 1972, and in 1973 the upgrade of the missiles to 321 SMW was completed. In 1974, although the 460th Fighter-Interceptor Squadron won first place at the William Tell Air-to-Air Competition at , Florida, it was inactivated due to the restructuring of the air defense system.

The next decade would bring some of the biggest changes to GFAFB. In 1991, the 42nd Air Division was inactivated. SAC was officially inactivated on , , and the base initially became part of the newly established (ACC). The base was later transferred to the new (AMC) in 1994 following the departure of the last [B-1B] aircraft, redesignation of the 319 BW as the (319 ARW) and associated transfer of aircraft assets to AMC, and transfer of strategic ICBM assets to (AFSPC). The 321 SMW was downgraded to a missile group in early 1995 and inactivated entirely in 1998. GFAFB's first ICBM silo was imploded in accordance with the Strategic Arms Reduction Treaty (START II) in 1999 and the last silo imploded in 2001. [http://en.wikipedia.org/wiki/321st_Air_Expeditionary_Wing]

In May 2005, DoD recommended to the BRAC commission that GFAFB should be realigned. This would prevent the base from being closed, but would result in a significant loss in personnel levels as well as a loss of the tanker mission. To make up for these losses, the Air Force has proposed that a new family of (UAV) missions be located at the base as well as "emerging missions" in . Also, there have been some signs that the tanker mission might be retained with a new fleet of planes replacing the older ones.

There were 1,279 households out of which 77.3% had children under the age of 18 living with them, 88.5% were married couples living together, 4.1% had a female householder with no husband present, and 3.8% were non-families. 3.0% of all households were made up of individuals and none had someone living alone who was 65 years of age or older. The average household size was 3.41 and the average family size was 3.48.