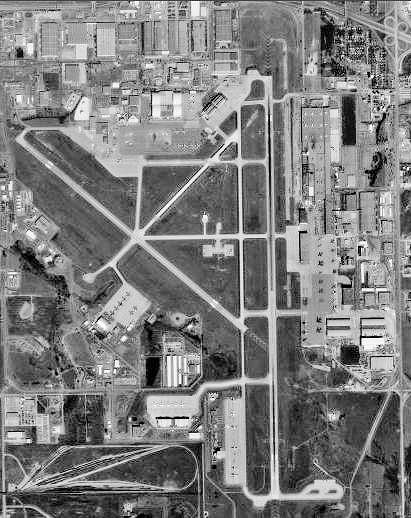 Tinker Air Force Base Airport codes|TIK|KTIK is a major base located in the southeast area, near the suburb of , . The base has more than 26,000 military and civilian employees and is the largest single-site employer in the state of Oklahoma. The installation covers approx. 9 square miles and has 760 buildings with a building floor space of over convert|15200000|sqft|m2.Fact|date=April 2008

Tinker is the headquarters of the 's () Oklahoma City Air Logistics Center (OC-ALC) (FHZ), which is the worldwide manager for a wide range of aircraft, engines, missiles, software and avionics and accessories components. The commander of OC-ALG is [http://www.tinker.af.mil/library/biographies/bio_print.asp?bioID=9872&page=1 Major General Loren M. Reno] . It is one of three Air Force ALCs, the others being Ogden Air Logistics Center (OO-ALC) at , Utah and Warner-Robins Air Logistics Center (WR-ALC) at , Georgia.

The host unit at Tinker is the (72 ABW) which provides services and support for the and its tenant organizations. The Wing and Installation Commander of Tinker Air Force Base is [http://www.tinker.af.mil/library/biographies/bio.asp?id=9088 Colonel Allen Jamerson] .

The (507 ARW) of the ( () is one of two flying units in the state of Oklahoma. The 507 ARW is opertionally gaied by (), but normally reports to (4 AF) and supports AMC's airlift and air refueling requirements.

The 507th consists of four subordinate groups, 15 squadrons and five flights, employing approximately 1,155 men and women. Approximately 184 members of the 507th are Air Reserve Technicians (ARTs) who serve as a full-time support cadre along with 20 traditional civilian employees. Approximately 350 additional reservists serve with the (931 ARG), a subordinate unit of the 507 ARW, that provides direct support to the Air Mobility Command's at , Kansas.

The (137 ARW) flies the KC-135R in conjunction with the 507th Air Refueling Wing, having assumed an aerial refueling mission in 2008. The 137 ARW traces its origins to the 137th Fighter Group, founded on 21 November 1946 at Norman, Oklahoma and receiving its Federal recognition on 18 December 1947. In April 1949, a tornado struck the base at Norman. The damage was considered too extensive for economical repair and the decision was made to move the 137th to the present facility at in Oklahoma City. An Air National Guard Station (AGS) was constructed and the move accomplished on 6 September 1949.

The 137th began as the 185th Fighter Squadron, with the P-51 Mustang. Afterwards, a variety of aircraft have been assigned to the wing, including the F-80 Shooting Star and F-86 Sabre Jet. Subsequently renamed as a Troop Carrier Group, Tactical Airlift Group, Airlift Group and Airlift Wing, the 137th later flew the C-97 Stratocruiser, C-124 Globemaster, and C-130 Hercules, having flown the latter from 1974 to 2007. Its previous C-130H models replaced older versions of the Hercules and were received directly from the factory, becoming the first ANG unit to receive brand new aircraft.

In its 2005 BRAC Recommendations, DoD recommended to realign Will Rogers AGS by relocating the 137th Airlift Wing (ANG) to Tinker AFB, redesignating it as an air refueling wing and associating it with the Air Force Reserve's 507th Air Refueling Wing while redistributing its C-130H aircraft to other ANG airlift wings.

Strategic Communications () Wing ONE is a one-of-a kind aviation unit in the U.S. Navy. STRATCOMWING ONE provides a vital, secure communications link to the designed to be used in the event of nuclear war or other major conflict or incident in order to maintain communications between the decision makers comprising the (NCA) and the triad of US strategic nuclear weapon delivery systems, i.e., manned bombers, land-based s (ICBMs) and s (SLBMs). Also known as the mission for "Take Charge and Move Out," STRATCOMWING ONE operates the Navy's aircraft in two operational squadrons and F aircraft bailed from USAF in a third training squadron. STRATCOMWING ONE's primary mission is to receive, verify and retransmit Emergency Action Messages (EAMs) to US strategic forces. With the retirement of the USAF airframe, upgraded with the Airborne Launch Control System (ALCS) have also assumed the airborne command post mission for the (USSTRATCOM). OC-ALC airframe artisans perform depot work on the Navy's aircraft, which are based on the airframe. The wing's Navy sailors perform organizational and field level maintenance work, with the former being integrated at the flying squadron level while the latter is performed at the wing's aircraft intermediate maintenance department (AIMD) level. The wing also operates alert facilities for E-6B aircraft at , California and , Maryland. STRATCOMWING ONE's subordinate squadrons include:
* Fleet Air Reconnaissance Squadron THREE (VQ-3) (E-6B)
* Fleet Air Reconnaissance Squadron FOUR (VQ-4) (E-6B)
* Fleet Air Reconnaissance Squadron SEVEN (VQ-7) (EC-18F) []

*The 38th Engineering Installation Group has worldwide responsibility for engineering and installation of all communications and electronic facilities for the Air Force.
*The 3rd Combat Communications Group (ACC), colloquially known as the "Third Herd", provides deployable communications, computer systems, navigational aids and air traffic control services anywhere in the world.
*Defense Mega Center Oklahoma City is the local branch of the . The Mega center operates computer systems for the base and serves 110 other bases in 46 states.
*Defense Distribution Depot Oklahoma provides the receipt, storage, issue, inspection and shipment of material, including material quality control, preservation and packaging, inventory, transportation functions and pick up and delivery services in support of OC-ALC and other Tinker-based organizations.

Tinker Air Force Base is named in honor of (1887–1942). From and part Osage Indian, General Tinker received his wings in 1921. General Tinker was a graduate of who went on to become the first Major General of American Indian descent in U.S. Army history.

In 1926 he was awarded the for returning to his blazing aircraft to rescue a fellow officer. On , he led a flight of Liberators on a long-range strike against Japanese forces on during World War II. General Tinker was killed when his aircraft presumably crashed into the sea. At the time of his death, General Tinker was commander of the -based .

The base was renamed in his honor on .

In 1940, the War Department was considering the central as a location for a supply and maintenance depot. Oklahoma City leaders offered a convert|480|acre|km2|sing=on site and acquired an option for convert|960|acre|km2 additional land. On , , the order was officially signed awarding the depot to Oklahoma City.

Tinker Field was the site of a factory producing approximately half of the s used in . The site also produced a number of s. Production ceased in 1945.

The first successful forecast in history was issued on , from Tinker, about three hours before the tornado hit the southeast corner of the base. A granite marker in the Heritage Airpark on the base commemorates the event.

On , , and recorded "An Empty Cup", "Rock Me My Baby", "You've Got Love", and "Maybe Baby" in the Tinker Air Force Base Officer's Club. [http://www.youtube.com/watch?v=xni1qJOOfZE]

On , , a massive fire that burned for two days destroyed or damaged over convert|700000|sqft|m2 in the Air Logistics Center, Building 3001. The resulting repairs cost $63.5 million.

During much of the 1990s, Tinker was home to the Automated Weather Network switching facility, which consolidated all U.S. military weather data worldwide. Originally located at , this unit was later moved to an facility at .

In the late 1990s Tinker became home to the Navy's "Take Charge and Move Out" (TACAMO) wing, which provides maintenance, security, operations, administration, training and logistic support for the Navy's E-6B Mercury aircraft fleet. TACAMO [http://www.tacamo.navy.mil] was the first Navy Air Wing fully integrated on an Air Force base, carrying out a Navy mission in joint operations.

On , , a deadly tornado caused extensive damage to the northwest corner of the base and surrounding communities. [ [http://www.srh.noaa.gov/oun/storms/19990503/bigoutbreak.html Tornado Track Map for the May 3, 1999 Tornado Outbreak in Central Oklahoma ] ] For many days afterwards, Tinker personnel helped by providing shelters, search and rescue, and clean-up efforts.

In July 2005, Tinker hosted the as part of their Star Spangled Salute, the base's annual Independence Day celebration.

The Oklahoma Maintenance, Repair & Overhaul Technology Center (MROTC) is a public/private partnership, managed by Battelle Oklahoma, owned by Oklahoma Industries Authority (OIA), and partners with the Department of Defense to provide a national center for technical solutions to aging commercial and military aircraft. The MROTC ( [http://www.aeroeoc.com] ) is a 370-acre world-class MRO facility, on the south east site of Tinker AFB, sharing runways and security with the base.

Tinker celebrated the 30-year anniversary of the from to . Past and present airmen were invited to swap stories and learn about the latest upgrades. [ [http://www.af.mil/news/story.asp?storyID=123059395 Airmen Honor 30 years of AWACS] ]

On , , Oklahoma County voters voted in favor of $71.5 million in general obligation bonds, the majority of which will be used to purchase the former plant which is located on the south west section of the base, next to the runway. The 3.8 million square foot (353,000 m²) facility and surrounding acreage would be leased to the Air Force. Tinker officials said they would use the facility to create Tinker Aerospace Complex, which would host some current 76th Maintenance Wing operations as well as other Department of Defense missions, including work on the C-17 engines, joint strike fighter engines and core work on the new tanker. The Air Force would occupy about 2/3 of the facility with work currently being done in 69 separate facilities on base, many of which are World War II-era temporary buildings located in runway clear zones. Private contractors will also be given the opportunity to leased space as needed for military contracts. [http://www.forbes.com/afxnewslimited/feeds/afx/2008/03/11/afx4759053.html] . Tinker officials agreed to buy the plant for $55 million, and will get access to the plant in September 2008. [http://newsok.com/update-gm-plant-purchase-for-tinker/article/3256249/?tm=1213248604 GM plant purchase for Tinker]

Much of this text in an early version of this article was taken from pages on the [http://www.tinker.af.mil Tinker Air Force Base Website] , which as a work of the U.S. Government is presumed to be a . That information was supplemented by: