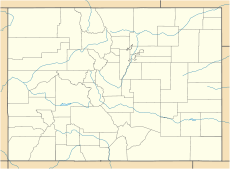 Peterson Air Force Base (IATA: COS, ICAO: KCOS, FAA LID: COS) is a base of the United States Air Force located at Colorado Springs in El Paso County, Colorado, United States and it provides runways for the adjacent City of Colorado Springs Municipal Airport under a shared joint civil-military airport arrangement. It was named in honor of 1st Lt Edward Joseph Peterson who was killed in a crash at the base.

On 28 July 2006, operations formerly conducted in Cheyenne Mountain, Colorado by the North American Aerospace Defense Command (NORAD) were relocated to Peterson Air Force Base for purposes of efficiency. The Cheyenne Mountain Complex will be left on warm standby until the protection of the mountain is again required. NORAD officials no longer feel there is a threat of an intercontinental nuclear attack which could disrupt NORAD's operations.[2]

Then, after only a few weeks, a tragedy occurred that would indelibly affect the base. On 8 August 1942, First Lieutenant Edward J. Peterson, Operations Officer for the 14th Photo Reconnaissance Squadron and a native of Colorado, crashed while attempting to take off from the airfield when the left engine of his twin engine F-4 (a reconnaissance variant of the P-38 Lightning) failed. A base fire department crew rescued Lt Peterson from the burning wreckage. Unfortunately, Lt Peterson sustained significant burns and died at Penrose hospital that afternoon, thereby becoming the first Coloradan killed in a flying accident at the airfield. Consequently, on 13 December 1942, officials changed the name of the Colorado Springs Army Air Base to Peterson Army Air Base in honor of the fallen airman.[6]

The base assumed a new mission in the spring of 1943, that of heavy bomber combat crew training. The 214th Combat Crew Training School conducted the training, utilizing the B-24 Liberator. From 5 March to 1 October 1943, “Peterson Field,” as the base was commonly called, was assigned to the Third Air Force, headquartered at Greenville Army Air Base, South Carolina. Control of Peterson Field later reverted to the Second Air Force. In June 1944, the mission at the base once again changed, this time to fighter pilot training. The 72d Fighter Wing, assigned to the base, employed P-40 Warhawks to carry out this mission.

In April 1945, Peterson Field was assigned to Continental Air Forces. The location of the Army Air Forces Instructors School at the base signaled another mission change. On 31 December 1945, the Army inactivated the base, turning the property over to the City of Colorado Springs.

The legacy of Peterson Field and the military presence in Colorado Springs took a significant turn in September 1947, following the birth of the United States Air Force. Soon after its inception, the fledgling service twice reactivated the base from 29 September 1947 to 15 January 1948 and again from 22 September 1948 into 1949. During the latter period, the base served as an airfield for Headquarters, Fifteenth Air Force which had been temporarily located in Colorado Springs. Peterson Field inactivated again when Fifteenth Air Force moved to March Air Force Base in 1949.

The Air Force activated Peterson Field once more as a joint civil-military airport following the January 1951 establishment of Air Defense Command at nearby Ent AFB, located in downtown Colorado Springs. The 4600th Air Base Group activated simultaneously on 1 January 1951 and provided support for the newly established command. In 1958, the 4600th achieved wing status and was designated as the 4600th Air Base Wing. Subsequently, on 1 April 1975, the Air Force redesignated the wing as the 46th Aerospace Defense Wing. One year later, on 1 March 1976, Peterson Field was renamed Peterson Air Force Base while still retaining its joint civil-military status with the City of Colorado Springs Municipal Airport.[6]