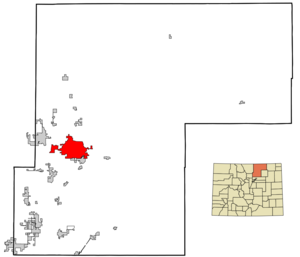 mapsize = 250x200px
map_caption = Location in Weld County and the

The City of Greeley is a Home Rule Municipality that is the and the most populous city of Weld County, , .GR|6 Greeley is situated convert|49|mi|km|0|sp=us of the in Denver. According to 2006 Census Bureau estimates, the population of the city is 87,596.

Greeley is bordered on the south by the towns of Evans and Garden City, and the three together are often collectively (although incorrectly) referred to as "Greeley." The Greeley/Evans area is bounded on the south by the , and the flows through north Greeley. The intersection of U.S. Highways 85 and 34 is often cited as the location of Greeley, although the actual point of intersection lies within the city limits of Evans. Greeley contains the western terminus of State Highway 263 and borders State Highway 392 on the north.

There were 27,647 households out of which 33.1% had children under the age of 18 living with them, 48.7% were married couples living together, 10.8% had a female householder with no husband present, and 36.0% were non-families. 25.6% of all households were made up of individuals and 8.3% had someone living alone who was 65 years of age or older. The average household size was 2.63 and the average family size was 3.19.

Greeley is located in (or just west of) the area previously occupied by the Overland Trail station of Latham (originally called the Cherokee City Station). The Latham station (also known as Fort Latham) was built in 1862 and named in honor of Milton S. Latham, one of California's early senators. The stagecoach station was at the confluence of the South Platte River and the Cache la Poudre River. The web site www.Over-Land.com describes it as "probably the most important and busiest facility on the Overland Trail" (since it was a river crossing and a junction point for the spur of the Trail south to Denver). It is believed that here occurred the birth of the born in Colorado, a girl. Fort Latham was the headquarters of the government troops during the Indian troubles of 1860-64 and the county seat (the post office being called Latham).

Greeley began as the Union Colony, which was founded in 1869 as an experimental utopian community of "high moral standards" by , a newspaper reporter from . Meeker purchased a site at the confluence of the Cache la Poudre and South Platte Rivers (that included the area of Latham, an Overland Trail station), halfway between Cheyenne and Denver along the tracks of the formerly known as the "Island Grove Ranch." The name Union Colony was later changed to Greeley in honor of , who was Meeker's editor at the , and popularized the phrase "Go West, young man".

attended Colorado State College of Education, now the , from 1936-1937. He was a Social Science educator at the Training School and at the College from 1936-1941. He conceived the idea for his novel during his stay in Greeley.

ian studied at the Colorado State College of Education in 1949. In "The America I Have Seen" (1951), he portrays Greeley as a hotbed of debauchery, rife with "naked legs" and "animal-like" mixing of the sexes.

(1993). The snowiest month in Greeley is usually March, but the heaviest single-storm snowfalls occur in the autumn months. Greeley residents can expect a two-foot snowstorm approximately once every 10 to 15 years, with the most recent occurring in December 2006.

High temperatures are generally around 90°F (32°C) in the summer and 40°F (4°C) in the winter, although there is significant variation. The hottest days generally occur around the third week of July and the coldest in January. Nighttime lows are near 60°F (16°C) in the summer and around 15°F (-9°C) in the winter. Record high temperatures of 104°F (40°C) have been recorded, as have record low temperatures of -25°F (-32°C). The first freeze typically occurs around and the last can be as late as . s which disrupt the weather for the eastern two-thirds of the US often originate in or near Colorado, which means Greeley does not experience many fully developed storm systems. Warm fronts, sleet, and freezing rain are practically non-existent here. In addition, the city's proximity to the and low elevation compared to the surrounding terrain result in less precipitation and fewer s and es than areas immediately adjacent. This is paradoxical, because adjacent areas (mostly farmland) experience between 7 and 9 days per year and one of the highest concentrations of tornadic activity anywhere. The area where Colorado, Nebraska and Wyoming meet receives the most hail of any location in the United States [ [http://www.ucar.edu/communications/factsheets/Hail.html UCAR: Hail] ] .

Some days in the winter and spring can be warm and extremely dry, with s often raising temperatures to near 70°F (21°C) in January and February, and sometimes to near 90°F (32°C) in April. Greeley's low year-round humidity means that nighttime low temperatures are practically never above 68°F (20°C), even in the very hottest part of the summer. The diurnal temperature range is usually rather wide, with a 50-degree (Fahrenheit) difference between daytime high and nighttime low not uncommon, especially in the spring and fall months. Rapid fluctuation in temperature is also common – a sunny 80°F (27°C) October afternoon can easily give way to a 28°F (-2°C) blizzard within 12 hours.

Greeley is also home to and the .

Greeley in the news

Greeley was featured in the books and by .

*The & the UCAR Office of Programs. Website. http://www.ucar.edu/ Retrieved ,