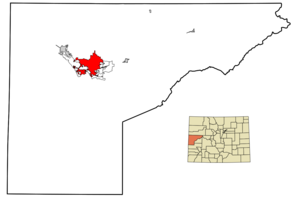 mapsize = 250px
map_caption = Location in Mesa County and the

The City of Grand Junction is a Home Rule Municipality that is the and the most populous city of Mesa County, , .GR|6 Grand Junction is situated convert|197|mi|km|0|sp=us of the in Denver. According to 2006 Census Bureau estimates, the population of the city is 45,299.

The city is located along the north side of the Colorado River, where it receives the from south. The name "Grand" refers to the historical name of the upper Colorado River until renamed in 1921, and the word 'junction' is from the joining of the Colorado and Gunnison rivers. The city sits near the mid-point of a 30-mile (48 km) arcing valley, known as the Grand Valley, a major -growing region, historically home to the Ute people and settled by white farmers in the 1880s. In recent years, several wineries have been established in the area as well. The , a series of canyons and mesas similar to the overlook the city, while most of the area is surrounded by public lands managed by the . Interstate 70 connects the city eastward to Glenwood Springs and Denver.

There were 17,865 households out of which 25.5% had children under the age of 18 living with them, 46.1% were married couples living together, 9.4% had a female householder with no husband present, and 41.0% were non-families. 33.2% of all households were made up of individuals and 13.8% had someone living alone who was 65 years of age or older. The average household size was 2.23 and the average family size was 2.84.

The population figures are for Grand Junction only; the city abuts smaller towns and unincorporated county areas which contribute to area commerce.

Since settlers arrived in the 1880s until the 1960s, the main economic activity in the region was farming and cattle. Vast reserves were known to exist near in the . The oil embargoes of the 1970s and high gas prices resulted in major financial interest in the region. Exxon purchased rights and used Grand Junction as its seat of operations.

Grand Junction and the surrounding Grand Valley were prosperous in the 1970s and early 1980s largely because of . The United States, western Colorado in particular, has the largest known concentration of oil shale in the world, (according to the Bureau of Land Management) and holds an estimated 800 gigabarrels of recoverable oil, enough to meet U.S. demand for oil at current levels for 110 years. Known as the "Rock That Burns" the shale can be mined and processed to produce oil, although in the past it was significantly more expensive than conventional oil. Sustained prices above $95 per barrel, however, may make extraction economically attractive in the coming years. ExxonMobil was forced to pull out of the region because of lower oil prices, which led to economic hardship in the region.

The economic bust known as "Black Sunday" (, ) to the locals started with a phone call from the President of Exxon to the then stating that Exxon would cut its losses while retaining mining rights to the (then and currently) uneconomic oil. The economic bust was felt state wide, as Exxon had invested more than 5 billion USD in the state. Colorado historian observed "I think that was a definite turning point, and it was a reminder that we were a boom-and-bust state...There were parallels to the silver crash of 1893."

Today the economy of Grand Junction is more diverse and stable than it has been in the last 40 years. Currently, major contributors are health care, tourism, agriculture, livestock, and service. Major oil companies have once again invested large amounts of money recently (within the last two years), due to recent increases in oil and natural gas prices.

Grand Junction is being discovered by the "nation's elite business and leisure travelers," according to Cleveland-based Flight Options, a private jet service that named Grand Junction as one of its clients' top ten destinations during December 2007, citing nearby as an attraction. [ [http://denver.bizjournals.com/denver/stories/2008/01/07/daily57.html "Colo. gets two spots on luxury-travel list"] . - "Denver Business Journal". - , . - Retrieved 2008-01-12]

(formerly Walker Field Airport) serves as the major airport in the area. The airport is located in north Grand Junction on Horizon Drive. Two-way flights to Denver, Salt Lake City, Las Vegas, Dallas and Phoenix are available for air travelers.

, the national passenger rail system, provides service to Grand Junction Station, operating its daily in both directions between Chicago and across the bay from .

Overall, the area has a continental climate.

*Spring & Fall: prolonged spring marked by much blossoming and the fall is very colourful.

*Summer: Usually warm and dry. The all-time record high temperature, set on , is 106 Degrees (41°C). Average highs in the mid to high 90s°F (near 35°C); average lows in the high 60s to low 70s (near 19°C), although average temperatures have been increasing recently. Precipitation events are uncommon before the monsoon, after that thunderstorms are common.