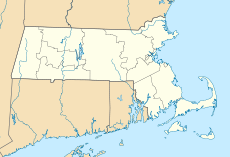 Otis Air National Guard Base (IATA: FMH, ICAO: KFMH, FAA LID: FMH) is an Air National Guard installation located within the Massachusetts Military Reservation (MMR), a military training facility, located on the western portion of Cape Cod, in western Barnstable County, Massachusetts, United States. It was previously known as Otis Air Force Base prior to its transfer from the active duty Air Force to the Air National Guard. In the community, it is also known as Otis Air Base or more commonly by its old name, Otis Air Force Base. It was named in honor of pilot and Boston surgeon, Lt. Frank "Jesse" Otis. 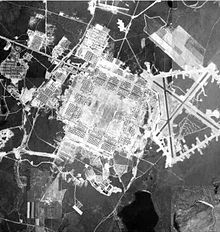 According to the 102d Intelligence Wing Public Affairs office, Otis Air National Guard Base is named for pilot, flight surgeon, and eminent Boston City Hospital surgeon, Lt. Frank "Jesse" Otis, a member of the 101st Observation Squadron who was killed on Jan. 11, 1937 when his Douglas O-46A crashed while on a cross-country training mission.

In 1938, the landing field area at Camp Edwards was named Otis Field in memory of the Boston flying physician. Ten years later the base was renamed Otis Air Force Base in his honor. Until 1973, it was the largest Aerospace Defense Command base in the world and is the only base named for a doctor.

During the Cold War, the base was a key Aerospace Defense Command (ADC) installation. Activities ranged from the Air Force's 33rd Fighter Wing (Air Defense) / 60th Fighter-Interceptor Squadron to the 551st Airborne Early Warning and Control Wing and the 4604th Support Squadron supporting the Texas Tower Radar Plaforms in the Atlantic Ocean.. The 551st flew the EC-121 Warning Star before moving to Hanscom Air Force Base in 1969. The 551st was also the first Air Force wing to fly the EC-121. The 33rd flew various fighter jets in conjunction with the 60th Fighter Interceptor Squadron. The expanding mission led to the runways being lengthened in 1960. The base was also home to the 26th Air Defense Missile Squadron, which maintained the BOMARC surface-to-air missiles on the base. The regular air force began leaving Otis in the late 1960s as improvements in radar made the 551st more costly when compared to newer technologies. The 551st and the 60th left Otis when the Air Force began to move the continental air defense mission over to the Air National Guard.

The Massachusetts Air National Guard's 102d Fighter Wing, 101st Fighter Squadron including its previous iterations as a fighter-interceptor group, fighter group, air defense wing and fighter-interceptor wing became the lead command at Otis for executing this mission. During the Cold War period from 1964 until 2004, the 102d operated a variety of air defense and tactical fighter aircraft, to include the F-86H Sabre, F-84B/F Thunderstreak, F-100D Super Sabre, F-106A/B Delta Dart and F-15A/B Eagle. The base was also utilized as a stopover for a French Air Force Mirage IV on the way to French Polynesia for Operation Tamoure.

The Air National Guard's and 101st Tactical Fighter Squadron used Otis when the active duty Air Force was present and shared missions with the 33rd Tactical Fighter Wing while operating their own aircraft as indicated in the previous paragraph regarding the Cold War. In 1987, the 102d Fighter Wing (102 FW) transitioned to the F-15C Eagle. Following 2005 Base Realignment and Closure (BRAC) action, the Massachusetts Air National Guard continued to retain an air defense mission, but the 102 FW was directed to transfer its F-15 aircraft to its sister unit, the 104th Fighter Wing, formerly an A-10 Thunderbolt II unit of the Massachusetts Air National Guard at Barnes Municipal Airport/ANGB. All F-15 aircraft were transferred by January 2008 and the 102 FW was redesignated as the 102d Intelligence Wing (102 IW), a non-flying unit at Otis ANGB.

During the 1950s, Otis had quite a few instances of UFOs being associated with it. One of these instances allegedly involved an F-94C Starfire which was said to have vanished along with its radar operator over the base. The pilot reportedly escaped.[2] The incident was mentioned on the History Channel. This alleged incident is controversial, and may never have actually occurred.

President John F. Kennedy used Otis on many occasions for the landing of Air Force One when he traveled to the Kennedy Compound in Hyannis. He would then board an Army or Marine Corps helicopter which would then take him to the compound. It was at the Otis AFB Hospital that his wife, Jacqueline, gave birth to their son Patrick Bouvier Kennedy, who died two days later.

In the early 1970s, Otis AFB was marked for closure as part of changing priorities and a nation-wide reduction of military bases in response to cost cutting efforts as the Vietnam War was winding down. In 1973, Governor of Massachusetts Frank Sargent appointed the Otis Task Force to oversee a phase-down of military activities at the Massachusetts Military Reservation (MMR). The major concern of Cape residents was the fate of base property and impacts on the local economy as military activities decreased.

During a period of time when the future of the base was in limbo, ideas were floated that would include the redeveloping of the base into a recreation center of sorts that would rival Disneyland.[3] The state even went so far as to mail out brochures to 1,500 corporations around the world, advertising the redevelopment opportunities of the base.[4]

Reopening of the Base

In 1977, Otis AFB was officially redistributed with the establishment of boundary lines which divided the complex into several installations, all within the confines of the original Otis AFB. Established was Otis Air National Guard Base, Camp Edwards (an Army National Guard small arms training facility that served as a POW camp during World War II), and Coast Guard Air Station Cape Cod (which utilizes the Otis ANGB runways). Together they form the Massachusetts Military Reservation, where 17 other state, federal and private entities operate within its boundaries.

Otis ANGB is technically an alternative landing site for the Space Shuttle orbiter if it ever had to abort its mission during liftoff.[citation needed] However, this is only possible if the orbiter is in a high inclination launch. The comparatively short main runway at Otis also makes its use for this purpose unlikely when compared to other nearby installations such as Westover Air Reserve Base or Pease Air National Guard Base, both former Strategic Air Command installations with runways over 2,000 feet longer than Otis.

On September 11, 2001, the Federal Aviation Administration (FAA)'s Boston Center contacted the base at 8:34 notifying them of the hijacking of American Airlines Flight 11. Lieutenant Colonel Timothy Duffy and Major Daniel Nash flew F-15 fighters out of the base heading toward New York City to intercept the plane. Conflicting reports say they departed somewhere between 8:46 and 8:52 and also at what speeds they flew (supersonic versus subsonic.)[5][6] In the 2006 TV documentary Flight 175: As the World Watched, both Otis pilots were interviewed and one spoke about their speed being supersonic in their effort to intercept the hijacked airliner headed for New York.

Originally scheduled to be closed by the 2005 BRAC, Otis ANGB was spared in last minute decisions. However, the 102nd Fighter Wing did lose its F-15 Eagle and transitioned to a non-flying mission, redesignated as the 102d Intelligence Wing. The only military aircraft currently based at Otis ANGB are those of the Coast Guard, although transient military aircraft continue to use the facility and the Navy has considered it as a place of interest should they decide to base naval forces again in the Northeast again.[7]

On November 6, 2009, ground was broken on new facilities for the 102nd Intelligence Wing.[8] The building will eventually replace the temporary facilities that the wing is now operating in.

The airport was a NASA Space Shuttle launch abort site.[9] It was only able to be used during high inclination launches.

On December 22, 2006 in an agreement amongst the Coast Guard, National Guard and the Commonwealth of Massachusetts a partnership was created in which the Coast Guard would assume control of the aviation facilities from the Air Force (Runways, taxiways, etc.) while the Air National Guard will manage the utilities (Electricity, water, sewerage, etc.) and the state will fund the emergency services and fire protection. The Federal Aviation Administration has released new flight procedures that identify the ICAO code KFMH with the name of Coast Guard Air Station Cape Cod.[10] This does not signify a name change as it has not been officially announced. The FAA sometimes does issue plans that call an airport a different name than is commonly known. With the control of the airfield changing hands, improvements to the lighting system were put in control of the Coast Guard.[11] The base is still known as Otis among locals, but the media reports it as Coast Guard Air Station Cape Cod.

Military operations in the early years at Otis AFB included the use of petroleum products and other hazardous materials such as fuels, motor oils, and cleaning solvents and the generation of associated wastes. Consistent with practices of other industries at the time, it was common practice for many years to dispose of such wastes in landfills, dry wells, sumps, and the sewage treatment plant. Spills and leaks also occurred. These activities have resulted in serious impacts to the Upper Cape’s groundwater resources. As a direct result of the threats from waste plumes in the groundwater, much of the water supply in the surrounding area was converted from wells to municipal water sources.

In towns near the Air Force's PAVE PAWS radar at Otis Air National Guard Base, there was significant concern about possible adverse effects on health of humans resulting from PAVE PAWS radiation. In 1978, the EPA and the US Air Force School of Medicine decided that no such threat to human health was plausible. At the request of local residents, in 1979, two panels formed by the National Research Council reviewed existing data on the radar and on comparable systems: an engineering panel and a biomedical panel. Neither panel found any cause for concern, but the panels did recommend additional studies. The local communities' concerns peaked again in the late 1990s, and another National Research Council panel studied not only previously available data, but also engineering measurements newly gathered by the Air Force, epidemiological data gathered by local public health authorities, and the results of studies on various other systems. The report of this latest NRC panel, issued in 2005, available from the National Academies Press both online and in hard copy, finds no evidence for adverse health effects from PAVE PAWS. There are nearby clusters of certain types of cancer, but as is often true in cluster studies, there are so many confounding effects that any possible effect due to PAVE PAWS is indiscernible. Further, no plausible causal link to PAVE PAWS on health of nearby residents has been discovered. Of scientific interest is the possibility that growth rates of vegetation close to the radar and exposed to the direct radar beam may possibly be retarded, but no plausible connection of that possibility to effects on human health is known.

Otis was unique because it had its own schools for the students who lived on the base. These schools included: