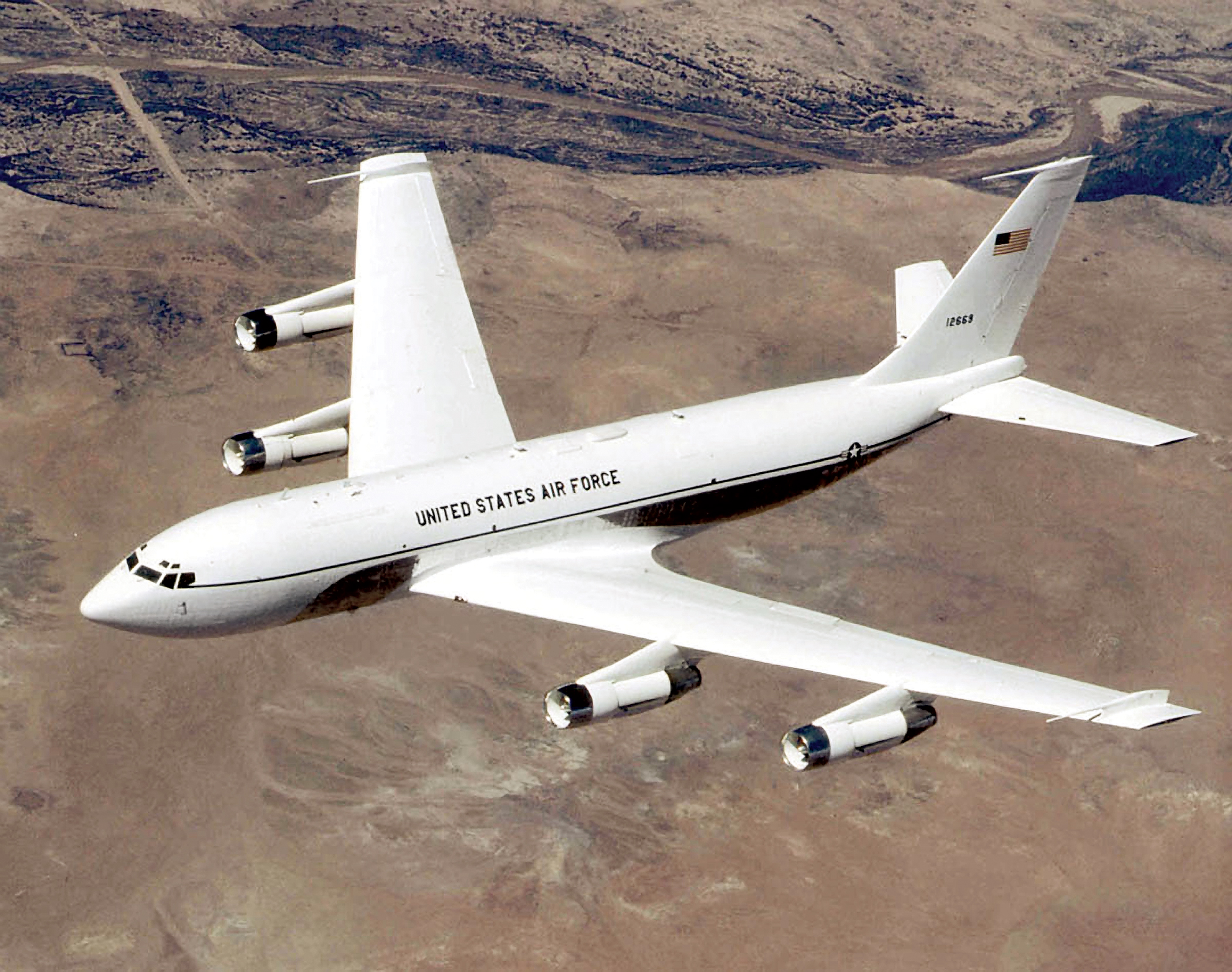 The C-135 Stratolifter is a transport aircraft derived from the prototype (also the basis for the 707) in the early 1950s. It has a narrower and is shorter than the 707. Boeing gave the aircraft the internal designation of Model 717. [ [http://www.boeing.com/news/frontiers/archive/2006/july/i_history.pdf "Historical Perspective, Start of a PROUD MISSION"] , "Boeing Frontiers", July 2006.] Since the first one was built in August 1956, the C-135 has been a visible fixture of the .

A large majority of the 820 units were developed as KC-135A Stratotankers for mid-air refueling. However, they have also performed numerous transport and special-duty functions. Forty-five base-model aircraft were built as C-135A or C-135B transports with the tanking equipment excluded.

Fifteen C-135As, powered by J57 s, were built. In later years, almost all were upgraded with TF33 engines and wide-span tail planes, and were re-designated C-135E. Later on most of the C-135Es were re-engined again, using the more powerful turbofan engine, the CFM-56-2A.

Thirty C-135Bs were built with the TF33 turbofans and wide-span tail planes from the start, and a small number remain in service in their original form. A number of these were modified for a weather reconnaissance (flying through radioactive clouds from nuclear tests or other agents) role and designated WC-135B.

The C-135C designation applies to three WC-135B weather reconnaissance aircraft, which reverted to transport status. Most of the other C-135Bs were converted to various special mission variants following their service with the .

Although most of the remaining C-135 aircraft are used for transporting senior military leaders and other high-ranking dignitaries, the C-135C communications aircraft serves as an aerial test-bed for emerging technologies. Developmental tests using this aircraft have demonstrated the capability to fly precision approaches using a local area differential system. This modified C-135 has been fitted with a camera and a to test the camera’s generation of video images of the forward scene in low-visibility conditions. The aircraft, which in the VIP/Distinguished Visitor (DV) transport role seats 14 passengers, also gives a Joint Forces Air Component Commander (JFACC) a limited ability to plan and control the simulated battle while in the air enroute to the crisis area.

Speckled Trout is the official name of a combined SAF/CSAF support mission and concurret test mission. It was also the official nickname given to a modified C-135C, AF Ser. No. 61-2669, that was used by the and the for executive transport requirements. Fully equipped with an array of communications equipment, data links and cryptographic sets, the aircraft served a secondary role as a testbed for proposed command and control systems and was also used to evaluate future transport aircraft design. The 412th Flight Test Squadron (412 FLTS) of the (AFMC) at , California operated the C-135 Speckled Trout airframe and managed its test mission.

The name "Speckled Trout" applies to both the organization and the aircraft. The name was chosen in honor of an early program monitor, Faye Trout, who assisted in numerous phases of the project. The word "speckled" was added because Trout apparently had "a lot of freckles."

Speckled Trout acquired the C-135C, AF Ser. No. 61-2669, in 1974 and retired the aircraft on 13 Jan 2006. An interim aircraft was in use for the Speckled Trout mission until the 2008 delivery of the current aircraft, a modified KC-135R Stratotanker with a more modern communications architecture testbed. The current KC-135R Speckled Trout also supports additional tests and air refueling requirements that the C-135C could not. [ [http://www.af.mil/news/story.asp?id=123016232 Air Force article on Speckled Trout retirement] ]

The C-135F were new-build aircraft used by as dual-role tanker/cargo and troop carrier aircraft.