Chelsea is a city in Suffolk County, Massachusetts, United States directly across the Mystic River from the city of Boston. It is the smallest city in Massachusetts in land area, and the 26th most densely populated incorporated place in the country.

The area was first called Winnisimmet, meaning "good spring nearby," by the Massachusett tribe which once lived here. It was settled in 1624 by Samuel Maverick, whose palisaded trading post is considered the first permanent settlement at Boston Harbor. In 1635, Maverick sold all of Winnisimmet, except for his house and farm, to Richard Bellingham. The community remained part of Boston until it was set off and incorporated in 1739, when it was named after Chelsea, a neighborhood in London.

In 1775, the Battle of Chelsea Creek was fought here, the second battle of the Revolution, at which American forces made one of their first captures of a British ship. Part of Washington's army was stationed here during the Siege of Boston.

Chelsea originally included North Chelsea—all of Revere, Winthrop and parts of Saugus. In 1846, North Chelsea was set off as a separate town. Reincorporated as a city in 1857, Chelsea developed as an industrial center, producing rubber and elastic goods, boots and shoes, stoves and adhesives. It became home to a naval hospital (designed by Alexander Parris) and soldiers' home. But on April 12, 1908, nearly half the city was destroyed in the First Great Chelsea Fire. In 1973, the Second Great Chelsea Fire burned 18 city blocks. 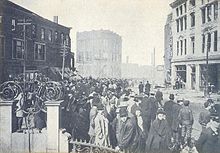 Chelsea Square looking north up Broadway after Great Fire of 1908

In September 1991, Massachusetts enacted special legislation to place Chelsea into receivership. Governor William Weld named James Carlin as the first receiver followed by Lewis "Harry" Spence. This was the first time since the Great Depression that a major United States municipality had such an action taken against it. Events preceding the action included failed financial intervention by the state, a political stalemate over the city's budget, deepening economic decline and a spiraling fiscal crisis. Fortunately, Chelsea had no publicly held long-term debt—thus, a solution to its problems could be explored in isolation of creditors.

A charter change in 1995 led by the receivership through a community process designed an efficient council-manager form of government, which has focused on improving the quality of service the city provides to its residents and businesses, while establishing financial policies that have significantly improved the city's financial condition. Increased emphasis on economic development and capital improvement has led to an influx of new business and homebuyers. In 1998, Chelsea was named winner of the All-America City Award. The community is home to a Carnegie library built in 1910.

The follows places in Chelsea are listed on the National Register of Historic Places:

According to the United States Census Bureau, Chelsea has a total area of 2.1 square miles (5.4 km2), of which, 1.8 square miles (4.7 km2) of it is land and 0.3 square miles (0.78 km2) of it (14%) is water. Located on a peninsula in Boston Harbor, Chelsea is drained by Chelsea Creek and sits on the Mystic River just North of downtown Boston.

Schools in Chelsea include:

Chelsea has four elementary schools, including one that is bilingual and two that require uniforms, three middle schools, and one high school. The Chelsea school system has historically been towards the bottom of the state's test score rankings. It's plagued by high mobility among students, meaning that a very high percentage of students move in or out over the course of the year, and the dropout rate is high. In 1988, the school board made the unprecedented move of delegating its authority for control of the school district to Boston University. In June 2008, the partnership with Boston University ended, and the schools returned to full local control. Chelsea also has only one private school, St. Rose of Lima, left as the others closed. It is located on Broadway near city hall and as of 2009, has an enrollment of about 350.