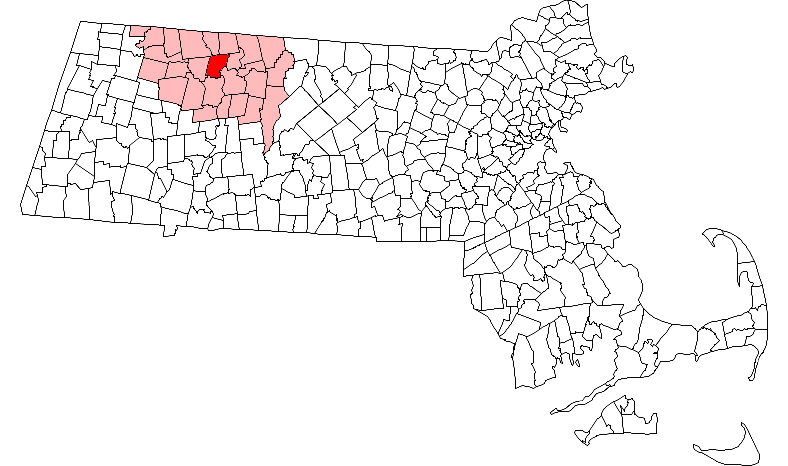 Greenfield is part of the Metropolitan Statistical Area.

Indians once made seasonal encampments in the area. They planted field crops and fished the rivers. First settled by the English in 1686 as part of Deerfield, it was attacked repeatedly by Indians, with the last skirmish in 1756. In 1753, Greenfield was set off and incorporated as a separate town, named for the Green River. It was the eastern terminus of the , a principal route for settlers traveling west into .

In 1795, the opened, allowing boats to to reach Greenfield via the Connecticut River, after bypassing the South Hadley falls Located at the confluence of the Deerfield and Green rivers, and not far from where they merge into the Connecticut River, Greenfield developed into a trade center. It was designated county seat when Franklin County was created from Hampshire County in 1811. Falls provided for industry, and Greenfield grew into a prosperous . John Russell established the Green River Works in 1834, hiring skilled German workers at what was the country's first factory. The Connecticut River Railroad would be the first of several s to enter the town, replacing the former canal trade.

According to the , the town has a total area of 21.9 s (56.8 ), of which, 21.7 square miles (56.3 km²) of it is land and 0.2 square miles (0.5 km²) of it (0.87%) is water. Greenfield is located at the center of the county, and is bordered by Colrain, Leyden and Bernardston to the north, Gill to the east, Montague to the southeast, Deerfield to the south, and Shelburne to the west. Greenfield is located thirty-nine miles north of Springfield and ninety miles west-northwest of Boston.

Greenfield lies at the confluence of the Deerfield, Green and Connecticut rivers. The Green River runs from the north, through town to the Deerfield, which lies along the city's southern border. From there, the Deerfield meets the Connecticut, which flows southward along the Montague border before both rivers bend eastward briefly before heading southward. Several brooks flow into the three rivers, as well as a fourth river, the Fall River, which makes up the city's border with Gill. The city is located beside the , the northernmost subridge of the , and is surrounded by hills, with the town center lying on an elevated point above the rivers.

Greenfield lies at the junction of four roads. heads northward through the city, and is duplexed for a 3-mile stretch with Route 2, the . The road enters over the Fall River as a surface road, before becoming a highway stretch to I-91. Once it leaves the road, it becomes a surface road again. From the highway upgrade to the exit from I-91, a portion of Route 2A follows Route 2's former right-of-way through town. At the town center, Route 2A meets the duplexed and Route 10, the road that the Interstate replaced, which comes over the Deerfield River in the south before heading northward through town, with another interchange along the highway portion of Route 2.

Deerfield lies at the junction of two separate sets of the Springfield Terminal railway, the east-west line heading from the northern points of Worcester County towards the and Albany, and the north-south line heading from Springfield in the south towards Vermont in the north. The town is served by several bus lines taking tourists towards the northern Berkshires, as well as being the hub of the Franklin Regional Transit Authority (FRTA), whose local service extends from Bernardston to Northampton and from Athol to Charlemont. The nearest general aviation airport is located in the Turners Falls section of Montague, and the nearest national air service is at in Windsor Locks, .

There were 7,939 households out of which 26.1% had children under the age of 18 living with them, 38.6% were married couples living together, 12.7% had a female householder with no husband present, and 44.9% were non-families. 36.9% of all households were made up of individuals and 13.6% had someone living alone who was 65 years of age or older. The average household size was 2.19 and the average family size was 2.88. Gay and lesbian couples living together in Franklin County constitute 2.08% of the population (U.S. Census)

Dominant ethnic groups in Greenfield include n (), and Franco-American, though recent years have seen a dramatic rise in s and immigrants from former states.

Greenfield's city status was established with a revised corporate charter, which allowed the election of its first mayor, Christine Forgey, in 2003. When a town, it had been governed by a and a . It is the Commonwealth's newest city. Greenfield has its own police, fire and ambulance services, as well as public works, and is the home base of the regional waste management system. The city has the central post office for the "013" series of s, which extends through Franklin County and several towns in Worcester County. The Greenfield Public Library is one of the larger libraries in the area, and is connected to the regional library network. Greenfield is home to the Baystate-Franklin Medical Center, which serves much of the northern Pioneer Valley. As county seat, Greenfield is also home to many different state offices, including courthouses, one of the offices of the Northwest District Attorney, Elizabeth D. Scheibel, and the Franklin County Jail.

On the state level, Greenfield is represented in the by the Second Franklin district, which includes much of southeastern Franklin County and towns in western Worcester County. In the , the town is represented by the Hampshire and Franklin district, which includes much of eastern Franklin and Hampshire Counties. [ [http://www.mass.gov/legis/city_town.htm List of Massachusetts Legislators by City and Town] ] The town is patrolled by the Second (Shelburne Falls) Barracks of Troop "B" of the . [ [http://www.mass.gov/?pageID=eopsterminal&L=5&L0=Home&L1=Law+Enforcement+%26+Criminal+Justice&L2=Law+Enforcement&L3=State+Police+Troops&L4=Troop+B&sid=Eeops&b=terminalcontent&f=msp_divisions_field_services_troops_troop_b_msp_field_troop_b_station_b2&csid=Eeops Station B-2, SP Shelburne Falls] ]

Greenfield also has several private schools. The oldest is the Stoneleigh-Burnham School, a private 7th-12th grade boarding school for girls. The Greenfield Center School serves students through eighth grade with an "ethical" approach to education. There are two religious schools, the Cornerstone Christian School and the Holy Trinity School, both of which serve pre-kindergarten through eighth grades.

Greenfield is home to the , which serves the northern Pioneer Valley. The nearest state college is , and the nearest state university is the . There are also several private colleges, including members of the Five Colleges and Seven Sisters, in the Northampton area.

* Historical Society of Greenfield, 43 Church Street
* is a community hall, known for traditional music and dance in the Pioneer Valley.
* , an independent K-8th grade school, is the a site of The Coalition of Essential Schools and the home of the New England Coalition of Progressive Educators.
* Greenfield Energy Park, a community greenspace featuring renewable energy exhibits, gardens, native arboretum, caboose museum, concerts, and public art in the heart of downtown Greenfield. Site of former train station. Headquartered at the Northeast Sustainable Energy Association (NESEA).
* Leavitt-Hovey House/Greenfield Public Library, built in 1797 by Asher Benjamin for judge .
* The area is home to an known as a . It is located on Shelburne Road, while facing Greenfield, immediately after the Route 2 bridge. From under the overpass, the road appears to rise slightly to a crest a few hundred feet away. The illusion is slight, but convincing. A car in neutral at the "bottom" of the rise will appear to crawl uphill.
* Poet's Seat Tower Park features a 1912 named for the site's attraction to poets, particularly . The annual celebration takes place at Poet's Seat, which overlooks Beacon Field.