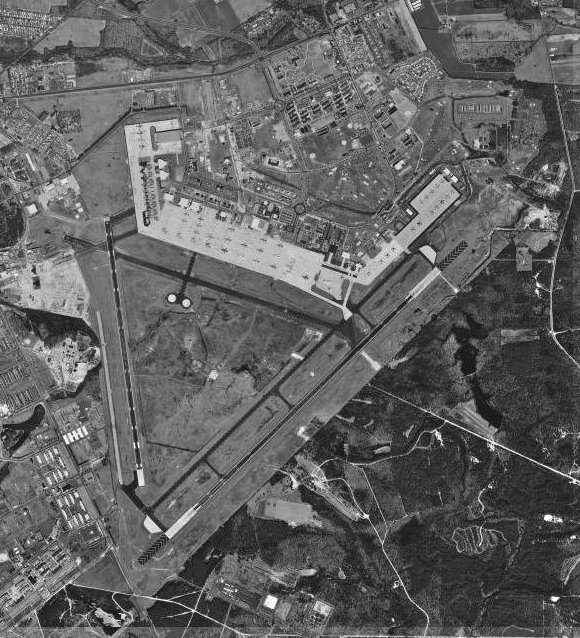 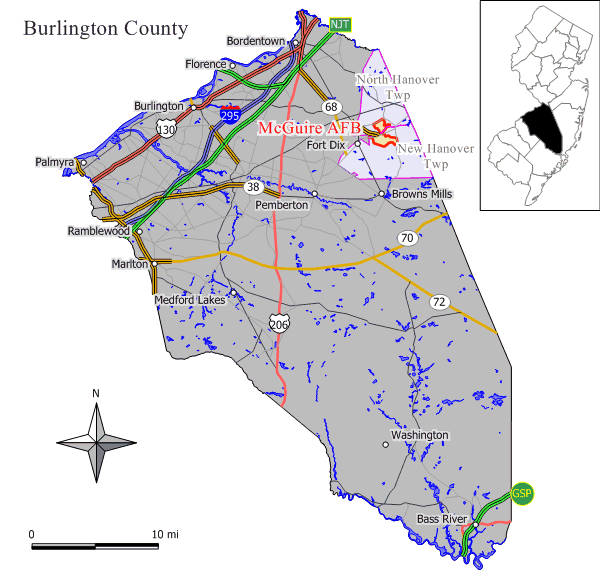 McGuire Air Force Base airport codes|WRI|KWRI|WRI is a Base under the operational control of the (AMC).

McGuire is located in Burlington County in south central , approximately 15 miles from Trenton, 45 minutes from Philadelphia and 90 minutes from Atlantic City and .

McGuire Air Force Base is home to the (305 AMW) and the 's (514 AMW) which comprises and aircraft. The C-17A is the Air Force's newest heavy airlifter, capable of delivering over 170,000 pounds (77 metric tons) of cargo. Combined with the KC-10, the largest tanker aircraft in the Air Force fleet, the C-17 can fly refueled anywhere in the world. McGuire is also home to the (108 ARW) - an -gained unit of the , flying the . This makes McGuire the only base in both the Air Mobility Command and the entire hosting three AMC-gained flying wings of the Regular Air Force, and .

One of the critical jobs McGuire Air Force Base accomplishes is hosting the flying needs of next-door neighbor Fort Dix Army installation. For years, Fort Dix has been a gateway for U.S. Army personnel shipping out to overseas locations. Air Force and civilian AMC-contracted aircraft use McGuire's two s to facilitate this mission. Many hundreds of thousands of Air Force, Army, Navy, and Marine Corps personnel have left the for overseas locations from McGuire Air Force Base.

McGuire Air Force Base is part of the .

Flight operations to support Camp Dix at an adjacent airfield, carved from pasture land, took place as early as 1926. Facilities and runways to adequately support an ongoing air mission began in 1937 as a Civilian Conservation Corps project on newly acquired land for the great Army Air Forces expansion approved by the Roosevelt Administration. This nascent airfield and accompanying wooden structures was named "Rudd Field." To meet the requirements for a possible World War, Rudd Field was renamed Fort Dix Army Air Base in 1939, and underwent massive expansion from 1940-1941. This base had its first permanent occupant by June 1941. The base closed in February 1946, and for two years it remained on the inactive installations list until the caused the newly created USAF to reopen many former Army Air Force installations to meet its burgeoning operational requirements.

As the Air Force prepared to reopen by the installation as a (SAC) installation, Fort Dix AAB was renamed McGuire AFB in January 1948 in honor of , a World War II pilot, fighter ace, and recipient, The officially reopened McGuire AFB as a primary installation 29 August 1948.

While initially a combat base, operating primarily bombers and fighters of SAC and the (ADC), the strategic airlift mission and the Eastern Division of the (MATS) (later the and today's 21st Expeditionary Mobility Task Force) transferred to McGuire from , MA, in 1954. Under MATS (later Military Airlift Command (MAC) and (AMC)), McGuire became the "Gateway to the East," serving the U.S. Military and its allies in Europe, the Middle East and Africa with cargo and transportation. Over the years McGuire's mission aircraft have been dominated by the greatest air mobility aircraft of their day: the , , (McGuire was the first base to operate the world's first all-jet strategic airlifter), , and C-17 airlifters, as well as , and tanker aircraft. From 1967 through 2004, McGuire was the best known C-141 base in the world, possessing up to a quarter of AMC's fleet of that historic aircraft.

Team McGuire has provided key support in almost every major American contingency operation from 1955 through the present day, including Operation SAFE HAVEN, Vietnam, NICKEL GRASS, the Grenada rescue effort, Operation DESERT SHIELD/STORM in 1990, and Operation DESERT CALM following the first gulf war. In 1992, McGuire AFB became a major part of the newly activated (AMC). A newly created concept, an air mobility wing (AMW) possessing both tankers and airlift aircraft, activated on McGuire in 1994. The storied 305th Air Refueling Wing, "Can Do!" moved to McGuire to become the host 305 AMW on 1 October 1994. The 21st Air Force, coupled with the stand up of the 621st Air Mobility Operations Group (621 AMOG) and its later reorganization to the (621 CRW), partnered with the 305 AMW and spear-headed virtually every contingency over the past 14 years, from Operation JOINT ENDEAVOR in the Balkans to Operation IRAQI FREEDOM. McGuire itself, through its support organizations, has also been a key component in the onward transport of materials and personnel to crisis points all over the world: in 1999, McGuire served as the lead staging base for the evacuation of Kosovo refugees in Operation OPEN ARMS; McGuire was the rally and staging point for FEMA operations in New York City after the ; in 2005, the base lent key support for Hurricanes Kartrina and Rita. In 2006, McGuire AFB hosted over 1,800 Lebanese Americans evacuated from the battles there between Israel and Hezbollah insurgents. In 2008, McGuire assumed responsibility for the no-fail "Red Ball Express" aerial port mission, supplying and re-supplying coalition efforts in ENDURING FREEDOM. Today the men and women of McGuire AFB continue to be in the forefront of high visibility operations with regular deployments of airlift and aerial refueling aircraft as well as support elements for combat operations. McGuire hosted a rapidly assembled STRATCOM Joint Task Force satellite recovery team with no prior notice in February 2008, winning praise for its flexibility and support. Team McGuire remains heavily engaged in providing direct combat support to two regional conflicts and provided personnel, resources and aircraft.

The future of McGuire is bright-indeed, as part of a Department of Defense (DoD) initiative, McGuire will be the lead service in the first ever tri-service Joint super-base, combining its infrastructure support with the support of Fort Dix (Army) and (Navy). Additionally, the 2005 (BRAC) commission identified several units to be added to Team McGuire over the next few years, including contingents from every service branch. Construction of many new facilities, an intense beautification effort, and rapidly proliferating, new and spacious privately owned contract family housing, make McGuire one of the premier Air Force installations.

Base Realignment and Closure is a congressionally authorized process the Department of Defense has previously used to reorganize its base structure to more efficiently and effectively support the US forces, increase operational readiness and facilitate joint basing. The current process began with a threat assessment of the future national security environment, followed by the development of a force structure plan and basing requirements to meet these threats. BRAC law set into effect the Joint Base initiative which will establish . McGuire will receive assets and support functions from , which will be closed by BRAC.

Once the BRAC initiative is complete, McGuire will be home to 37 new aircraft including; C-130s, C-9s, C-12s, AH-1 Cobras, CH-53 Super Stallions and UH-1 Hueys. The initiative will also bring over 1,700 joint support personnel.

Under a BRAC-directed Joint Base initiative, Fort Dix and NAES Lakehurst will be combined with McGuire AFB to support the three installations as a single entity. While each installation will maintain its own operational identity, the consolidation will streamline installation support, while increasing mission effectiveness in supporting the war-fighter.

Although the installation management functions will consolidate, the missions of each of the three installations will continue. The Air Force will still provide global mobility and expeditionary combat support; the Army will mobilize and train soldiers; and the Navy will continue to assure fixed and vertical wing aircraft operate safely and effectively worldwide. McGuire has a long history of providing a total force global mobility capability. BRAC and Joint Basing provide the opportunity to grow this into a joint capability. The Joint Base initiative will make McGuire-Dix-Lakehurst the world’s premier tri-service joint base.

In July 2007, the issued an order to the US military to clean up the contaminants at McGuire AFB. Areas that need cleanup include , fire training areas, mixing shops, fuel storage and leak areas, underground tanks and fuel lines, a PCB () spill site, and a wastewater treatment plant sludge disposal area. [http://www.military.com/NewsContent/0,13319,142338,00.html?ESRC=airforce-a.nl]

The serves children in public school for grades K - 6 from North Hanover Township and from McGuire Air Force Base. Schools are located on the base and in Jacobstown.