McClellan Air Force Base
For the civil use of this facility after 2001, see McClellan Airfield. 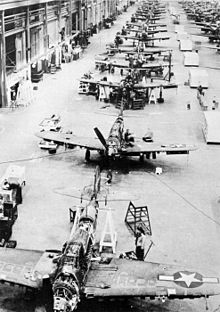 Bell P-39 Repair Line.
To step up its delivery of Speedy Bell P-39 "Airacobra" fighter airplanes to American pilots in the South Pacific, the Army Air Forces Air Service Command put American production line methods to work in its repair docks at McClellan Field, California. Two and one-half million dollars worth of airplanes are getting overhauled by civilian Air Service Command workers at Sacramento, California preparatory to being sent against the enemy. 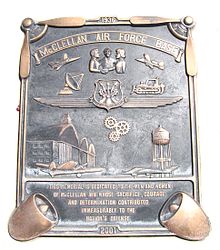 McClellan Air Force Base (1935–2001) is a former United States Air Force base located in the North Highlands area of Sacramento County, 7 miles (11 km) northeast of Sacramento, California. For the vast majority of its operational lifetime, McClellan was a logistics and maintenance facility for a wide variety of military aircraft, equipment and supplies, primarily under the cognizance of the Air Force Logistics Command (AFLC) and later the Air Force Materiel Command (AFMC). The United States Coast Guard previously operated Coast Guard Air Station Sacramento at McClellan AFB as a tenant activity, operating and maintaining several HC-130 Hercules aircraft. CGAS Sacramento continues to operate at McClellan following its closure as an Air Force Base and is the only remaining military aviation unit and installation on the airfield.

McClellan AFB was closed as a result of BRAC 1995. After it officially closed on 13 July 2001, portions of McClellan and the surrounding area were converted into a business park.

McClellan's air traffic control tower remains standing, but was deactivated following the closure of McClellan AFB. However, the airfield's navigational aids such as the VOR/DME and ILS remain operational. McClellan Airfield now operates as an uncontrolled (non-towered) joint civil-military airfield with various mixed-use tenants as part of McClellan Park.[1] The remaining military activity consists of Coast Guard Air Station Sacramento, operating HC-130 Hercules aircraft, as well as an AAFES BX, a commissary and VA Outpatient Clinic [2] VA Hospital which are primarily utilized by Coast Guard personnel, military retirees and National Guard and Reserve personnel, and their immediate families/dependents in the Sacramento area. McClellan is also the home of the Aerospace Museum of California and the Pacific Region Campus for the AmeriCorps National Civilian Community Corps.

[3] McClellan Air Force Base, was established in 1935. It was named after Major Hezekiah McClellan (1894–1936) on 1 December 1939, a pioneer in arctic aeronautical tests. Major McClellan was a posthumous recipient of the Distinguished Flying Cross who prepared early charts and records while pioneering Alaskan air routes. He died on 25 May 1936 when his Consolidated P-30 which he was flight testing, crashed near Centerville, Ohio.

Other names of the facility were:

Construction of the Pacific Air Depot began in 1935, and the main structures, including administrative buildings, barracks, warehouses and a hospital were completed on 18 April 1938. It was one of only four such air depots in the country. In 1938 the base was renamed Sacramento Air Depot and underwent a major expansion as a repair and overhaul facility for P-38 and P-39 fighter planes. The planes were serviced on an assembly line basis. In 1940 an assembly line was added to overhaul P-40 fighters.

In December 1941, soon after the attack on Pearl Harbor, P-40s as well as B-26 and B-17 bombers began arriving at the field to be armed and prepared for immediate shipment overseas. Some B-17s came direct to McClellan from the factories. During this time most of the Army Air Forces planes that went to the Pacific Theater were prepared at McClellan. In March 1942 Lieutenant Colonel Jimmy Doolittle's B-25s arrived at McClellan for arming in preparation for their famous Tokyo raid. The Doolittle Raiders practiced their aircraft carrier takeoff techniques at the Yolo County Airport, about 20 miles west: The airport runway was painted to represent the flight deck of the aircraft carrier USS Hornet.

During World War II, numerous planes arrived at McClellan from all over the U.S. to be armed and otherwise prepared for shipment overseas to combat areas. After the war McClellan became a storage center of several types of aircraft including B-29 bombers.

The base was renamed McClellan Air Force Base in 1948 and its repair and overhaul mission continued throughout the Cold War as an installation of the Air Force Logistics Command (AFLC) and later the Air Force Material Command (AFMC), with the overhaul facility being known as the Sacramento Air Logistics Center. During the 1950s and 1960s, the base also hosted the 552d Airborne Early Warning Wing, operating RC-121 and EC-121 Warning Star aircraft. After the Cold War ended, McClellan's closure was announced in 1995 by the BRAC Commission during the Clinton administration.

Throughout the 1980s and early 1990s, McClellan functioned as the main depot for overhauling the Air Force's F-111, FB-111 and EF-111 aircraft, as well as the A-10 Thunderbolt II aircraft. It also hosted a tenant WC-135 unit and supported the sophisticated electronic Operation Red Flag at Nellis AFB Nevada. A small contingent of F-111D and F-111F aircraft of the 431 Test & Evaluation Squadron, 57 Fighter Weapons Wing, Nellis AFB Nevada was also detached to McClellan.

The chemicals used in aircraft maintenance, such as solvents, caustic cleaners, fuel oils and lubricants have caused extensive contamination at McClellan, particularly of groundwater. In addition, there are small amounts of radioactive waste at the base. The contamination was the result of leaks of pipes and storage tanks, spills, landfills and fire training areas. At one time, it was one of the most heavily polluted bases in the nation. Cleanup started in the 1980s. As of 2005[update], it is still ongoing and expected to take at least another decade. McClellan is listed on the United States Environmental Protection Agency‎'s National Priorities List as part of the Superfund created during the 1980s.[4][5]

While the Aviation Safety Network, part of FlightSafety.org, lists only one crash of a Curtis C-46 as originating from McClellan AFB on 18 February 1944,[6] another crash involving an RC-121 also at take-off, is documented on a military reunion site.[7] A TF-104 departed and returned for an emergency landing and crashed on the runway on approach in 1964, killing both crew.[8]

The former McClellan Air Force Base is also the home of the Aerospace Museum of California. The museum itself was originally set up as the McClellan Aviation Museum in 1986 (before the McClellan AFB closed). It was chartered by the National Museum of the United States Air Force and in 2005 it changed its name to the California Aerospace Museum. Various military aircraft sit on display inside one of the hangars, and many more are outside on the tarmac. The museum has displays which highlight the mission of the base when it was active, as well as neighboring bases such as Beale AFB, Travis AFB and the since closed Mather AFB. The museum hosts educational programs to schools in the local area.[9]