Developed in Australia, it was invented by Edward George "Taffy" Bowen while employed as Chief of the Division of Radiophysics of the Commonwealth Scientific and Industrial Research Organisation (CSIRO). Another engineered version of the system was deployed by Amalgamated Wireless Australasia Limited in the early 1950s operating in the 200 MHz VHF band. This Australian domestic version was referred to by the Federal Department of Civil Aviation as DME(D) (or DME Domestic), and the later international version adopted by ICAO as DME(I).

DME is similar to secondary radar, except in reverse. The system was a post-war development of the IFF (identification friend or foe) systems of World War II. To maintain compatibility, DME is functionally identical to the distance measuring component of TACAN.

Aircraft use DME to determine their distance from a land-based transponder by sending and receiving pulse pairs - two pulses of fixed duration and separation. The ground stations are typically co-located with VORs. A typical DME ground transponder system for en-route or terminal navigation will have a 1 kW peak pulse output on the assigned UHF channel.

A low-power DME can also be co-located with an ILS glide slope or localizer where it provides an accurate distance function, similar to that otherwise provided by ILS Marker Beacons.

The DME system is composed of a UHF transmitter/receiver (interrogator) in the aircraft and a UHF receiver/transmitter (transponder) on the ground. 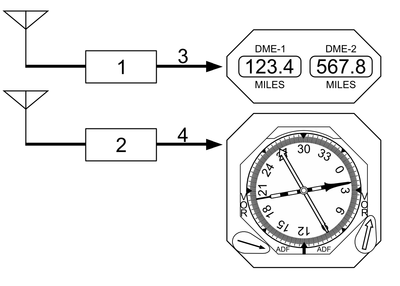 The aircraft interrogates the ground transponder with a series of pulse-pairs (interrogations) and, after a precise time delay (typically 50 microseconds), the ground station replies with an identical sequence of reply pulse-pairs. The DME receiver in the aircraft searches for pulse-pairs (X-mode= 12 microsecond spacing) with the correct time interval between them, which is determined by each individual aircraft's particular interrogation pattern. The aircraft interrogator locks on to the DME ground station once it understands that the particular pulse sequence is the interrogation sequence it sent out originally. Once the receiver is locked on, it has a narrower window in which to look for the echoes and can retain lock.

A typical DME transponder can provide distance information to 100 aircraft at a time. Above this limit the transponder avoids overload by limiting the gain of the receiver. Replies to weaker more distant interrogations are ignored to lower the transponder load. The technical term for overload of a DME station caused by large numbers of aircraft is station saturation.

DME frequencies are paired to VHF omnidirectional range (VOR) frequencies and a DME interrogator is designed to automatically tune to the corresponding DME frequency when the associated VOR frequency is selected. An airplane’s DME interrogator uses frequencies from 1025 to 1150 MHz. DME transponders transmit on a channel in the 962 to 1150 MHz range and receive on a corresponding channel between 962 to 1213 MHz. The band is divided into 126 channels for interrogation and 126 channels for reply. The interrogation and reply frequencies always differ by 63 MHz. The spacing of all channels is 1 MHz with a signal spectrum width of 100 kHz.

DME facilities identify themselves with a 1350 Hz morse code three letter identity. If collocated with a VOR or ILS, it will have the same identity code as the parent facility. Additionally, the DME will identify itself between those of the parent facility. The DME identity is 1350 Hz to differentiate itself from the 1020 Hz tone of the VOR or the ILS localizer.

The accuracy of DME ground stations is 185 m (±0.1 nmi).[1] It's important to understand that DME provides the physical distance from the aircraft to the DME transponder. This distance is often referred to as 'slant range' and depends trigonometrically upon both the altitude above the transponder and the ground distance from it.

For example, an aircraft directly above the DME station at 6000 ft (1 nmi) altitude would still show 1.0 nmi (1.9 km) on the DME readout. The aircraft is technically a mile away, just a mile straight up. Slant range error is most pronounced at high altitudes when close to the DME station.

Radio-navigation aids must keep a certain degree of accuracy, given by international standards, FAA,[2] EASA, ICAO, etc. To assure this is the case, flight inspection organizations check periodically critical parameters with properly equipped aircraft to calibrate and certify DME precision.

ICAO recommends accuracy of 0.25 nmi plus 1.25% of the distance measured.

A terminal DME, referred to as a TDME in navigational charts, is a DME that is designed to provide a 0 reading at the threshold point of the runway, regardless of the physical location of the equipment. It is typically associated with ILS or other instrument approach.

DME operation will continue and possibly expand as an alternate navigation source to space-based navigational systems such as GPS and Galileo.[3]