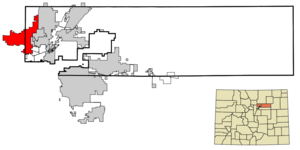 The City of Westminster is a Home Rule Municipality located in Adams County and Jefferson County of the State of Colorado, . Westminster is a northwest of Denver. The Westminster Municipal Center is located convert|9|mi|km|0|sp=us of the . The estimates that the city population was 105,753 on .

discovered in the South Platte River Valley in 1858 brought national attention to the area that would become Westminster, Colorado. The promise of fortune and the Land Act of 1862 encouraged many s from the east to make their home instead of heading on to . Before the settlements came, wildlife like and buffalo made their homes in this area. There is also evidence of Indians near the Crown Point (Gregory Hill) area.

After the first permanent settler, Pleasant DeSpain, built his home in 1870 on 160 s (near what is now West 76th Avenue and Lowell Street), the area became known as DeSpain Junction and began attracting other settlers including horse breeder Edward Bruce Bowles who was instrumental in constructing the town's depot in 1881. In 1885, C.J.Harris arrived in DeSpain Junction and began buying up land. Soon the town was renamed Harris, but was also known as Harris Park.

In 1891, construction began on the , which was to become "The Princeton of the West" and can still be seen today at West 83rd Avenue and Federal Boulevard. By 1911, the town had incorporated and was renamed one final time to Westminster, in honor of .

There were 38,343 households out of which 35.7% had children under the age of 18 living with them, 53.6% were married couples living together, 9.6% had a female householder with no husband present, and 32.1% were non-families. 23.7% of all households were made up of individuals and 4.5% had someone living alone who was 65 years of age or older. The average household size was 2.62 and the average family size was 3.15.

The Denver (RTD) provides bus service to Westminster and the rest of the metropolitan area. RTD plans to build a line from through Westminster to Boulder.

Westminster is served by and nearby .

One of the outstanding amenities provided to the of is the city's trail and system. The is one of the jewels of the system, extending approximately convert|10|mi|km from the eastern boundary of the city to . Other trails, available for jogging, biking, wildlife viewing and enjoying the outdoors, have been constructed along the , Walnut Creek and Little Dry Creek. In addition, the city has preserved large expanses of land in the magnificent , the area, and areas reflecting the history of . Other significant open space areas are the lakes and ponds conserved at , , , and , to name a few. City Park, the recreational centers and many other neighborhood and community parks provide facilities for all citizens. [ [http://www.ci.westminster.co.us/city/outdoors.htm Open Space - City of Westminster, Colorado ] ]

McNally served on the Jefferson County school board from 1989 through 1997, 1995-97 as president. She currently serves on the board of Colorado Children's Trust Fund, where she works with dozens of nonprofits that address child abuse prevention issues. McNally served on the board of the Butterfly Pavilion from 1999 to 2001 and is a lifetime PTA member. As a city councilor, McNally serves as liaison to the Open Space Board, Transportation Commission, Transportation Mobility Organization (TMO) and the U.S. 36 EIS elected officials committee. McNally serves as an alternate to DRCOG and the Mayors Commissioners Coalition for U.S. 36.

McNally received the Thomas Jefferson/Madison Memorial Institute Meritorious Service award in 1997 and was named to the 1997 All-State Board for the Colorado Association of School Boards. She also has received the Colorado Athletic Director's award and Outstanding Citizen Educator award.

McNally has lived in Westminster for 27 years, after moving to Colorado from . She has been married for 34 years and has three grown kids, three grandsons and two pugs. She worked as a homemaker for 23 years before accepting a job as assistant to the bishop for the . During that time, she traveled to to participate in celebrations of the 10th anniversary of the Lutheran church. She was a trainer for drug/alcohol and suicide prevention and leadership development for classified employees in Jefferson County Schools. She has been a volunteer lay chaplain at Lutheran Hospital and Colorado Lutheran Home.

McNally has completed training for consensus/problem-solving facilitator training from Bob Chadwick. She has facilitated school staffs and numerous church groups and councils. She continues to do work on weekends as needed.

McNally is now Executive Secretary for the financial firm, .

In her spare time, she enjoys knitting, crocheting and sewing.

Prior to his election to City Council, Kauffman served as a member of the city's Special Permit and License Board from January 1998 to November 2001. Kauffman credits his experiences on this board for igniting his passion for local government. Also during this time he graduated from the Westminster Citizens Police Academy.

Kauffman is an assistant vice president of commercial lending at in Westminster.

The Colorado native was born in and grew up in Iowa, with two early years spent living in .

In 1990 he earned his bachelor's degree in communication with minors in business and music from in Indiana.

In 1994, Kauffman and his wife Kimberly, a Boulder native, made a conscious decision to live in Westminster, noting the opportunities Westminster provides to residents, businesses, employees and visitors. An avid golfer, tennis player, traveler and singer, Kauffman enjoys many recreational activities in Westminster with Kimberly and their two children, Courtney and Tyler. Kauffman is the secretary of the board for the Colorado chapter of the .

was appointed to a two-year term on the Westminster City Council on , , to fill a council seat vacated by Mayor Ed Moss. In November 2003, Dittman was elected to serve a four-year term.

Dittman is past-president of the Westminster Rotary Club and has served on the boards of the Yellow Ribbon Light for Life Teen Suicide Prevention Foundation, the Westminster Community Artist Series and the Advisory Council. He also serves on the Community Education Foundation. Dittman's awards include the Regis Administrator of the Year, Educational Theatre Association Administrator of the Year, Outstanding Young Men in America and placement in Who's Who in the West.

As a Westminster councillor, Dittman is interested in re-vitalization of South Westminster, transportation, public safety and creating a strong economic base for the city. Dittman holds a bachelor's degree from and a master's degree from the .

was elected to City Council in November 2005. She is the general manager for the Greenway Park Homeowners Association and public golf course. Lindsey has lived in the city, raised three boys and been an active citizen for more than 25 years. She has been a member of the city Environmental Advisory Board since 2004.

She has also served as a member of the Adjustments and Appeals Board; as a trainer for IYC, Internet and Your Child's safety; on the Jefferson County PTA Council; and as an Adopt-a-street volunteer.

Lindsey enjoys the community spirit of the residents and the dedication and environmental foresight of the city staff and officials. She wants to keep Westminster a safe and economically strong environment in which to raise families and enjoy our resources.

was elected to City Council in November 2005. He is a fourth generation native of Colorado, and Westminster has been his home for 25 years. He works as a test engineer with .

Major served eight years on the Board of Education for Adams County School District 50, four years as president. He has also served as an adult leader for the District 50 Drug Free Youth Conference, a volunteer high school tennis coach, as president of Denver Garden Railroad Society and as a member of the Westminster Transportation Commission.

Major enjoys Westminster because it has the services and conveniences of a large city with the feel of a small town community. The city has easy access to the Front Range, major league sporting events, cultural shows and activities. More importantly, he believes the citizens take pride in the community and contribute many ways to help make it one of the most desirable cities in which to live.

was elected to City Council in November 2003. She is a Colorado native and still owns the home she grew up in on 73rd Avenue between Lowell and Irving.

Price has three children and spent seven years taking care of her mother. She and her husband, Lloyd, celebrated their 30th wedding anniversary in 2004.

Price is interested in working on safety issues within the city, as well as issues that affect young people. Price serves as a council representative for the Community Artist Series, the Jefferson County Youth Alcohol Intervention Program Board, the North Metro Community Diversion Board and the .

Price, a registered real estate appraiser, is currently the co-owner of Price Appraisal Service. She spent several years as an elementary and middle school teacher in Fort Collins, as well as Westminster school districts 50 and 12 after getting a bachelor's degree in education from the .

Price said the Westminster Promenade ranks among her favorite spots in the city. She likes to go there to see movies with her kids. She also enjoys spending her free time golfing with her husband and spending time with her family.

was elected to City Council in November 2005. Currently involved in commercial tire sales, he has both owned and managed small businesses in Westminster for more than 20 years.

Kaiser served on the Board of Education for Adams County School District 50 from 1995-2003, where he championed efforts to ensured accountability for the budget to taxpayers. He also helped form the citizen budget review committee, and served on the Adams County Board of Cooperative Educational Services, which administrates the self-insurance side of District 50.

Kaiser is interested in working on a number of issues in the city, including the following:

* sex offender-free city;
* no soliciting ordinance revision;
* noise ordinance revision;
* wards - put it to a vote of the people;
* maintain balanced budget and ensure tax dollars are being used to the maximum benefit of citizens;
* legislative agenda - state and federal;
* development that is compatible and harmonious with existing neighborhoods; and
* listening to the citizens via phone, e-mail, meetings and within their neighborhoods.

Kaiser comes from a small town in where he learned to appreciate the importance of community, where neighbors look out for each other, and everyone knows the local business owners and the teachers. He considers himself lucky to have found that in Westminster and believes that the small town mentality is the best part of Westminster.