A military base is a facility directly owned and operated by and/or for the military or one of its branches that shelters military equipment and personnel, and facilitates training and operations.[citation needed] In general, a military base provides accommodations for one or more units, but it may also be used as a command center, a training ground, or a proving ground. In most cases, a military base relies on some outside help in order to operate. However, certain complex bases are able to endure by themselves for long periods because they are able to provide food, water and other life support necessities for their inhabitants while under siege.

The word base is first recorded in English language from c.1325, and comes from Old French bas, which is derived from Latin basis "foundation", itself derived from Archaic Greek basis "step, pedestal," from bainein "to step". The military sense of the word only dates from the 1860s. The verb meaning "to place on a foundation" is from 1841.[1]

Fort Jefferson in Florida in the United States is an example of a military base although no particular size or layout is typical. Fort Jefferson is no longer in use and is currently part of the Dry Tortugas National Park.

Bases are usually extra-legal jurisdictions not subject to civil law. They can range from small outposts to military cities containing up to 100,000 people. Some military bases may belong to a different nation or state than the territory surrounding it.

The name used generally refers to the type of military activity that takes place at the base.

A military base may go by any of a number of names, such as the following: 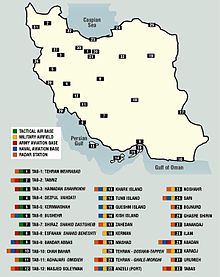 some kinds of Military installations of Iran - 2002

Depending on the context, the term 'military base' may refer to any establishment (usually permanent) that houses a nation's armed forces, or even organized paramilitary forces such as the Police, Constabulary, Militia, or Guards. Alternatively, the term may refer solely to an establishment which is used only by an army (or possibly other land fighting related forces, such as marines) to the exclusion of a base used by either an air force or a navy. This is consistent with the different meanings of the word 'military'.

Some examples of permanent military bases used by the navies and air forces of the world are the Royal Dockyards in Portsmouth, UK, the Naval Air Station Whidbey Island, Washington State, USA, or Ramstein Air Base, Germany (the last two are each designated as a Main Operating Base). Other examples of non- or semi-permanent military bases include a Forward Operating Base (FOB), a Logistics Base (Log base) and a Fire Base (FB).

A military base may also contain large concentrations of military supplies in order to support military logistics. Most military bases are restricted to the general public and usually only authorized personnel may enter them (be it military personnel or their relatives and authorized civilian personnel).

In Russian usage "military base" or "naval base" is not limited to denoting a specific fence described facility and usually encompasses a broad territory within which a number of discrete facilities may be located. As an examples, 1) the Russian Sevastopol Naval Base comprises individual facilities located within the city of Sevastopol proper (waterfront moorings, weapons stores, a headquarters compound, and a naval infantry base) as well as an airfield at Kacha north of the city; 2) the Leningrad Naval Base comprises all naval facilities in the greater St. Petersburg area including training schools, commissioning institutes, the naval academy, and the Kronshtadt base on Kotlin island. 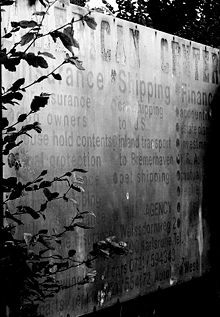 Civilian services offered to soldiers outside a military base

An Overseas military base is a military base that is geographically located outside of the territory of the country whose armed forces are the principal occupants of the base.

Furthermore, overseas military bases often serve as the source of the military brat subculture due to the children of the bases' occupant military being born or raised in the host country but raised with a remote parental knowledge of the occupant military's home country.

In the 18th and 19th Centuries the Royal Engineers were largely responsible for erecting military bases in the British Isles and the British Empire. In 1792 the Chief Engineer was instructed to prepare the Barrack Construction estimates for Parliament and at the same time the Department of the Barrackmaster-General was established.

During the period from the 1840s through the 1860s barracks were constructed under supervision of the Royal Engineers in:

British naval bases are traditionally named, commissioned, and administered as though they were naval ships. For this reason they are sometimes called stone frigates.