In 2003, the previous Raleigh-Durham-Chapel Hill metropolitan statistical area (MSA) was re-defined by the U.S. Office of Management and Budget, resulting in the formation of the Raleigh-Cary, NC MSA and the Durham, NC MSA.

Chapel Hill is located in the southeast corner of Orange County. It is bounded on the west by the town of Carrboro and on the northeast by the city of Durham. However, most of Chapel Hill's borders are adjacent to unincorporated portions of Orange County and Chatham County rather than shared with another municipality.

Chapel Hill and its surrounding area have historically been politically liberal. Orange County voted for Barack Obama 72%-27% over John McCain in the 2008 presidential election.[6]

The town also shares with Carrboro a vibrant music scene. Cat's Cradle in Carrboro a nationally recognized live music club,[8] Local 506 and other Chapel Hill bars (such as the Cave, and Reservoir) often host local, national, and international acts in all genres. Archers of Loaf, Squirrel Nut Zippers, James Taylor, George Hamilton IV, Southern Culture on the Skids, Superchunk, Polvo and Ben Folds Five are among the notable musical acts whose careers began in Chapel Hill. Chapel Hill has also been a center for the modern revival of old-time music with such bands as the Hollow Rock String band, the Tug Creek Ramblers, the Two Dollar Pistols, the Fuzzy Mountain String band, Big Fat Gap and the Red Clay Ramblers.[9] Chapel Hill was also the founding home of now defunct indie label Mammoth Records, as well as now Durham-based Merge Records. Bruce Springsteen has also made a point to visit the town on several tours. His most recent appearance was on September 14, 2003, at Kenan Memorial Stadium with the E Street Band, marking his fourth appearance overall. U2 also performed at Kenan on the first American date of their 1983 War Tour, where Bono famously climbed up to the top of the stage, during pouring rain and lightning, holding up a white flag for peace. 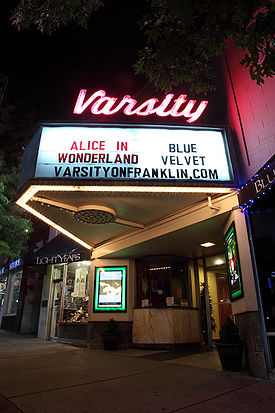 The Sorrell building on Franklin Street has always housed a movie theater (currently called The Varsity Theatre) since its construction in 1927[10].

The Chapel Hill/Carrboro Chambers of Commerce supports a vibrant business community among UNC Chapel Hill's strong academic presence. The town hosts a variety of corporations headquartered in Chapel Hill. Health insurance provider Blue Cross and Blue Shield of North Carolina is one of the town's ten largest employers at its Chapel Hill headquarters. Technology companies USAT Corp and Realtime Ops have made Chapel Hill their headquarters location. New companies are selecting the town as their base of operations such as the service company Alpha Install.

The Morehead Planetarium was, when it opened in 1949, one of only a handful of planetariums in the nation, and it has remained an important town landmark[11]. During the Mercury, Gemini, and Apollo programs, astronauts were trained there[12]. One of the town’s hallmark features is the giant sundial, located in the rose gardens in front of the planetarium on Franklin Street.

Influences of the University are seen throughout the town, even in the fire departments. Each fire station in Chapel Hill has a fire engine (numbers 31, 32, 33, 34, and 35) that is Carolina blue[13]. These engines are also decorated with different UNC decals, including a firefighter Rameses.

UNC has been very successful at college basketball and women’s soccer, and a passion for these sports has been a distinctive feature of the town's culture, fueled by the rivalry among North Carolina's four ACC teams: the North Carolina Tar Heels, the Duke Blue Devils, the NC State Wolfpack, and the Wake Forest Demon Deacons. More recently, the town has received regional notice as the site of a large annual Halloween street party, with an attendance regularly exceeding 70,000.

Even though Chapel Hill has a fairly large population, it still has a very small town feel. This can be seen walking through downtown where you will find many large murals painted on the buildings. Most of these murals were painted by UNC alumnus Michael Brown[14]. Also, for more than 30 years Chapel Hill has sponsored the annual street fair, Festifall in October[15]. The fair offer booths to artists, craftsmakers, nonprofits, and food vendors. Performance space is also available for musicians, martial artists and other groups. The fair is attended annually by tens of thousands. 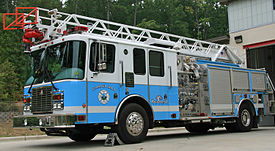 Even the fire trucks in Chapel Hill show support for UNC.

Chapel Hill also has some new urbanist village communities, such as Meadowmont Village[16] and Southern Village.[17] Meadowmont and Southern Village both have shopping centers, green space where concerts and movies take place, community pools, and schools. There is also a traditional style mall with a mix of national and local retailers at University Mall

Home place of early settler William Barbee of Middlesex County, Virginia, whose 1753 grant of 585 acres from the Earl of Granville was the first of two land grants in what is now the Chapel Hill-Durham area. Though William Barbee died shortly after establishing himself and his family in North Carolina, one of his eight children, Christopher Barbee, became an important contributor to his father’s adopted community and to the fledgling University of North Carolina.

There is an area on UNC Chapel Hill named Barbee Mountain; it is closed to the public but is a very old graveyard.The site and cemetery were surveyed by archaeologists from the University of North Carolina in late 1995 and early 1996, and a report was issued that extensively documents the cemetery. Milton D. Forsyth Jr. of the Durham-Orange Genealogical Society visited the cemetery as a guest of the archaeologists in March 1996 and recorded the inscriptions on the stones, which are also given in the report (not readily available) along with photographs of the stones and cemetery.

Only the stones of William and Gaskey Barbee have inscriptions, but there is a clearly a group of some 20 burials indicated by fieldstones and separated from a second group of at least 100. The first group is clearly family burials, and it is reasonable that William's father, Christopher (Kit) Barbee and his wife, are buried here, as this was known as 'Barbee's Mountain' and was their home. The second group of graves are probably slave burials. The State intends to preserve the cemetery. Christopher Barbee was the major donor of land for the university; William was both steward and superintendent of grounds for the university. 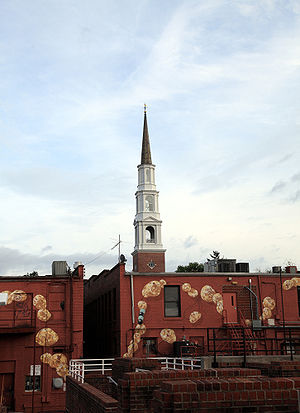 A mural at Amber Alley between Franklin Street and Rosemary Street

Chapel Hill, or at least the town center, indeed sits atop a hill which was originally occupied by a small Anglican "chapel of ease", built in 1752, known as New Hope Chapel. The Carolina Inn now occupies the site of the original chapel. In 1819, the town was founded to serve the University of North Carolina and grew up around it. The town was chartered in 1851, and its main street, Franklin Street, was named in memory of Benjamin Franklin[13][20].

In 1968, only a year after its schools became fully integrated, Chapel Hill became the first predominantly white municipality in the south to elect an African American mayor, Howard Lee[21]. Lee served from 1969 until 1975 and, among other things, helped establish Chapel Hill Transit, the town's bus system. Some 30 years later, in 2002, legislation was passed to make the local buses free of fares to all riders, leading to a large increase in ridership; the buses are financed through Chapel Hill and Carrboro city taxes, Federal grants, and UNC student fees. Several hybrid and articulated buses have been added recently. All buses carry GPS transmitters to report their location in real time to a tracking Web site. Buses can transport bicycles and have wheelchair lifts.

In 1993, the Town celebrated its Bicentennial, which resulted in the establishment of the Chapel Hill Museum. This cultural community resource "exhibiting the character and characters of Chapel Hill, North Carolina" includes among its permanent exhibits Alexander Julian, History of the Chapel Hill Fire Department, Chapel Hill's 1914 Fire Truck, The James Taylor Story, Farmer/James Pottery, and The Paul Green Legacy[22].

The town adopted its flag in 1990. According to flag designer Spring Davis, the blue represents the town and the University of North Carolina (whose colors are Carolina blue and white); the green represents "environmental awareness"; and the "townscape" in the inverted chevron represents "a sense of home, friends, and community."[23]

The current version of the town's seal, adopted in 1989, is in the process of being replaced with a similar but simpler version. All versions of the seal, dating back to the 1930s, depict Athena, the Greek goddess of wisdom and protector of cities.[24]

See also: List of alumni from University of North Carolina at Chapel Hill 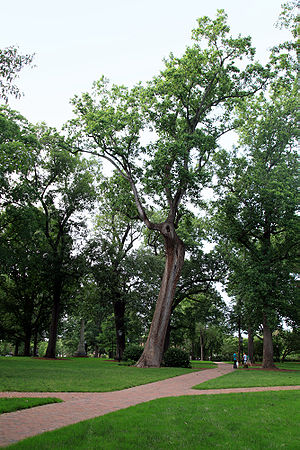 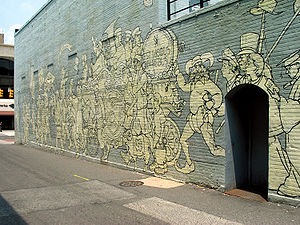 The colorful brick wall of Old Fraternity Row alley: one of many murals in Chapel Hill by artist Michael J. Brown[14]

There were 17,808 households out of which 22.4% had children under the age of 18 living with them, 36.2% were married couples living together, 7.5% had a female householder with no husband present, and 54.3% were non-families. 31.2% of all households were made up of individuals and 6.6% had someone living alone who was 65 years of age or older. The average household size was 2.22 and the average family size was 2.88.