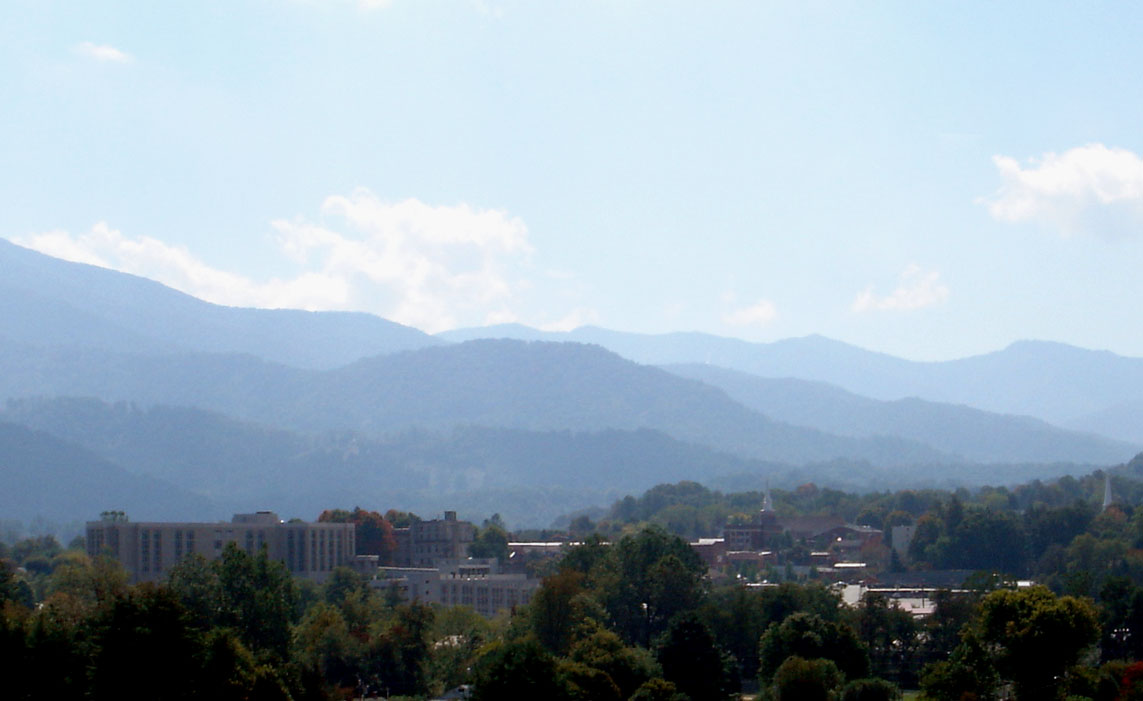 As of late 2006 the town of Waynesville government estimated the population at 10,000.

The Town of Waynesville was founded in 1809 by , an soldier. He donated land for the courthouse, jail, and public square, and named the town after his former commander in the war, .

Waynesville also has a connection to another war. With news of General 's surrender traveling slowly, the continued in . The final shots of that war, east of the , were fired near Sulphur Springs and General James Martin surrendered honorably on May 9, 1865 (See The "Battle" of Waynesville below.)

The Town of Waynesville was incorporated in 1871. In July 1995 the Towns of Hazelwood and Waynesville merged into one community and continued to grow with a population today of almost 10,000.

Waynesville began to see development after arrival of the railroad in 1884. The agricultural, lumber and tourism industries in Waynesville and Haywood County began to thrive as access to the west was opened up.

The area of Waynesville located along Richland Creek, northwest and down hill from Main Street, was where the railroad tracks were laid. Until this time the area had been essentially a swampland, with a few scattered buildings but no major development. Once the depot was built and the train arrived this section was developed. It was given the name of Frog Level. Frog Level was so named by the local community because of its low-lying location along Richland Creek, the "frog level" when the area flooded.

Downtown and the nearby Frog Level commercial centers of Waynesville continued to be the central focus for social life, transportation, and wholesale and retail businesses through the 1940s. Businesses in the Frog Level area in the 1930s and 1940s included hardware stores, farm supplies, coal sales, auto dealers and garages, furniture stores, wholesale groceries, warehouses and lumber companies, all businesses dependent on the railroad. However, as the automobile became the primary mode of transportation for most residents, the railroad declined in importance. This in turn lead to a shift of business away from Frog Level. The last passenger train arrived in Waynesville in 1949, and freight trains pass through Frog Level twice daily, with most trains continuing on to Sylva.

By the 1980s the railroad in Waynesville had been integrated into the Southern Railway Company system. The first depot burned in 1900, but it was soon replaced with another depot that remained standing until 1987.

New property owners within the district have begun a new wave of renovation efforts, and Frog Level is once again beginning to serve as a commercial part of the Town. Also Frog Level now sponsors the annual The Whole Bloomin' Thing, a festival of locally produced goods, services, produce and plants, as well as music, food and entertainment. For more information on the revitalization of Frog Level, go to the Frog Level Merchants site: http://froglevelmerchants.com [http://froglevelmerchants.com/]

* Cold Mountain, located convert|15|mi|km southeast of Waynesville within the , was made famous by the novel "Cold Mountain" by . A major motion picture based on the novel was produced by in 2003.

* The 1996 movie "" was filmed in Western North Carolina. The scene where and are chased from a fast food restaurant parking lot in a car and a giant clown sign crashes through their windshield was filmed at the on Russ Avenue in Waynesville.

*Actor , whose real name is Byron Elsworth Barr is buried in the Green Hill Cemetery.

* Frog Level - The historic district whose name came about because of frequent flooding of Richland Creek. In the 70s and 80s it was known as a seedy part of downtown, mainly due to a now-closed bar called The Tap Room. In recent years, the revitalization of Main Street has spread down into this area. A mural in the area depicts a frog sitting on a level. The historic of the old runs through Frog Level and still carries freight rail traffic from which now owns the line.

* Hazelwood - Due to financial troubles, this once independent town ceased to exist and was annexed by Waynesville in 1995

* Laurel Ridge - The Laurel Ridge neighborhood is connected to a country club of the same name, and features a golf course, pool, tennis courts, and upscale mountain homes.

* West Waynesville - The once industrial part of town. A large shopping center called Waynesville Commons now sits on the site of the old Dayco factory and includes a Super Center.

* Russ Avenue - The newer business district, which features restaurants, retail stores, auto dealerships, banks, grocery stores, and the like. Russ Avenue is the most traveled surface street in Haywood County.

The "Battle" of Waynesville

Waynesville was the scene of the last and perhaps most unusual skirmish in the eastern theater of the . On May 6, 1865, Union Colonel William C. Bartlett's 2nd North Carolina (Federal) were raiding, pilaging, burning homes and engaging in other activities to undermine the economic base of the area and were attacked at White Sulphur Springs (east of Waynesville) by a detachment of rebels from the Thomas Legion of Highlanders, who had been summoned for help by locals. East of the Mississippi, Thomas' Legion fired "The Last Shot" of the Civil War in White Sulphur Springs, North Carolina. The Legion consisted of soldiers who had served under Jubal A. Early during the Campaigns of 1864, but had been sent back to their native North Carolina mountains to engage in guerrilla warfare against the remaining Union forces.The disoriented Union soldiers retreated into Waynesville, and on the evening of May 6 remaining elements of the Thomas Legion surrounded the town. The soldiers lit numerous bonfires on the ridges above the town and engaged in war chants in an effort to intimidate the Federals. The following day the Confederate commanders Gen. James Green Martin and Col. (for whom the Legion was named) negotiated a surrender. These commanders had been made aware that Generals and had already capitulated, and that continued hostilities would prove pointless.

Waynesville is serviced by two or more freight trains daily via the and is connected to Interstate 40 and the rest of Southwestern North Carolina via the giving it easy access to and Asheville. There is no airport in Haywood County mostly due to its close proximity to the and Knoxville's . Asheville is about a 30 minute drive east, Knoxville is an hour and a half to the west.

Waynesville’s watershed is located southwest of the town and covers an area of convert|8400|acre|km2 of town-owned land on the headwaters of Allens Creek making it much larger than the town itself (7.9 square miles.) Tributary streams within the watershed flow into the Waynesville Reservoir, a 50 acre man-made lake created by a dam on Allens Creek. The reservoir and surrounding watershed are classified by the State of North Carolina as WS-1. This classification is the state’s most stringent and forbids development within the watershed boundary.

Waynesville attracted national media attention in 2005 when , the pastor of , expelled nine church members because they had voted for , the Democratic candidate in the 2004 United States . Forty other members of the church resigned in protest and the pastor was eventually forced to step down under pressure from his congregation and other members of the community. [http://www.usatoday.com/news/nation/2005-05-07-church-politics_x.htm USA Today Story] The town also received repeated media attention throughout the 1990s due to a lawsuit by the on behalf of atheist and gadfly Richard Suhre, who had moved to Waynesville from Indianapolis, Indiana. Suhre perceived discrimination when he refused to swear on the Bible during an unrelated court case in 1994, which he subsequently lost. With support, Suhre sued Haywood County to remove a courtroom plaque displaying the . Many local Protestant groups rallied to defend the Decalog during the late 1990s, sporting bumper stickers reading "I Support the Ten." Churches also promoted the argument that the display had been part of the original courthouse, which had been zoned historical. However, little historical argument was forthcoming in the vituperation that followed in the press. Suhre's lawsuit was dismissed by the conservative District Judge Lacy Thornburg on several occasions. This controversy formally ended with Suhre's death in late 1999, but ACLU efforts to rekindle the case proved ineffectual, owing to an unusual court ruling in 2000 that new plaintiffs could not "inherit" Suhre's case. The Decalog display still remains in the old county courthouse, which has been eclipsed by the newer -- somewhat secularized -- Haywood County Justice Center on Main Street.