The North Carolina State Capitol is the main house of government of the U.S. state of North Carolina. Housing the offices of the Governor of North Carolina, it is located in the state capital of Raleigh on Union Square at One East Edenton Street. The cornerstone of the Greek Revival building was laid with Masonic honors by the Grand Master of the State Simmons Jones Baker on July 4, 1833.[3] Construction was completed in 1840.[4] It was designed primarily by the architectural firm of Ithiel Town and Alexander Jackson Davis. Often credited solely to that team, the design of the capitol was actually the result of a sequence of work by William Nichols, Sr. and his son William Nichols, Jr., Town and Davis, and then David Paton.[5] The Capitol housed the entire state government until 1888, and the North Carolina General Assembly met in the capitol building until 1963 when the legislature relocated to its current location in the North Carolina State Legislative Building. The offices of the state Lieutenant Governor were situated in the capitol building continuously until 1969, when the Lieutenant Governor relocated to the Hawkins-Hartness House a few blocks away on North Blount Street. The current Lieutenant Governor has reoccupied an office in the capitol building. 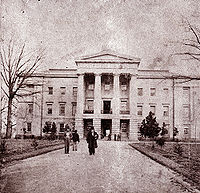 The Capitol as it appeared in 1861

The North Carolina Supreme Court has also convened in the building in the past. The Governor and the governor's immediate staff has continued to occupy offices in the building.[6]

The Capitol was declared a National Historic Landmark in 1973.[2][7]