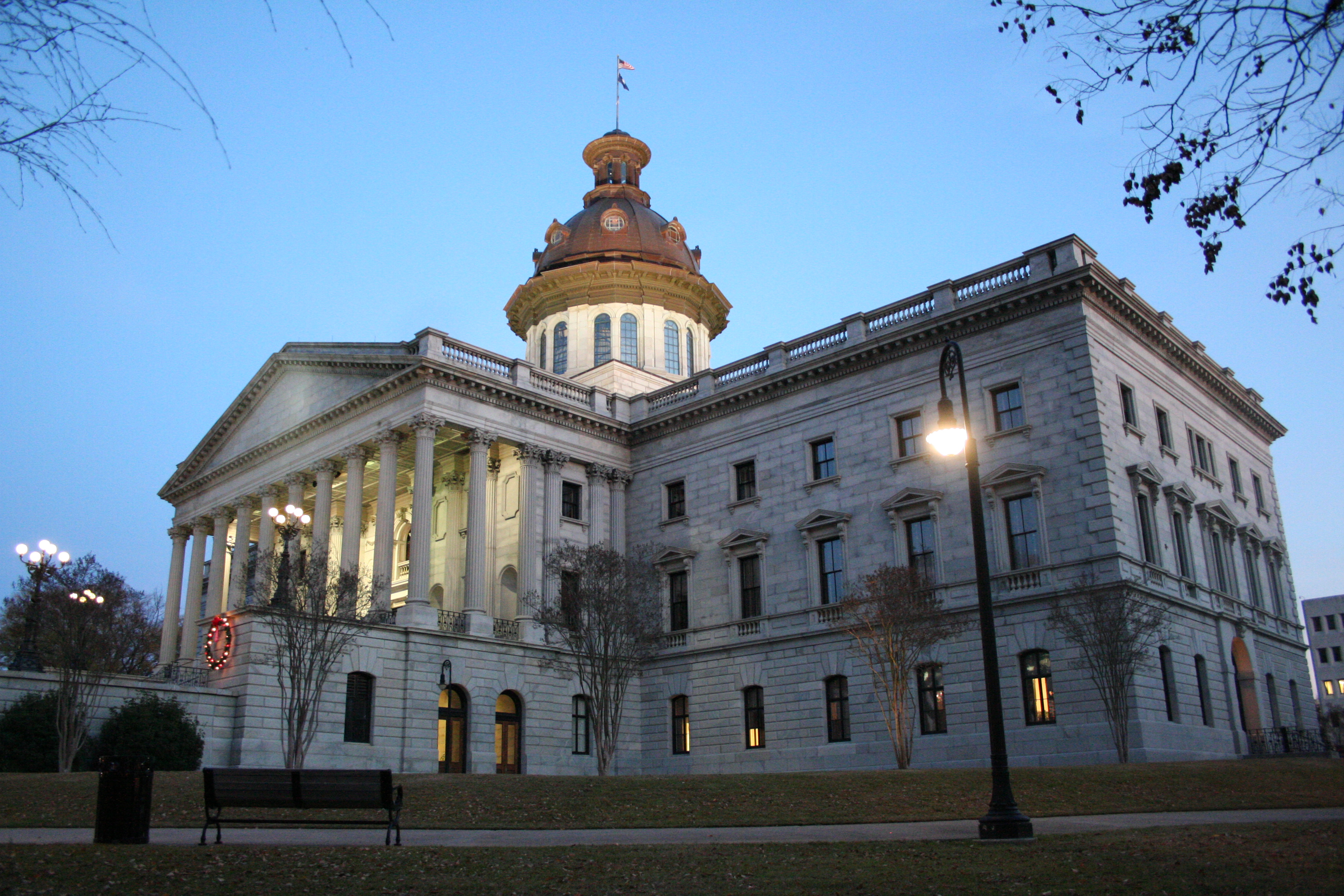 caption =The South Carolina State House
location=
lat_degrees = 34
lat_minutes = 0
lat_seconds = 1.56
lat_direction = N
long_degrees = 81
long_minutes = 1
long_seconds = 59.33
long_direction = W
area =
built =1855
architect= ; Et al.
architecture= Greek Revival
designated= , The South Carolina State House is the state capitol building of the of . The building Houses the , and housing the offices of the Governor and Lieutenant Governor of South Carolina, it is located in the capital city of Columbia near the corner of Gervais and Assembly Streets.

. Although several public buildings were "put to the torch" when United States troops entered the city, the capitol building was not. The structure was, however, damaged by artillery and smoke from the burning of adjacent structures. The building was finally completed in 1907. The current State House weighs more than 70,000 tons and has 130,673 gross square feet. The building is approximately convert|300|ft|m long, convert|100|ft|m wide and convert|180|ft|m tall. Today, the copper-domed granite building wears six bronze stars to mark wartime shell/cannonball hits.

The building was controversial during the 2000 U.S. presidential campaign for flying a . [ [http://archive.salon.com/politics2000/feature/2000/04/18/mccain/index.html Salon.com Politics 2000 article for one preliminary reference on this topic] ]

The capital has undergone two major renovation projects. The first occurred from 1959 through 1969. The planning phase for the second renovation occurred from 1991 to 1995. The second renovation addressed a number of problem areas that were not addressed during the first renovation and modernized the building. The renovation began in 1995 and lasted until mid 1998. The work balanced the need to meet modern code requirements and improved efficiency against a respect for historic form and appearance. Main enhancements were structural improvements, the sophisticated electrical wiring, alarm systems, or the state-of-the-art earthquake isolators that were installed. The renovation restored the House and Senate chambers, the 19th century treatment of the lobby, the vaulted brickwork in the hallways of the lower floor, the restored marble floors and refurbished interior of the dome. The total cost of the project was approximately $48,000,000. The State House was reopened on , .

style, first designed by John R. Niernsee. The buildings main structure was completed in 1875, and renovations were made to the original building in 1907, 1959, and 1998.

The rotunda is decorated with a painted masterpiece, and is really two domes: an inner which is seen by visitors on the inside and the main copper dome from the outside.

The South Carolina State House is also known for its distinctive cooper dome which adorns its roof.

The State House was designated a in 1976.

The South Carolina Department of Archives and History states:"Vienna-born architect John Niernsee began the structure in 1851, but the Civil War and post-war poverty slowed progress on the building.... From 1888 to 1891, Niernsee’s son, , served as architect and much of the interior work was completed. In 1900 Frank Milburn served briefly as architect, but was replaced in 1905 by who finally finished the exterior in 1907."