A club team was established at the school in 1937, and elevated to varsity status in 1949. Despite its relatively brief history as a Division I team, Carolina rose to national prominence in the late 1970s under Hall of Fame coach and former Johns Hopkins Blue Jay Willie Scroggs.[1] Between 1980 and 1996, the team failed to qualify for the NCAA tournament just twice. During that span, Carolina also secured 11 ACC titles. In 1981, the Tar Heels began a 26-game winning streak, and won the national championship that season and the next. As of 2009, Carolina ranked sixth in terms of tournament appearances, behind Johns Hopkins, Maryland, Virginia, Syracuse, and Navy.[2]

The first lacrosse team was formed in 1937 at the club level. At the time, they used old equipment from the football team and competed in the Dixie Lacrosse League against Duke, Virginia, Washington & Lee, Loyola, and the Washington Lacrosse Club. In 1949, the university conferred varsity status on the team, and in 1950, North Carolina became a member of the United States Intercollegiate Lacrosse Association (USILA). The following season, goalie Nick Sowell became the Tar Heels' first All-American when he was named to the USILA Honorable Mention team.[3] 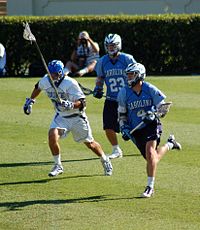 Carolina players in action against Duke in the 2009 ACC final.

In 1954, after compiling a combined 14-43-1 record in its first six seasons, the varsity team was disbanded by the administration in order to focus on other sports. Lacrosse returned as a varsity sport in 1964. In 1974, Paul Doty took over as head coach. That year, the school started awarding scholarships for the sport and was promoted from the small college level (now Division II and Division III) to Division I.[2]

In 1991, first-year head coach Dave Klarmann replaced Willie Scroggs, and led the Tar Heels through an undefeated regular season. Carolina extended its winning streak throughout the postseason, first winning the ACC tournament, and then defeating Loyola, Syracuse, and Towson in succession to post a perfect 16–0 mark and capture the NCAA national championship. Klarmann's teams repeated as ACC tournament champions in 1992 before advancing to the NCAA Championship final, where they fell to third-seeded Syracuse, 13–12. In 1993 and 1994, Carolina again captured the ACC title, but suffered early exits in the NCAA tournament. In the late 1990s, the Tar Heels struggled, alternately, to qualify for or advance in the NCAA tournament.[2] John Haus replaced Klarmann as head coach for the 2001 season. In his fourth year, Carolina advanced to the NCAA quarterfinals before losing to Johns Hopkins, 15–9. They returned to the NCAA tournament and quarterfinals in 2007, where they were defeated by second-seeded Duke, 19–11. In 2008, Carolina was knocked out of the first round by Navy.[2]

The following year, alumnus Joe Breschi, former Ohio State coach, took over at his alma mater. North Carolina surprised some observers when the team returned to the NCAA quarterfinals, before losing to Duke, 12–11. In 2010, The Baltimore Sun commented that "it's no longer a question whether Breschi can rebuild North Carolina, but when the Tar Heels will arrive."[4] In his second season, Carolina again advanced to the quarterfinals before losing to Duke, 17–9. That season, North Carolina swept the ACC postseason awards, with Breschi named ACC Coach of the Year, junior attackman Billy Bitter named ACC Player of the Year, and Marcus Holman named ACC Freshman of the Year.[5]