The university fielded its first varsity baseball squad in 1867, making baseball the oldest varsity sport at the University of North Carolina.

The Tar Heels reached the College World Series four consecutive years starting in 2006. They reached the national championship game in both 2006 and 2007, but lost on both occasions to the Oregon State University Beavers. They made a third straight trip to Omaha in 2008, and a fourth for the 2009 CWS. While Boshamer Stadium was being rebuilt during 2008, the team played their home games at the USA Baseball National Training Complex in nearby Cary. They returned to Chapel Hill in February 2009.[1] 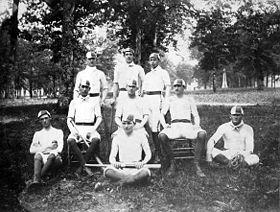